Kansas celebrates a goal int the first half of a 2-0 Big 12 soccer tournament victory over Baylor on Friday, Nov. 6, 2015, in Kansas City, Mo.

Kansas City, Mo. — Friday was an all-around milestone day for Kansas University’s soccer program, as the Jayhawks advanced to the Big 12 tournament championship game for the first time in school history with a 2-0 victory over Baylor at Swope Soccer Village.

“We’re so happy right now,” senior Liana Salazar said. “I think we deserve it. We have played really good during all our season.”

Salazar made some history of her own to lead the No. 6-seeded Jayhawks past the No. 2 Bears in the semifinal matchup by scoring both of KU’s goals.

The senior from Bogota, Colombia, put KU on the board in the 35th minute after freshman Grace Hagan dribbled in and out of traffic in the corner before finding Salazar at the top of the 18-yard box. Salazar ripped her 27th career goal past BU goalkeeper Sara Martinson, and moved into sole possession of second place on KU’s all-time list. Caroline Smith owns Kansas’ all-time record with 51 career goals. 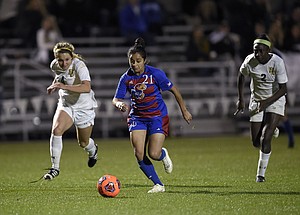 “It means a lot to me just to be able to make history today,” Salazar said. “I’m extremely happy for myself and the team, the coaches — we all deserve this.”

Salazar nearly earned an assist a minute later when she sent a throughball to Ashley Pankey, but the KU junior forward was not able to lift the ball over Martinson when she came out of the net for the save. The Jayhawks used the momentum of Salazar’s goal to outshoot Baylor, 8-4, before the break.

Kansas (10-8-2) continued to hold Baylor at bay after the Bears threatened early in the half, and Salazar sealed the win in the 78th minute with an insurance goal.

“Li was unbelievable tonight,” KU coach Mark Francis said. “When you have big games like this, big-time players step up, and Li is obviously a huge player. She basically took the team on her back and said, ‘I’m just going to take the game over for us.’”

Salazar came out of a five-player scrum before breaking away and pushing the ball past Martinson from 15 yards out. Despite getting banged up more than usual, Salazar said the punishment was worth it.

KU sophomore goalkeeper Maddie Dobyns and the Jayhawk backline of Morgan Williams, Kayla Morrison and Aurelie Gagnet held off the Bears for the remainder of the match for the team’s sixth shutout of the season. Dobyns recorded two saves after tying a career-high with stops in a 2-1 victory over Texas Friday in the quarterfinals.

“Our backs — Mo (Williams), Relie (Gagnet) and Kayla (Morrison) have been unbelievable this year,” Francis said. “We don’t have any cover in the back (from the midfield), and they know that, so that is a lot of pressure.”

Awaiting Kansas in Sunday’s championship game is Texas Tech, after the 5-seeded Red Raiders knocked off No. 1 seed West Virginia, 1-0, in Friday’s other semifinal.

Big 12 Offensive Player of the Year Janine Beckie scored in the 74th minute against the No. 2 nationally ranked Mountaineers.

“Janine is a special player,” Francis said. “She’s like Liana for us for them. She comes up big in the big games, and she did today.”

TTU is riding a four-game winning streak going into the Big 12 championship game Sunday, which dates back to a 1-0 victory over Kansas on Oct. 23 in Lubbock. Beckie found the back of the net in the 56th minute for the lone goal of that match.

The Jayhawks and Red Raiders will square off at 3 p.m. Sunday in the conference title match, which will be televised on Fox Sports 1. The winner will earn an automatic berth to the NCAA Div. I tournament.

Rock chalk! Might as well win it since we've come this far.

Rock Chalk -- looking forward to the game! There are still tickets available at Swope Park -- hope to see you there!