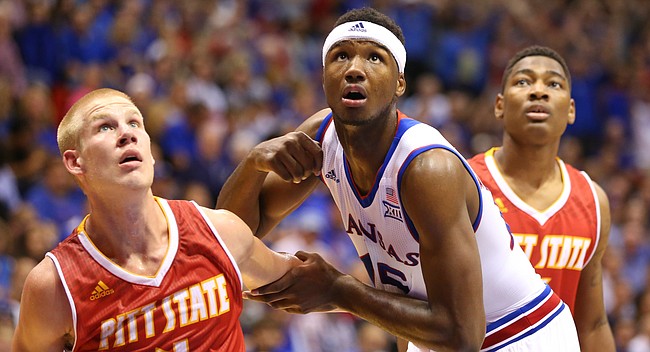 As expected, KU coach Bill Self started Wayne Selden Jr., Frank Mason III and Devonté Graham together in the back court and Perry Ellis in the front court. The fifth starter turned out to be Landen Lucas, but true freshman forward Carlton Bragg stole the show and wound up starting the second half in Lucas' place.

Bragg, in his first game at Allen Fieldhouse, finished with 14 points, six rebounds, two assists, two blocks and a steal in 21 minutes.

As for the rest of the stat sheet, the usual suspects filled it up, with Ellis leading Kansas with 22 points and 12 rebounds, Mason adding 14 points in 25 minutes and Graham putting together the most complete line of the night — seven points, eight rebounds, eight assists.

Images from Wednesday night's exhibition between the Jayhawks and Gorillas at Allen Fieldhouse.

• The game turned when: The Jayhawks pushed what was a tightly contested first half into a laugher during the final few minutes of the first half. A pair of PSU free throws at the 4:05 mark pulled the Gorillas to within 31-25. From there, KU outscored Pitt State 15-3 to close the half and take an 18-point lead into the locker room. Hunter Mickelson, Ellis and Graham did most of the damage during the devastating run.

• Offensive highlight: With 15 seconds to play in the first half, Mickelson followed up a Bragg miss in transition with a dunk that left him hanging on the rim and riding the back of a Pitt State player. Mickelson, who had a breakout performance in Korea this summer, appeared to pick up right where he left off and looked active, aggressive and smooth for most of his minutes in this one.

• Defensive highlight: It wasn't necessary a highlight, but it was pretty. Early in the game, moments after he checked in for the first time, Mickelson closed out on a jump shooter and blocked the shot from about 15 feet away. The block was indicative of exactly the kind of little things that Mickelson can bring to this team and the senior forward finished with four of KU's nine blocks on the night.

• Key stat: Pitt State shot just 28.2 percent from the floor in this one, proving that no matter how on or off KU is on the offensive end, the Jayhawks can be awfully tough to beat if they bring it on defense. Clearly Kansas had the size, strength and depth advantages at every position in this one, but that didn't matter early when the Gorillas were able to hang in there. When KU turned it up defensively, though, PSU had no answer. This team's depth and length defensively should be able to do that to most opponents this season.

• Up next: The Jayhawks will close out the exhibition schedule at 7 p.m. Tuesday against Fort Hays State before opening the regular season Friday, Nov. 13 at home against Northern Colorado.

— See what people were saying about the exhibition during KUsports.com’s live coverage.

If one of the key objectives for the Hawks was to turn down the volume on the high expectations, they certainly did a good job. For 36 minutes PSU and Kansas played even.􏰆􏰱 􏰮􏰞􏰝􏰅􏰕􏰄􏰝􏰉􏰫􏰒􏰡􏰉􏰝􏰭􏰕􏰴Selden, who excels in off-season performances, made Gustafson (20, 8) look like some kind of All-American with all those blow-byes. Greene and Mykailiuk reinforced widely held opinions they can't play much defense and excel mostly with practice shooting.

C'mon guys, you have to quit reading your press clippings and play some ball.

Reminds me of a story about Wayne Gretzky and his dad. Gretzky was playing an away game, as a youth, and thousands had shown up to see the wunderkind. Gretzky had an average night, and his dad explained to him that he had a bigger responsibility than the other players to play well, every night.

I expected a 40-point blowout - which is not an unreasonable expectation. This should have been a walk-over. No excuses, please.

So is MJ, who always came to play even when bedridden with the flu. Gretsky is good example. Maybe The Great One should have a heart-to-heart with Dustin Johnson, who is "partners" with his daughter Paulina.

So in other words, nothing has changed since the past two seasons. Another 10-loss season and another first-weekend NCAA Tournament flameout on tap.

And at what point do fingers start to point at the coaching staff?

I disagree on one point. Svi's defense hasn't been in question. Yes he still makes mistakes but his effort is better than Greene's.

Gustafson scvored most of his points against Selden (who usually plays better defense) and Greene but to be honest, the Greene, Selden, Svi combination looked like a replay that could have been plucked from the majority of last year's games.

And why did Lucas start? I thought Coach Self had stated something about his injured ankle but if true then why start him? He looks like he needs a second redshirt year.

Bright spots were Ellis (slow start before you started to dominate) and Bragg. Bragg came to play and really showed why he was our first commitment last year. I also thought that Vick did well in the limited time he had on the court.

Overall, nothing to be excited about, except for Carlton and Hunter. Frank looks confident and reliable. Perry is an accident waiting to happen. But most discouraging is the simple fact that Selfs system does not have a place for sharpshooters like Greene and Svi. Its like having great running backs in an Air Raid offense or great receivers in a run heavy system. I don't understand why any top PG or SG would come to KU, which probably explains why Frank and Devontae are starting, both of whom were not highly recruited. Sigh, maybe everything will click against Mich. St.

Didn't Perry lead the team in points and rebounds? Is there a point where this kid gets credit for what he does?

I've watched every play Perry has made and except for the Michigan game in the NCAA tourney I can't remember ever watching him without feeling like a bipolar schizo. One play he looks great then he can't hold on to the ball and then he's turning it over like crazy then he begins to mope around. Frankly, I think Carlton is already a better player, just lacks experience

Alert me when the NCAA begins adding style points to the results of basketball games.

Maybe it's just about The end result to you but I happen to enjoy a well played basketball game where KU dominates the opponent while making great athletic plays that make the fans go crazy...and then of course win the game

Why does everyone have such a urge to bash Perry? He played great today leading the team with 22 and 12. What do you want 50 and 25 from him to be satisfied? Perry is a great fundamental player that is a great asset to this Jayhawk team. Get off him. Given his athleticism and skill set, he does about as well as you'd expect from him.

I will agree that Bragg has a higher ceiling than Ellis but Ellis will be our key player in the paint this year. A fourth year starter who started slow but then dominated the second half.

I also agree that Ellis is not the most consistent player but when you look at the stats, he usually is at or near the top in scoring and rebounds. Bragg is not seasoned enough to start over Ellis. Experience
is year's key to a long run in the NCAA tournament.

Ellis had a nice game, especially in the second half. Our very major weak spot was on the wing were we had poor everything ...shooting, defense, rebounding, .... you name it and it was a poor wing show.

You must be stoned!

Ok, maybe I should take yalls word for it, Perry has reinvented himself, the last 3 years were a fluke and the flashes of the old Perry tonight (like being the first person subbed out bc of bad plays) don't matter. Great, thanks!

Very poor showing defensively today against a Div 2 team! Unbelievable how many times Svi, Wayne and Brannen got beat off the dribble and there was no helpside defense. I am confident Self will get this fixed come regular season and I'm sure having Diallo will help. Giving their showing in Korea, I'm sure they didn't just forget how to play defense... just a poor effort. Maybe just maybe Self isn't wrong about jacking up threes being "fools gold". I've seen alot of post about how this is a strong guard oriented team and thus Self should back off his high low offense. Sure hope you and I weren't watching the same team today! Best players by far today..post players... Hunter.Carlton.Perry. GET THE BALL INSIDE. Also sure hope Svi doesn't turn out to be a practice player who disappears under the lights. Really disappointed by his effort and overall performance today. But I guess in perspective; according to Bill they weren't very well prepared due to Diallo's eligibility meetings all day, it's just the first game and Pitt played a good game. They'll be just fine! Rock Chalk!

According to the article and box score, PSU shot 28.2% from the floor. How is that a poor showing on D?

I understand what you mean. However, I suppose I was generally referring to perimeter defense by Svi. Wayne and Brannen in particular. Way to many poor close outs and blow bys for a veteran team. Also second half ku out scored them 43-38. Other than that run at the end of 1st half and small run at the end of the game. Pitt went score for score with the Hawks. Good defense percentage wise I suppose but just seemed like they struggled to get stops against a D2 school. I'm not worried or anything but they could have done a better job.

I respectfully disagree Bryce. The low-scoring percentage was more due to missing shots then anything Kansas did on the court.

if you're going to complain so damn much about how we played in the FIRST exhibition game don't even theow your two cents on here, and don't bother watching the games. I mean we are another 10 loss team with another 1st round tournament flameout on tap, right??? Might as well not even watch.

Could be wrong but pretty sure that was meant as sarcasm.

What's up with all the pessimism? Sure the defensive intensity and perimeter play were not up to par, but I feel like this team has a lot of potential. Ellis and Bragg were really dynamic when they were on the floor together. Graham nearly had a triple double. Mickelson looked like a completely different player than he was last season.

There is a ton of talent on the perimeter. Why else would NBA scouts be drooling over Svi? The 3 pointers will fall eventually, and the defense is bound to improve. On top of all that, we will hopefully add the Diallo to the mix soon and get him some reps. Relax. I think this will be the best team we've had since 2012, once they are given a chance to gel. Rock Chalk.

Has anyone here ever heard of the phenomena of teams "playing up or down to their competition?" The upcoming Michigan State game will be a much better barometer of where we are, and not our exhibition against the Pittsburgh State Gorillas. Everyone take some deep breaths...inhale...exhale...inhale...exhale...

KU has played down to lesser competition for most of Self's tenure here. This shouldn't come as a surprise anymore.