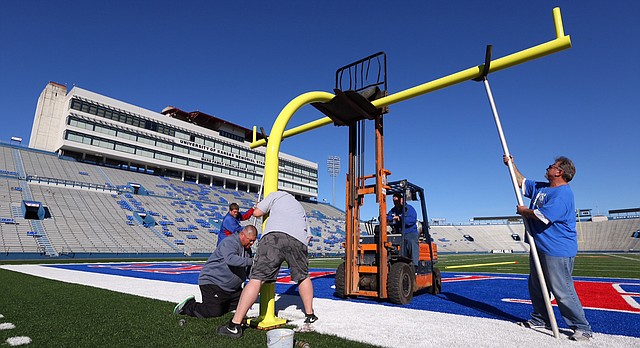 The goal posts came down Sunday night, but it wasn't for a KU victory.

Several individuals broke the lock on the south gate to Memorial Stadium after the Royals' World Series victory, took down a football goal post and tossed it into Potter Lake. KU officials confirmed the incident this morning and said athletic department officials were disappointed that the celebration included vandalism.

"I thought the slogan was 'Take the Crown' not 'Take the Goal Post,'" joked KU associate athletic director Jim Marchiony. "We're all thrilled about how the Royals have played all year and we're excited that they won the World Series. I just wish that some folks had chosen to celebrate in a different way. The personal safety issue here is what really worries me, and clearly no thought was given to that. The rest of the disappointment just lies in the destruction of property."

The individuals did damage to the stadium gate and the goal post itself.

He asked that anyone who has information about the vandalism to call KU Public Safety at 864-5900 or Crimestoppers at 864-8888.

By mid-morning Monday, the goal post had been replaced inside the stadium.