When senior right-hander Drew Morovick stepped onto the mound to start the eighth inning Saturday at Hoglund Ballpark, Kansas University’s baseball team owned a three-run lead and was in complete control of its biggest game of the year.

Yeah, Kansas (22-32 overall, 7-15 Big 12) has one game remaining in the Sunflower Showdown — first pitch is slated for 2 p.m. today — but there will be no baseball for the boys in blue after that.

Saturday’s fall-from-in-front, 6-4 loss to Kansas State locked the Jayhawks into the ninth spot in the Big 12 standings, which means KU will stay home next week while the rest of the conference heads to Tulsa, Oklahoma, for the Big 12 tournament.

“Obviously, that’s a devastating loss for us,” KU coach Ritch Price said in front of a disconsolate KU dugout following Saturday’s loss. “We got the start from Drew Morovick that we needed to get the ball to (closer Stephen) Villines late in the game. That was a tremendous college baseball game. We just got beat.” 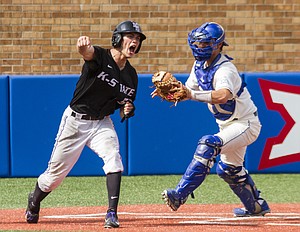 Kansas State junior Clayton Dalrymple lets out a yell after slipping past Kansas sophomore catcher Michael Tinsley to score the go-ahead run in the top of the ninth inning of their game Saturday at Hoglund Ballpark.

Through seven innings, Morovick had given up just one run and five hits while striking out three and letting his defense play behind him. But in the eighth, three consecutive hits by the Wildcats, which cut KU’s lead to 4-2, forced KU pitching coach Ryan Graves to make the move to Villines. Three more hits and two runs later, the teams went to the bottom of the eighth tied at 4.

“I think coach Graves’ was trying to get (Morovick) through the two left-handed hitters before he went to Villines,” said Price, asked if he gave any consideration to letting Villines start the eighth.

Morovick’s confidence and first seven innings certainly might have had some impact on the decision.

“I told Graves I wanted the ball,” an emotional Morovick said. “I wanted to battle for my team, and if we were gonna lose, I wanted it to be on my shoulders, nobody else’s. It’s just hard knowing I let my team down today.”

KU catcher Michael Tinsley, who finished 2-for-4 with an RBI, said he felt good about the Jayhawks’ sending Morovick back onto the field for the eighth.

“Drew will go 20 innings if it’s his choice,” Tinsley said. “I didn’t see any type of fatigue. It’s just they had seen him for eight innings, and they put some good swings on the ball.” 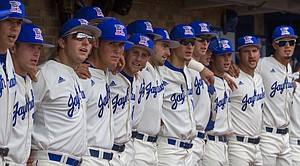 Kansas players come together in the dugout to sing the alma mater before the start of their game against Kansas State Saturday at Hoglund Ballpark.

Those swings carried over to the hard-throwing Villines, and K-State scored five runs on six hits in the final two innings. That included a double and a triple in the top of the ninth that gave the Wildcats (26-27, 10-13) their first lead of the day.

“It pretty much sums up our year,” Price said of the heartbreaking collapse. “We’re real close to being good, and we’re not quite good enough to get over the hump.”

Now all that’s left for the Jayhawks is to try to send seniors Morovick, Connor McKay, Blair Beck, Justin Protacio, Dakota Smith, Colin Toalson and Joe Luvisi out on a winning note.

“We’ve just gotta do what we’ve done this entire season, just show up and treat every day like it’s a new day,” said Tinsley, a sophomore. “We’ve gotta find a way to salvage the weekend.”

Added Price: “We’re gonna play to win, obviously. I start the four seniors anyway, and one of the things we preach to our guys is, you gotta play every day.

“So we’ll walk in here tomorrow and try to play as well as we played today.”

Can we please move on from Price? This is something like the 5th time KU has completely missed the Big 12 tournament in 12 years. There is nobody that can realistically say this program is in any better shape today than when Price got here. His resume is barely better than Bonnie's was. 3 tournament appearances in 12 years in a major conference that routinely sends about half the league every year and regularly has at least one team in the CWS.

Fire Price and bring in a coach that generate enough interest in the program to make Hogland a Big 12 caliber stadium? When was the last a KU baseball game from Lawrence was on national or even regional TV? Fox College and ESPN don't air baseball games from Lawrence because Hogland is a dump compared to other stadiums.

Not going to happen. Price has led the program to its ONLY winning league seasons since the Big 12 was formed. I'm pretty sure he just signed an extension as well. The arms just let us down all year; and we couldn't clutch hit....a devastating combo. We blew a four run lead going into the bottom of the ninth vs OU; we lost at home to UT 2-1 in 14 innings; and we led yesterday 4-1 going to the eighth inning. Those three games are the difference between 10-12 and 7-15. Baseball at KU is just like a lot of our other non mens basketball teams; roller coaster rides with a few highs and plenty of lows. Would I like more consistent winning? Of course. But our baseball team is doing decently over all. Let's just beat the kitties today; Go Jayhawks!

I'm just saying he's not getting removed from the gig, one year after leading the program to the best league record in history. Here are my goals of any of our programs: (this has changed over the last few years because of the teams changing in our league) Winning league record Qualifying for post season Beating KSU, ISU and OSU on a regular basis. (Used to be NU and MU) are peer schools in size and we compete against for recruits.
Again, goals. Do we hit these every year with our programs? I don't think so. Did we hit them this year in baseball? No. Last year? Yes. 2013? Pretty close. Like any program, we want baseball to do well. The prior six years, pretty good; and last year was pretty darn good. This year was a setback; we were pretty young. This coach deserves to see it through.

When is being young going to stop being an excuse for Price defenders. I hear that line every year and it's total crap. Look at the progress the softball team has made in 6 years under Megan Smith. They were terrible in her 1st season and have been steadily trending upward every year and have now made back to back NCAA tournaments, something Price has never done.

If this was Price's 4th year, I would be in favor of letting him try to build a consistent winner. Reality is he's been here 12 years and has yet to have any positive consistency. If he hasn't been able to achieve that in 12 years, it's never going to happen for him at KU no matter how many years he gets.

Price is the man