Cheick Diallo had his TV tuned into the Bulls-Cavaliers NBA playoff game as he conducted a phone interview with the Journal-World on Monday night from Centereach, New York.

The recent Kansas University signee — who first started playing basketball in the winter of 2010 in his home country of Mali — said he enjoys immersing himself in the games of current players such as Monday night’s playoff stars LeBron James, Derrick Rose and Pau Gasol — as well as his favorite player, Blake Griffin of the Clippers, and some past greats.

“I like to go to YouTube and watch those that have played — (Michael) Jordan, Kobe (Bryant), (Hakeem) Olajuwan, (Tim) Duncan,” Diallo said.

Analysts believe the 6-foot-9, 220-pound senior from Our Savior New American High has the potential to make his own impact on the college and pro games. Diallo enters college as Rivals.com’s No. 5-rated player in the recruiting Class of 2015.

He was best of all blue-chippers in the month of April, earning MVP honors at both the McDonald’s All-America Game and Jordan Brand Classic and scoring 12 points in the Nike Hoop Summit.

“It means a lot to me,” Diallo said of being tapped MVP after erupting for 18 points and 10 rebounds at McDonald’s in Chicago and 26 points and 11 boards at Jordan Brand in New York “It’s a big honor to me because a lot of players cannot do that. I was proud of myself to get MVP of McDonald’s and Jordan Brand. I give credit to my teammates. There were a lot of great players in those games. They helped get me easy buckets.” 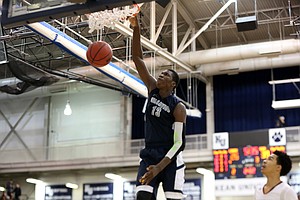 Diallo — he averaged 17.6 points and 10.5 rebounds his senior year of high school — certainly put in the effort to claim MVP in those all-star contests.

He seemed to out-run everybody, even the guards.

“That is natural. I used to play soccer when I was younger. I think that helps my speed and footwork. I don’t seem to get tired. I don’t know why,” Diallo said. “I definitely think it can definitely help me (in college),” he added of his ability to run the floor.

Diallo, who is known as a good shot blocker and offensive rebounder — “he treats missed shots of others as a pass to himself,” ESPN analyst Fran Fraschilla says — thinks he’ll fit right in playing for coach Bill Self at KU.

And where does Diallo’s game need help?

“My weakness was my free throw (shooting) and jump shot, but not really. I think I’ve improved from the free-throw line and shooting. I need to work on post moves, everything,” he said.

“I talk to him a lot,” Diallo said of the No. 3 pick in the 2014 NBA Draft who played a year at KU. “He tells me a lot of things. He said they help the big men. (You learn) a lot of post moves and post-up game. There’s a lot of big-man development.”

Diallo, who visited KU in September, cited other factors in choosing Kansas over St. John’s, Kentucky, Iowa State and Pitt.

“I like the players, and the campus was beautiful,” said Diallo, who has maintained a friendship with Wayne Selden Jr. and Frank Mason III via text. “There were nice people there. Everything was good.”

Diallo said he “would like to” remain on campus more than one year and isn’t thinking about the pros right now. His graduation date is set for mid June, thus he isn’t sure yet when he’ll arrive in Lawrence to begin working out with the Jayhawks.

“I’m really excited about getting there and about college,” Diallo said.

He said he appreciated all the KU fan support on social media after he announced for KU on April 28.

“They were going crazy,” he said of KU fans. “You can’t make everybody happy. Kansas fans were happy, but those other schools (fans) were mad.

“That’s the way it’s supposed to be,” Diallo added.

Can't wait to see him in a Jayhawks uniform...this is THE ONE I wanted us to get since I saw him in the McD scrimmage (and even more so after the rest of the all star games last month). I hope we get him for 2 years so he can be an All-American!

I agree, Shannon. CD was one of the guys we needed and could very well be the difference between a good season next year and a GREAT one.

I take the comments from young, potential OADs with a grain of salt about how long they will be on campus but the normal reality of their situation is a double edged sword. If they play well, they leave. In order for them to stay, they probably have to underperform. (I believe Cliff would have come back in a better situation) So, I hope the young fella kills it next year, hangs a banner and goes Lottery!

This is the first time in 3-4 years we landed a big recruit that fills a dire specific need. Most recently we needed a PG (Smart) and Center (Turner) to fill key team weaknesses, only to lose them at the very end. It feels doubly great to win out in a head-to-head competition vs KY and a home-town school.

With a mid-June graduation, he better hurry up to get to Lawrence or he will find nobody home upon arrival. Sounds like he'll catch the team in KC and a few days before they head out to the WUGs.

And it feels good to keep him away from Iowa State.

Has there been any word on the Alexander front? Or has the NCAA given up since he's going pro?

I haven't heard anything, but I hardly doubt we ever will know what happened. NCAA has more important things to worry about now - like making a homeless kid ineligible for crashing on a friends couch. You know, stuff like that.

Allison are you are insinuating the NCAA is out of control? If so I totally agree with you. The whole Alexander thing was much to do about nothing. Why is there any competitive advantage if a players parents can get a loan on the future worth of a player? It nothing to do about nothing. If anyone can get a loan that is not guaranteed by a university or contributor then more power to them. The only collateral ( as far as I know ) for this loan was Cliff Alexander's future earning power. If that is the case then it should be none of the NCAA's business. Period. I feel bad for Cliff and his teammates that the NCAA stuck its nose into something that had no bearing on competition of college basketball.

I beleive it will die a quiet death as long as no one in their family provides the paper trail. If that info should appear though, all bets are off.

I remember the NCAA going after players and programs as they did with Reggie Bush 6 years after he left for the NFL so assume nothing.

A story about the NCAA pursuing a program and a player long after leaving school isn't relevant?

Your hoping a quiet death ensues but until the NCAA rules, anything else is pure conjecture.

I don't believe anyone would say next year's team doesn't have all the pieces for a run at the NCAA title. I'm not saying that they are a lock or even the best team but the potential is there.

Bill Self has gotten us to the Final 4 every 4th year. if he misses this year I would call that a disappointing season. Let's see if HCBS is really as good as most believe he is.

I would say they do not have all the pieces for a NCAA tittle run. I am hoping we can get to at least the sweet 16 next season, that would be nice.

KU replaced two very good players with two very good players. We do not know how the new guys will handle the college game. Everyone else on the team is going to be one year older so that should help kind of, if they do not regress or not improve like Selden didn't this past season. A couple of guys are working through injuries they did not have last year too. Should be ok, but you cannot just pencil them in right now. We still have two open scholarships. Whoever we get at this point might not help that much, but I would like to see who our team is before thinking that we are set.

With respect I think it is just too early to think that.

I understand trying to remain practical, but with that in mind, what teams that were ahead of us last year do you think have kept their foothold? Because to me the many changes in next year's landscape of college BB will put a solid 2/3 seed from last year, that didn't lose ANY ground, in a very enviable position. It's not just how much we improved, but how much everyone else has lost and how little concentration of power there is in the usual locations. Since there is no OAD orgy this year, a top 10 team that returns 4-5 starters is going to be a contender barring some unforeseen twist of fate.

I think that you would be in the minority Rodney:

I know that pre-season picks are often wrong but w/Diallo, the national sports media has Kansas in just about every poll ranked in the top 5.

It's never too early to be really excited about next season. We have lots of returning talent, a roster with a good number of upperclassmen at pivotal positions, quality depth and we get the added benefit of a good amount of summer experience with the WUG and all the exhibitions and practices surrounding it. It will be HUGE for this team to get to utilize these extra practices.

sterling gibbs just stopped considering kansas.....any stories about whether or not KU is looking at anyone at this point? next year could be a huge exodus of players and leaving 2 empty scholarships this recruiting year doesn't make much sense

I sure hope we get at least one more player.

Having an open scholarship last year was understandable considering how late Turner went with his decision. I would hate to see this start to be a trend however.

Yes, they are still looking to add another big and a guard, but they're not going to just sign someone for just to fill a scholly.

Why commit a scholarship at this point to anyone we wouldn't extend one to early in the recruiting season? Better to use a couple on players w/potential to improve over a period of 2-3 seasons.

We are already deep in all but the 5 and Lucas is exactly the type of player who can use his experience against a better athlete. We have a great mix of experience and incoming top level athleticism.