To calm our fears, Photo Chief Mike Yoder suggested buying a cheap model, in this case the Syma X5C-1 quadcopter, which costs about $90 dollars and weighs only about 3.7 ounces, with the idea that we could practice flying and, well, crashing it with much less to lose before buying a more expensive and versatile model. 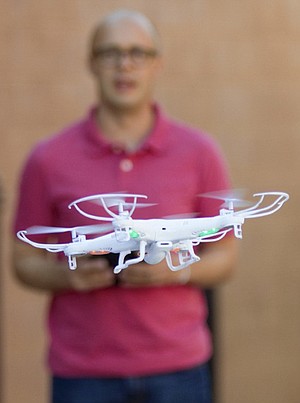 Journal-World Staff Photographer Nick Krug operates a Syma X5C quadcopter in the alley behind the Journal-World on Friday, May 1, 2015.

We got the drone a couple of weeks ago, and here’s how it’s going.

Day 1: Eager to fly it, I took the drone into an empty conference room at the Journal-World with the idea that I would just work on getting it up into the air and hovering a few feet off the ground. It didn’t take more than a couple of attempts before it had me backed into a corner. The plastic blades chopping at my arm felt like the cord from a low-power, electric weed whacker.

Day 2: Getting a little more skilled and with my 3-year-old well entertained and watching, I was able to keep the drone in the air for 30 seconds before letting it drift into a low-lying branch on my neighbor’s tree. No a big deal, I thought, as I fished it out with a garden rake.

Day 3: Feeling as though I needed much more space to practice, I took it to the home of a friend living in the county who has a relatively large and open backyard. Getting a little cocky, I accepted his challenge that I try to fly the drone 20 yards ahead, circle a maple tree and bring it back. With him watching and my daughter, who at this point is attached to the drone as if it were a family pet, hanging out behind me, I lifted it off the ground and started for the tree. Getting it there was no problem, but the circling part proved tricky, and the next thing I knew the quadcopter was 50 feet in the air, drifting over a tall line of trees and heading out of sight. At this point, for all I knew the drone was gone and my daughter, with tears in her eyes and sensing that I was a little panicked, said, “Daddy, where did the drone go?”

After searching the area and in every conceivable open spot we could access within what we thought was a likely area where it could have fallen, we decided to cut our losses. I sent Yoder a text letting him know that the drone was MIA and that we had called off the search. My daughter and I headed for home and I explained to her that dad lost the drone on accident, but that it was OK and we would likely end up getting another one.

Within three minutes of reaching home, I received a picture on my phone of my friend smiling with the drone in hand after spotting it in the middle of a dirt field considerably farther than where we had expected it to land. 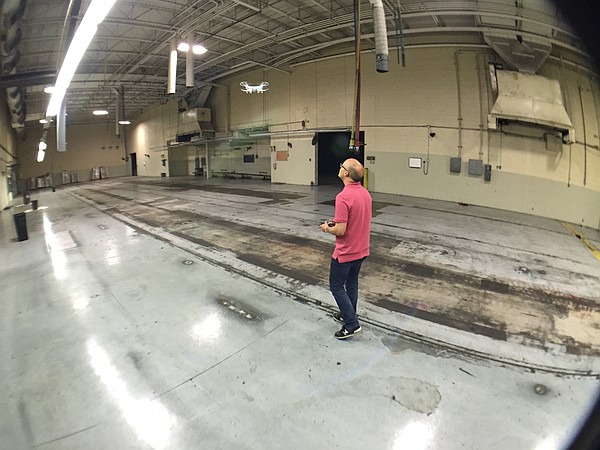 Journal-World photographer Nick Krug practices flying a small drone in the vacant room that once held the Journal-World printing press. by Nick Gerik

Day 4: Today, after deciding that flying the drone in the completely enclosed and vacant space where the Journal-World presses used to be might be a smart decision for the time being, I successfully circled a ladder 20 yards away and landed the drone at my feet.

It’s our hope that eventually, after we all have mastered flying the device, we will be able to use them for reporting in places where our line of sight is obstructed. At the very least, an aerial view even 10 feet off the ground can often give an interesting view of an ordinary scene.

We won’t, of course, fly this over anyone’s head or over traffic. Even though it’s super light weight, safety is going to be our first priority.