Omaha — He made just three shots in 32 minutes and took a beating every trip down the floor.

Holding New Mexico State big man Tshilidzi Nephawe to just 10 points may not have been the only key to Kansas' 75-56 victory in the opening round of the NCAA Tournament at CenturyLink Center on Friday, but it definitely did not hurt.

“We were doing some good things, trapping him and things like that, and I just felt like we did a good job holding him down on that block,” KU junior Jamari Traylor said. “He got a couple baskets, but he had to work for 'em.” 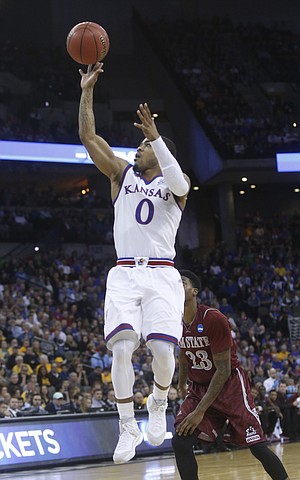 And it was not just the Jayhawks (27-8) whom Nephawe chose to work against. All game, when the officials called fouls on Kansas, Nephawe would lean into the ref and explain to him that they had been fouling him all game. Although that physical style is one Nephawe always has embraced, the 6-foot-10, 268-pound forward from South Africa admitted after the game that it got into his head during Friday's loss.

“In the beginning, yeah, I (got) frustrated a little bit,” Nephawe said. “They're big. They've got long arms. They double-teamed me right on the catch and there was just nowhere to go.”

KU sophomore Landen Lucas was the one Jayhawk who mixed it up with Nephawe more than anyone. And whenever the physical pounding and constant contact momentarily subsided, Lucas couldn't help but throw a little trash talk Nephawe's way.

“I just enjoyed it,” Lucas said. “It sounded like he was looking forward (to a physical game) and that's something that I enjoy, so we went at it. We both played hard and I respect him for that.”

As for the extra chatter, Lucas said using words as one of his weapons just happened.

“I enjoy that, too,” said Lucas with a smile. “But as soon as the game was over I went over and shook his hand and told him good job. But that's fun for us. It makes it a more competitive game and gets me more mentally into the game, as well.”

“We did a little bit,” he said. “But it was friendly. He was not bashing me or anything.”

Despite Nephawe's struggles inside, several Aggies (23-11) said KU's hot three-point shooting (9-of-13) and focused mindset made the difference.

“They looked like they were just prepared and they were ready to play us,” said 7-foot-3 center Tanveer Bullhar. “It was just a big game for them and they just took it the right way. They were mentally ready.”

Added Nephawe: “If we give somebody nine three-pointers, there's no way we're gonna win the game. They were just hot and we were not.”

KU and Wichita State will play at 4:15 p.m. Sunday. The game will be televised on CBS. 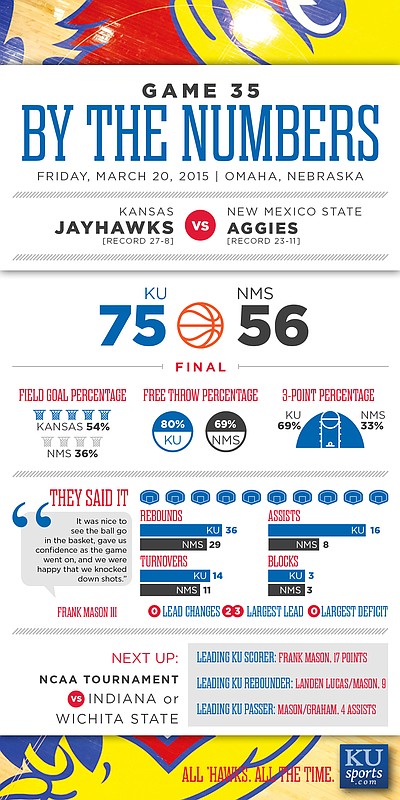 I enjoy watching Lucas grow all these years and am even excited for his contribution in big moment like this. He helps us tremendously playing as center. Let's move on to the next round and rock the shuckers.

Seems like the loss of Cliff Alexander has actually made us better on the interior because the seldom-used big guys are stepping up like never before. Anyone starting to think in terms of "addition by subtraction"? I sure am.

Who is that number 33, Lucas, guy out there in a Hawk jersey?

He's the stud playing through three injuries. He deserves the courageous player award if anyone does. We appreciate your grit and determination Mr. Lucas.

I was thinking the same thing. "addition by subtraction" I am glad Perry is getting better also, but him getting hurt when he did is turning into a blessing. We have so many good bigs that it has given them a chance to step up, and they have shown what they can do. We are a much better team now.