In the a national tournament to decide college basketball’s most valuable team, Kansas University isn’t the national champion, but it appears to be closing in.

The KU Jayhawks are worth $35.4 million, making them the second most valuable team in the country, according to Forbes magazine’s annual rankings published this week.

The University of Louisville Cardinals took the top spot for the fourth consecutive year. 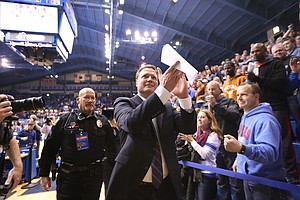 Kansas head coach Bill Self applauds the crowd as he leaves the floor following the Jayhawks' 69-64 win over Texas on Saturday, Feb. 28, 2015 at Allen Fieldhouse.

And yes, the Forbes report points out, just as the same handful of teams seems to consistently dominate on the court every March, the same rings true from a financial standpoint.

KU’s worth jumped up 7 percent from the previous year, according to the Forbes study. KU’s revenue was $31 million, and profits were $22 million.

“Last year ticket sales increased from $12.9 million to $14.5 million while the team saved nearly $2 million in coaching expenses,” the Forbes report said. “Head coach Bill Self’s contract includes $525,000 in potential bonuses each year, but that’s nothing compared to what he’ll be rewarded if he finishes out the 10-year deal — the final season could be worth more than $9.5 million.”

In its rankings, Forbes uses a weighted method accounting for how much money each team generates for its athletic department, its parent university and its fellow conference members. The 2015 list is based on financial data from the 2013-2014 season, adjusted to account for differing accounting practices among schools.

KU’s and other team’s valuations have inflated markedly in just the past few years.

The top team in Forbes' 2010 study, for example, was North Carolina with a worth of $29 million. That year KU was in fourth place, with a value of $24 million.

Here are the top 10 schools on Forbes 2015 list of college basketball’s most valuable teams.

You know what would put us over the top? Scheduling the Shockers!

It's those delicious nachos from the Salty Igauna that will put us over the top!!!

Actually a ridiculous article...everybody knows that the Jayhawks are PRICELESS!!!!

I think the assist goes to the student section, whose bellyachin' led to some lost seats that could be sold at a much higher price.

You believe what they want you to believe. IB