Cyclones storm back to beat KU in Big 12 title game

Kansas guard Wayne Selden Jr. (1) shoots a off balance shot as Kansas and Iowa State played for the Big 12 Championship on Saturday March 14, 2014

No. 2 seed Iowa State fought off a 17-point second-half deficit and topped No. 1 seed Kansas, 70-66, in a wild atmosphere at Sprint Center.

After a game like this, why would anyone even think about moving the tournament away from Kansas City? 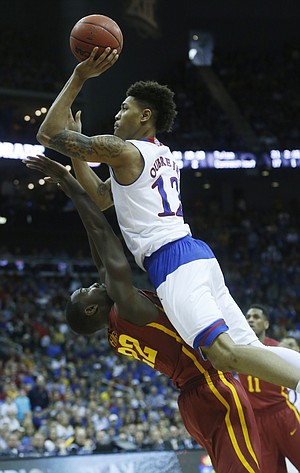 Self, Mason and Selden discuss ISU's rally and win in Big 12 title game

Kansas basketball coach Bill Self, as well as players Wayne Selden Jr. and Frank Mason III, discuss the Jayhawks' loss in the Big 12 Championship game to Iowa State, which rallied from a 14-point halftime deficit.

Both teams played hard, both fan bases cheered loudly and the team that made more plays in the final minutes came away with the hardware.

KU built a 14-point halftime lead with some more fantastic defense and hot shooting. But the Jayhawks looked like a different team in the second half. Offense became difficult and stopping Iowa State was next to impossible.

As KU coach Bill Self had done so many times this season by telling his team to just drive it to the rim and find a way to score, Fred Hoiberg's squad did that very thing during crunch time and could not be stopped. Bryce Dejean-Jones scored six of eight points for ISU on drives to the rim during a stretch that turned a 51-49 KU lead into a 57-51 ISU lead. That stretch also gave the Cyclones control for good.

Georges Niang led the Cyclones with 19 points and Wayne Selden Jr. led Kansas with a career-high 25 points. Selden's three-point play with just over a minute remaining tied the game at 63, but the Cyclones (25-8) made all the plays in the final minute to help pull out the victory.

• Offensive highlight: With Iowa State closing hard after falling behind by 17 in the opening seconds of the second half, Frank Mason III pushed the ball in transition and fired a 30-foot lob pass to Selden, who caught it with one hand, head eye-level with the rim, and flushed it with authority to push KU's dwindling lead back to two possessions.

• Defensive highlight: Chalk up another one for Hunter Mickelson, who, again in limited time, made his presence felt. With around 6:30 to play in the first half, Iowa State's Dejean-Jones drove to the rim with a head of steam only to have the longer and taller Mickelson recover, elevate and reject the shot in one fluid motion. The block keyed a KU fastbreak and served as further notice that Mickelson has a place in this team's rotation.

• Up next: The Jayhawks, like most of the rest of the teams in the country, will head to bed tonight wondering where they will be seeded in this year's NCAA Tournament and will find out at 5 p.m. Sunday during the NCAA Selection Show. Most analysts and people who like to predict such things have the Jayhawks pegged as a No. 2 seed but it will be interesting to see if Saturday's Big 12 title game loss has any impact on that.

More news and notes from Kansas vs. Iowa State in the Big 12 Championship 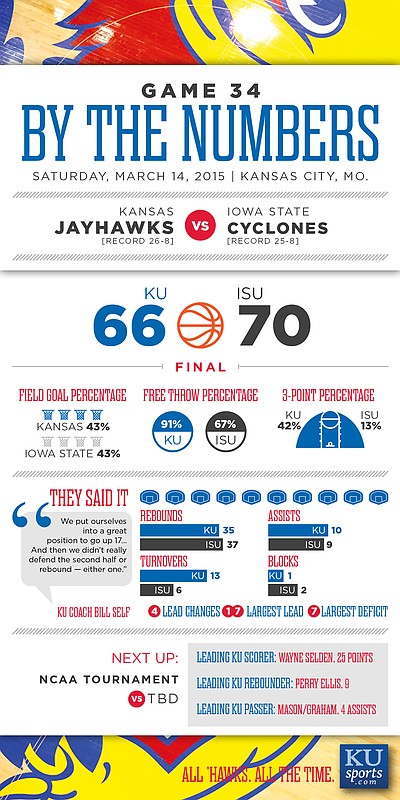 One of the more disappointing games in the Bill Self era. Sure, there has been worse, esp in the NCAA but blowing a 17 pt lead because we couldn't stop Niang in the championship game?

I don't get it esp. since we've played 3 times.

I wouldn't be surprised if Notre Dame passes us w/ an ACC Tourney Championship. They beat Duke twice this year.

Not a chance Notre Dame jumps KU. Their non conference SOS is sub 300.

You do realize that they use more than one measure for seeding the brackets right?

Going 8-2 in their final 10 games with wins at Louisville then Duke and UNC might influence the committee. We went 6-4 with a bad loss at KState.

It was well publicized and I have no doubt Coach Self emphasized that ISU's last several wins have been double-digit come-from-behind efforts. It saddens me to see KU wilt that a good team makes a predictable run on their lead. KU has every bit the talent of ISU but maybe not the confidence, for whatever reason. Props to ISU for winning a tough game, but shame on KU for not taking the game as a 'Must Win".

I respect Iowa States team and coach, but they have one of the worst fan bases I have ever been around. Before today I had not had the misfortune to watch a game against ISU in person outside of the field house. Maybe the section I was in was just unfortunate, but every fan in that section was incredibly obnoxious. No class whatsoever. Constantly booing the refs and our players and calling our team every name they could think of and showing no humility after the win. I will have a hard time not rooting for them to lose any game I see them in.

I think we at ISU can get along fine without you in our corner.

Makes me sick to see my team wilt when the opposing good team makes a run. I don't expect to win every game, but I expect 'fight'. Tonight playing together and tightening up defense would have gone a long way. Niang is going to 'get his', but we have ways to make plays. Very disappointed with late effort. Not worried about the outcome.

Great game from Wayne! Not sure why he didn't have the ball more at the end before fouling out? Graham sure didn't need to be the trying to create! I'm tired of the silly turnovers, especially up at the top of the key.

On a better note, congrats to Jarod Haase for getting his team into the Dance. Best wishes to you Jarod. ROCK CHALK!!!!!

Man - sure wish Greene wasn't such a liability on the defensive end - I mean, is his three pointers really worth the sacrifice? I know he's gonna knock 'em down eventually (most likely during the exhibition games next year), but when he's this cold, putting him into the game really hurts us defensively. I'm not trying to "show off" (I'm a referee for city league) but while Brennan was in the game he gave up 8 points (defensively) and didn't hit any threes. In my opinion the defense outweighs the offense, especially when he's on a cold streak like he is now.

When he was knocking them down consistently it was a little easier to look past his defense. I actually thought his defense was looking better at that time. Now, I don't see the payoff of having him in there. That turnover when he drove the baseline and tried to pass to Frank at the top of the key was huge! SO frustrating!

I was screaming for KU to go to a zone as ISU was making more and more layups. Once we did, we actually got stops. But of course no sooner than we get a break on Selden's 3 pt play to tie the game, than we immediately give up three offensive rebounds before fouling and giving the lead back. Then we missed another layup and then tried to force it underneath to someone with three people around them, and that was pretty much that.

Making layups appears to be no problem for everyone, except us. This has been an issue more than just this year. I just don't understand why this is such a problem year after year. Seems like we miss at least five or six , if not more, every game, win or lose. This was not the sole reason we lost tonight, but combined with all the easy ones they made, and it was a huge factor.

No clue what to expect going forward. If they play like they did last night and the first half today, they can win some games. Play like they did in the 2nd half tonight or a few others they let get away, and it could end any time.

I am "all in", but I must say this is the most frustrating team I have watched in recent memory, and I've been a dedicated fan since 1968. Trying to keep my blood pressure in check and not rip out my hair.

Does Kansas have any sort of Offensive game plan. This entire year all I have seen is the dribble around the horn at the top of the circle and nobody, and I mean nobody breaking for the basket. It has to be the most poorly coached offense in the history of Kansas Basketball. Oh and let's not press the inbounds, heavens, we would probably change the entire game and maybe get the game into the 80's instead of the 60's, points that is. Very sad, and it's not the guys, it's the coaching. Just unbelievable. Someone has to get a clue if we are to continue.

I put this loss squarely on Latillia Alexander.

Sometimes it's just hard to wait for the big bucks to show up.....or maybe greed has something to do with it...

Don, you are correct, but, my biggest complaint this year, is that we never press the inbounds pass, until it's too late, and somewhere down the line, we should see our team execute some sort of offensive play that looks like it was designed. What we have been watching is one guy dribbling the ball, while 4 other guys stand around and watch and wait to see what happens. I think that aspect is a coaching failure. Otherwise, the opposing teams are just way to good on defense, and we just can't match up...