“Looking back now I wish I wouldn’t have played Wayne,” KU coach Bill Self said after the Jayhawks’ 75-73 road loss. “He was not effective and couldn’t move very well. Of course we only had seven guys. I thought all our guys tried real hard.

“I don’t think it’s any worse (for playing in game),” Self added. 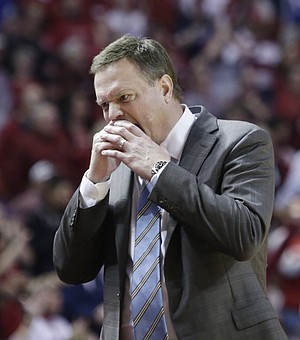 Images from Saturday's game against Oklahoma in Norman.

KU coach Bill Self: Proud of effort, disappointed in execution

KU coach Bill Self said he was proud of his team's effort but disappointed in its execution following Saturday's 75-73 loss at Oklahoma.

Selden sprained his ankle in the second half of KU’s overtime win over West Virginia on Tuesday.

“I decided the second half we’d start him and then if he didn’t do anything I’d sit him the rest of the game (he played five minutes the final half). I would have done that but we put him in at the end in case he was open he’d have a better chance to make a three than Landen (Lucas). That’s the reason he came in late. He’s a tough kid. He’ll be fine.”

Big game: Self stressed that Saturday’s game meant a lot despite the fact KU had already won the league.

“To me it does something,” the native Oklahoman said. “I’ve got a lot of family around. I didn’t exactly grow up loving the Sooners (as Oklahoma State player). I think it’s a big game.” 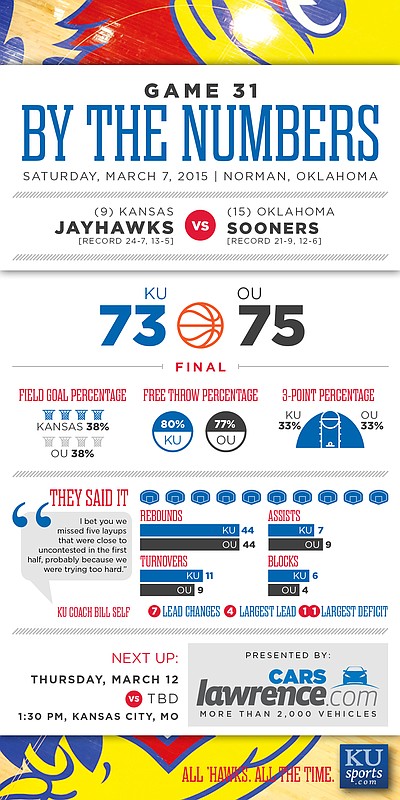 By the Numbers: Oklahoma beats Kansas, 75-73