Kansas to face K-State-TCU winner on Thursday in K.C.

Kansas guard Devonte Graham (4) gets in for a bucket against Kansas State during the second half on Saturday, Jan. 31, 2015 at Allen Fieldhouse.

After finishing the regular season with a buzzer-beater road loss at Oklahoma on Saturday, Kansas University’s men’s basketball team has five days to prepare for the Big 12 Tournament in Kansas City, Missouri.

The undisputed league champions, the Jayhawks (24-7 overall, 13-5 Big 12) will have to wait until Wednesday evening to find out who they will play in the tournament quarterfinals. 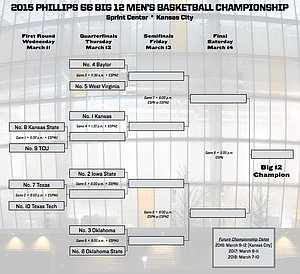 K-State defeated the Horned Frogs at home and lost to them on the road this season.

The Jayhawks swept TCU, and split two games with the Wildcats — winning at Allen Fieldhouse and losing at Bramlage Coliseum.

The Nos. 2 and 3 seeds remained undetermined until Saturday night, and Iowa State secured the second overall spot by coming back to beat TCU on the road in the Cyclones’ finale. That pushed OU to No. 3.

Can someone at J-W staff or other help out with these tiebreakers for Big 12 seeding? According to the conference website when breaking ties, the next tiebreaker after head to head involves going down the standings to see which team has an advantage over the other.

Regarding Iowa St & Oklahoma, they split their two games, both split with KU, but I see OU split with Baylor and Iowa St lost twice to Baylor. Yet Iowa St got the 2 seed and OU the 3.

Am I missing a step? Answers?

Baylor and West Virginia tied for the next spot. OU split with each, so they're 2-2. ISU lost twice to Baylor but beat WVU twice, so also 2-2. Next spot down is tie between TX, OSU and K-St. OU was 4-2 aggregate against those teams, ISU was 5-1.

Thanks for that info. Went back in to the site, and I sort of see that now. Seems a little backwards though. Would seem to me like you would break all the ties first, where possible, before using the one where you go down the standings and compare results. Doesn't really affect us, as we can't play either of these teams until the finals. Hopefully we get that far! Will be a competitive tourney.

I'm hoping we play KState and teach the kitties a lesson.

I concur. I'd love a rematch with the Mildcats.

I want K-State in the quarter finals. I also think Baylor is going to beat WVU again. So here is how I see this going.

Toughest Big 12 tourney to predict since the league began. So many of those games can go either way. It's going to be an entertaining tourney. Whoever does win it will have earned it.

You would feel all that confident predicting the winner even if they are the higher seeds in this year's Big 12 tourney? For example, OU can beat ISU and if OU plays a first half like they did at Ames in KC, ISU won't have the Hilton Magic. KU lost to K-State too. There are no guarantees. It's a tough tourney to predict. I didn't even look at the seeds to make those predictions. But... whatever.

I assumed that you hadn't looked at the seeds. I actually agree with your picks. Ignoring the seeds, we know enough about this league to know which teams are better. I was just making light of the fact that you picked the higher seed to win each game in each round. Likely there will be upsets, but we know which teams SHOULD win, and they happen to have lined up right down the bracket.

Certain teams pose certain matchup problems for other teams in the league, for example, if KU were facing off with WVU, then I know that nearly half of the populus would pick WVU to win. Niether you or I would because we believe that Kansas is better than what they have played against WVU in the two previous games. If KU faces OU or ISU, then KU also will likely be only slightly favored (if at all) to win the game.

ISU scares me more than any other team in the league because of their ability to shoot the lights out like they did in the second half against OU. But it's not farfetched that they could lose to UT in the quarterfinals, however, it would be foolish to predict that based of past results.

I really want to play k-state Thursday. One would think we would be very fired up to kick the purple SH*T out of them after what happened a few weeks ago.

the high seed doesn't want a late night before the semi-final. Gives players time to get treatments for injuries and get to bed early.

Theoretically its the least exciting game since the higher seed should win...so them move the games paring closer seeds to the prime time spots...I guess...been that way for years with KU playing early in the opening round of the XII tourney.

Or the crowd (from Baylor or WV fans at least.