Column: Fearless Frank Mason delivers when Jayhawks need it most

Kansas guard Frank Mason III (0) lifts his jersey to the crowd at the end of overtime and Jayhawks' 76-69 win over the West Virginia Mountaineers on Tuesday, March 4, 2015 at Allen Fieldhouse.

Juwan Staten and Gary Browne watched from the bench, too injured to play for West Virginia. Cliff Alexander, sitting in NCAA limbo and at the end of the Kansas bench, couldn’t help. Perry Ellis played 17 minutes, until he injured his knee and headed into the locker room. When Ellis returned to the bench late in the game, he, like Alexander, was wearing sweats.

The young West Virginia players weren’t worried about who wasn’t playing when they stormed to a 18-point lead by dominating the boards.

And the remaining Kansas players didn’t have their minds on the guys wearing sweats. 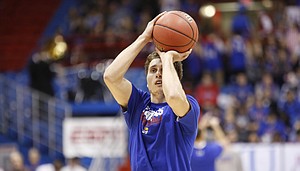 Images from Tuesday's game between the Jayhawks and Mountaineers at Allen Fieldhouse.

Kansas basketball coach Bill Self discusses the highs and lows of a long night that included an 18-point comeback, overtime and an outright Big 12 championship.

Players from both sides competed with such vigor that easy buckets were tough to come by, so it’s no surprise then that the toughest guy in a Kansas uniform, Fearless Frank Mason, didn’t let his team lose. Not much of a factor in the first half, Mason delivered the outright Big 12 title by lowering his shoulder, driving hard, keeping his defender off of him with a forearm here, an elbow there, and contorted his body when necessary to finish often against much taller defenders.

Mason scored all but five of his 19 points after halftime and carried the Jayhawks to a 76-69 overtime victory. In 42 minutes, Mason skied for seven defensive rebounds, dished three assists, turned it over once and had three steals. Mason made 11 of 12 free throws overall, including all seven in the second half.

The way Mason kept willing himself to the hoop, whittling away at the deficit, was reminiscent of Tyshawn Taylor bringing KU back from a 19-point deficit to victory in the last of the Border War games in Allen Fieldhouse.

Asked about bringing his team back from eight points down with 2:24 left in regulation, Mason referenced another great Kansas comeback.

“Years ago, the 2008 team was down nine with two minutes left and they kept fighting,” he said. “Just keep believing. Know it’s possible.”

Even on a night Kansas missed all 15 three-point shots and was outrebounded, 46-34, it was possible. KU made 18 more free throws than West Virginia and attempted 15 more than the Mountaineers, a disparity not lost on coach Bob Huggins, who was in the ear of one particular referee all night. Huggins also bemoaned his team’s inability to make shots and praised Kansas for doing a better job of driving to the hoop than his team, which too often settled for jumpers.

Playing the sort of rugged defense that hasn’t always been there this season, Kansas limited the visitors to 19 second-half points.

The rough-and-tumble style of basketball also brought out the best in Jamari Traylor (14 points, nine rebounds).

The dramatic nature of the comeback took the players’ minds temporarily off the rough news of the night, the sprained knee that Perry Ellis suffered. The star junior from Wichita’s status put worried looks on the faces of his father, mother and sister sitting in the family section several rows up behind the visiting bench.

“We’re very worried about Perry,” Mason said. “He’s a huge part of our team. We’re going to need him going forward in March.”

He was not needed Tuesday night, thanks to Mason.

Kansas was down 11 with 10 minutes left, when Mason continued the comeback by hitting a pair of free throws. He scored four points in the final 47 seconds of regulation on a pair of relentless drives.

“I felt like couldn’t nobody stay in front of me,” Mason said. “I felt like every time I had the ball in my hands I could make something positive happen.”

After West Virginia pulled with two points with 1:34 left in overtime, Mason outscored the Mountaineers, 8-3, the rest of the way and made all six of his shots at the free-throw line during that stretch.

“We did a great job of fighting back and we got to cut down the nets at home,” Mason said. “That was our goal.”

Kansas already had clinched a share of its 11th consecutive Big 12 title the night before when Iowa State climbed out of an even bigger hole at home against Oklahoma. Easy outs are nearly impossible to find in the Big 12, which makes it not only one of the top two or three leagues in the nation, but the most entertaining.

Next week’s Big 12 tournament in Sprint Center promises to deliver drama from wire to wire. 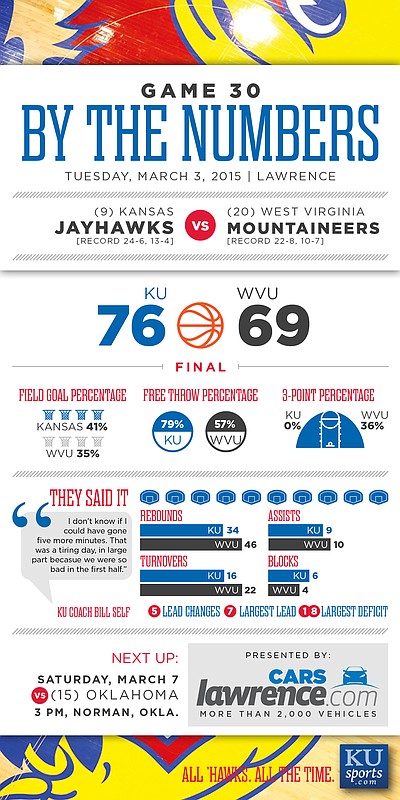 By the Numbers: Kansas beats West Virginia, 76-69, in overtime

I think they we will play a little more loose the rest of the season. They won the Big 12 championship and remained undefeated at home. I think this young team was putting to much pressure on themselves to keep both streaks going and really played tight the last 4-5 games of the season. May not be the most talented team this year but they do have lots of toughness and heart to come back and win that game last night. It appeared that Seldon and Greene were really rushing their 3 point shots & therefore haven't made any the past few games. We as Kansas Fans expect greatness from all teams and they have accomplished this in the regular season! RCJH!!!

I hope he studies sherron tapes because he is the sherron we always wish we had. If we could have a guard like him every year i don't know, it may just get boring like kentucky.

I hope we regain our free-wheeling spirit toward threes. Something has happened the past 4-5 games where shooting threes has become a chore rather than a joy. Let it fly - we will need to get this mojo back to do anything from here on. Rock Chalk!

He's been pretty good considering when KU signed Mason there were mostly negative comments on here like "waste of a scholarship"...

Funny how that works...maybe all this emphasis on recruiting isn't what it's cracked up to be.

Spot on Michael. " He is out of control, leaves his feet with no where to go with the ball, doesn't know how to distribute the ball, takes it too deep in the paint and gets everything swatted. Frankamp or Graham ought to start". Some of the criticism was valid. What people forget is that Frank was a 2 or scoring guard through out his career before coming to KU and learning to play the point. Last year and to a lessor extend this year, sometimes that scorer's mentality reappears and he will force a drive to the rim because previously during his career he has been the one counted on to finish and score. His line last night was incredible. He had to be exhausted as he was the primary ball handler asked to bring it up against intense full court pressure for 42 minutes. He had 1 turnover. He never gets his dribble picked by his defender. When the offense goes stagnant, which has happened too often this year, he has to create off the bounce and not surprisingly on occasion forces it, which happens to anyone who has the nads to try to make a play. It is significantly easier to not turn it over when you are not trying to initiate anything and just swinging the ball around the perimeter. To make a play you have to venture out and leave your comfort zone. Frank does not hesitate when the situation dictates. He is a warrior with a pit bull tenacity. A frequent criticism of HCBS by some fans recently has been his inability to sign a good, solid point guard. With Frank having two more years and Davonte three more[2 huge free throws with 11 seconds in regulation] it is reassuring to recognize the stability of our backcourt play. Lastly Jamari played his best game of the season, if not his career.

I don't have anything specific, but it seems like Frank has made a few nonchalant passes to the wings that have been picked off. But other than that, for me he is everything I might want for his position.

I also like his body language. Yes he scowls when he's mad at himself, but after a mistake, he typically stands up straight, makes eye contact with Self, and moves on.

One of the top two or three leagues? It's clearly the top conference in the country, bar none.

Frankie Knuckles! If you mess with him you better put him down because he will keep coming back time and time again.

Amen, Mick. Nothing further needs to be said!

Well, the teams are very much 'equal' from top to bottom

Whether it is the best league should be be determined after the NCAA. There are a lot of 3 pt teams in the country, we don't use ours, Whether we can guard them, and trade 2 pt goals for their 3 pt goals has yet to be determined,

I just couldn't watch the 2nd half last night until they got into overtime. My "true to her school" wife went in and put on her KU sweatshirt and sat alone in the living room cheering loudly whenever possible so I could hear it in the other room. I finally came in as a "fair weather fanatic" to watch overtime. What a mess I am this time of the year. My mental health begins to deteriorate during March. Not good since I AM a mental health professional. Cliff ineligible, Perry hurt. Inconsistency. Lack of height. Dribbling ball of their feet. Fumbling out of bounds. On and on. But one thing you can say about this bunch, they are gritty as hell. Wow! Going to be an emotionally rough month for me in a fetal position in the other room while my wife stays true to her school.

Anyone think Mason looks like one of those cartoon characters from Jib Jab in this photo?

He IS a cartoon character from JibJab but my wife thinks he is cute. Something about his eyes or so she says.

14 points, 9 rebounds, 2 steals, and no one is talking about Traylor's 2nd half effort? Busted his butt in place of an injured Ellis. Heck, he even drove to the basket to his left and scored, which I am sure surprised everyone.