The Jayhawks left Lawrence around 6:15 a.m. on Sunday, flying from Kansas City to Detroit. Following a several-hour layover, they left Detroit and the states for the 13-hour flight to Seoul, South Korea. 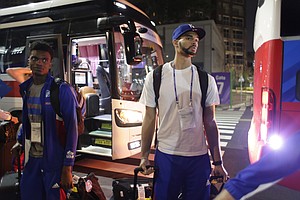 After arriving in Seoul at 6 p.m. Monday, local time, the Jayhawks waited a few hours before taking a bus to the athletes village in Gwangju. Four hours and one pit stop later, they arrived at the village's high-rise apartments at 12:50 a.m. Tuesday.

“It’s been a long day,” KU coach Bill Self said. “I guess we pulled out at 6:15 and we got to Gwangju now, so it’s 11 o’clock (Central time). A 28-hour travel day. But it was fine. The flight from Detroit to Seoul was first-class. Nothing to complain about.”

Sitting in first-class for the flight to Seoul, the Jayhawks sat in lay-flat beds with individual TVs and full entertainment options.

“It was real nice,” said sophomore Devonté Graham, who is unable to play while he recovers from a partially torn quad tendon. “I’m glad they gave us those chairs. We got to lay out. They had the TVs right there. We could play games on it and everything.”

The Jayhawks arrive in Gwangju by KUsports.com

Graham watched the movies “Taken,” “Let’s Be Cops,” and “Focus” while playing Pac-Man around a few hours of sleep.

“It was long, you know,” Graham said. “The flight went pretty well. It didn’t seem that long. We slept, watched some movies, got there. I’m just happy to be here — tired.”

After their flight, the Jayhawks were expecting to take the Korea Train Express to Gwangju, but switched to a large bus because of scheduling issues.

“We didn’t anticipate that,” Self said. “We thought we were catching a train, which would have been nice, one of those speed trains. But we had a four-hour bus ride after we landed and then had to wait a couple of hours and get organized on the bus ride because there’s so many teams coming at the same time. But it seems to be pretty organized.” 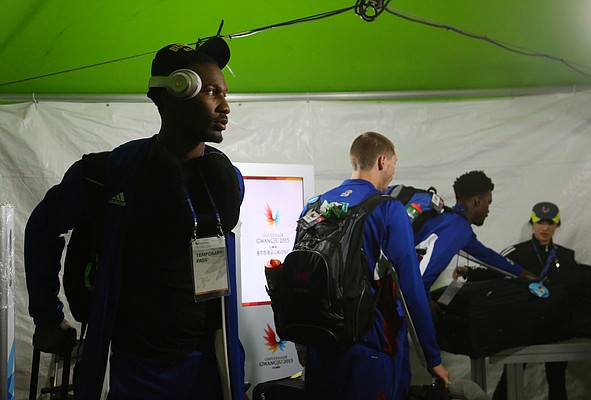 Kansas guard Wayne Selden Jr., left, and others go through a security entrance to the Athletes Village in Gwangju, Korea, after the Jayhawks arrived a little after midnight Tuesday, June 30. The team will practice later Tuesday at a local high school. The Team USA Jayhawks will play an exhibition game against China here Thursday July 2. by Mike Yoder

The team will now settle in for the next few weeks, but the Jayhawks weren't thinking too much about their new home after the 28-hour journey.

“Not yet, I don’t think it’s sunk in yet,” said Graham, a Raleigh, North Carolina native. “Maybe tomorrow once we get a little nice sleep, and wake up and we realize that we’re in a different country. But for right now, because we’ve been around the USA soccer team and stuff, it still feels like we’re in the U.S.”

Later this week, KU will scrimmage against China on Thursday at 5 p.m. (3 a.m. CDT) before facing Turkey in its first game at noon on Saturday (10 p.m. Friday CDT) at DongKang College Gymnasium. Friday's game will be broadcast in the United States on ESPNU.

I have to say it...I'm not feeling Perry's beard.

Pretty sure that Perry would want you to.

Every Kansas Basketball fan can't help to reflect upon the great pride Naismith and Allen must feel with their Kansas team, traveling half way around the world, representing the USA, in the game they invented and nutured/developed, respectively. I hope our boys reflect upon the awesome responsibility they carry reprinting not only the USA but also the cradle of basketball civilization.

I'm 5'8" and I hate flying in coach to Asia, I couldn't image Perry Ellis in a coach seat.

This is great event for KU and I hope the other teams appreciate the impact of KU on basketball. We are all the basketball children of James Naismith.

just glad the guys made it safe. long trip, really long trip. now hopefully they can get some much needed rest. get themselves ready, and in the right frame, hope they represent with pride and I know they will. again win or lose I feel this experience can be nothing but positive as long as we come out with any injuries, enjoy the experience, and he gained experience will be invaluable for all, the practice time, the game time. wishing the jayhawks the best. ROCK CHALK ALL DAY LONG BABY

please go back to your Nintendo game.

Be safe and have fun guys. Should be one hell of a ride.