Kansas guard Frank Mason III (0) is fouled on the way to the bucket by Team Canada guard Mamadou Gueye during the third quarter of Friday's World University Games exhibition at Sprint Center.

Kansas City, Mo. — Under international and NBA rules, teams have 24 seconds from the time they gain possession of the ball to the time a shot must go up.

To put that in perspective, it took Kansas University basketball coach Bill Self 24 seconds to answer a question after the first exhibition vs. Canada about playing under international rules: “You know what, I thought we actually did pretty good with that. The eight-second call across halfcourt. That really wasn’t Frank (Mason), that was as much Nic (Moore) not getting rid of it. But we’ll do better at that. We haven’t scrimmaged. We haven’t had any officials yet. I told them before the game basically the rule differences on some things.”

So in the time it took him to convey that message Tuesday night, players must throw the outlet pass, bring the ball up the court, get into the offense immediately and make sure that if no shots open up, the ball is in the hands of Frank Mason with four seconds remaining on the clock.

Kansas has been working hard in practice and in the exhibitions at doing everything faster to avoid hearing the shot-clock buzzer and the coach’s disapproving voice. 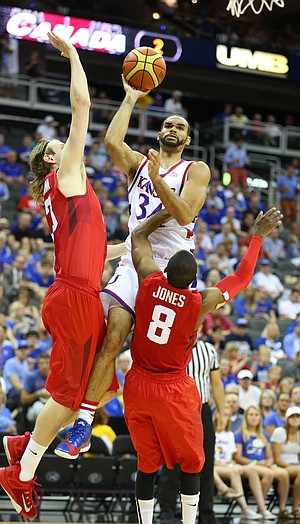 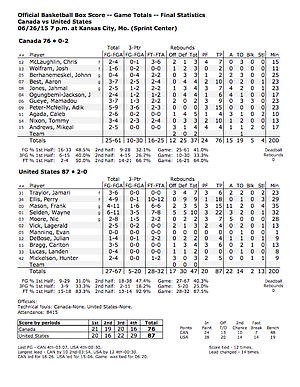 By the time the NCAA season arrives, KU will be more prepared than most to make the transition from the 35-second clock to the new, 30-second deadline.

Even without the extra time preparing to play faster, the clock reduction plays to KU’s advantage. The Jayhawks have faster athletes, big and small, than most. In Mason, they have a guard who knows how to free himself for last-second shots. Plus, the obvious: A game with more possessions decreases the chances of an upset.

If, as expected, the Jayhawks (plus two) struggle to win at the World University Games in Korea, a shorter clock won’t be to blame. The absence of their top three-point shooters — Brannen Greene (recovering from hip surgery), Sviatoslav Mykhailiuk of Ukraine (not eligible to represent USA) and Devonté Graham (quadriceps injury) — and their likely starting center Cheick Diallo of Mali (not eligible to represent USA) will have a greater impact.

Keegan, I think this article is a shade presumptuous. The International players have been playing with the 24 second clock for years. Some of those teams will be like KU having players that have been together more than a while and will be way more prepared than Team Canada which has really only been together for about a week. International players don't have to adapt to the different rules at all, KU does! Team Canada played within 10 pts of KU and was ahead by 10 at one point and they had only been palying together for a week. just wait until they practice another 2 weeks and have a few more games under their belt.

The biggest advantage KU has is that we recruit some of the best players in the entire U.S. as opposed to where some of these countries are hardly bigger than Kansas City, have fewere players to choose from, and don't really offer much opportunity when growing up to play basketball so they get started playing later in life. Most of KU's team has been playing since they were in elementary school and half of them have been playing together for the past two years against fairly high level competition in the Big XII and NCAA not to mention the conditioning that HCBS requires to being close to being the best year in and year out.

Without knowing the teams, I do think and hope we will come close to winning the championship. But, it wasn't too long ago that KU went to Europe in the summer a lost a few games. We could very well do that again. So I am expecting that KU-USA will be challenged in the WUG by those teams that are larger, well conditioned, and have players that demonstrate greater skills and we better not go over there with big heads. RCJHGKU!