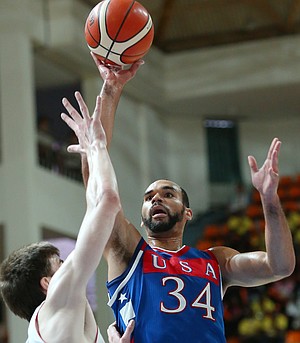 Mason’s late-game heroics versus the Germans helped KU return home with gold medals. The point guard hit two free throws in the final 30 seconds of the fourth quarter against Germany, as well as a layup in the final seconds of the first overtime that kept the U.S. alive. In the second OT, Mason found Selden for a three-pointer that pushed Team USA ahead for good in an 84-77 marathon.

Selden scored 154 points at the World University Games, tying him for third-most in U.S. history at the event, with Maryland’s Juan Dixon (2001). He led KU in scoring in four of the eight games, including his 22-point showing in the final, and hit 18 three-pointers. Selden also tied Ellis for the team lead in rebounds a game, at 6.5.

Ellis finished 10th in scoring at the Games, averaging 13.3 points, and posted a double-double (19 points and 10 rebounds) against Germany.

The Jayhawks helped the USA win gold at the World University games for the first time since 2005 and the 14th time overall.

I was having a pretty good day until I read the name Juan Dixon.

If the WUGs catapulted Dixon and the Terps to being national champs, then maybe it can do the same for Selden and the Hawks. Maybe we can even knock out Turgs Terps in the FF

Hey low key I love Juan Dixon when he was at Maryland. Dude was a problem while play there. I was just disappoint he didn't make it in the league.

Well-deserved honors for all three guys. I'm glad that the committee didn't overlook Frank for the 1st team.

Just so know, Perry shot 36% from the field for the tournament. He missed 72 shots, 61 of those 2 point shots (by a post player no less), far and away the most misses of any starter and any player on our team. He took 20% of all our shots, 24% of all our two point shots. Moore was not good either but took 52% less shots Perry did playing more minutes.

Perry played an avg. of 8 mins a game less than Wayne but took as many shots, of which as above he missed. Wayne was 33% more efficent than Perry, it was not even close.

We won despite Perrys performance not because of it.

If they want to put him on the 2nd team cause he averaged 13.3 points by taking 25-50% more shots to get those points ok, but lets not pat an effort like that on the back as well deserved.

Always count on Rodney to spew venom in the direction of any starter, much less captain whose stats come out mediocre.

We all remember nights when Perry let some misses put him in the dumps. Most of us also remember his recoveries in leading Jayhawks many other times.
Perry is a player whose impact allows everyone on his team to play better when he is on the floor. Every opponent plays worse with Ellis lurking in the back of his mind.

​John it will never cease to amaze me of the depth of the blindness that our fans have with regards to some players. Our coach does not have those blinders on, it is evident to others who watch our team and to those who watch with an objective view of our performance.

To have a senior captain play so inconsistently and to let it pass, again, just shows how unattached some of you folks are.

To say I am throwing cold water on a great experience because I recount the facts from the official score sheet just goes to show how inept you are at understanding Perry's average to poor play especially when it is so evident. Trust me Perry does not throw fear into any of our opponents hearts. Why should he? You want to defend him put a tall player on him or give him a dunk. He can't make those shots. He will keep taking them no matter how poorly he is playing, but he can't make those shots. We were able to get leads and stop runs with him off the floor John, your point does not wash. Come on, wake up.

Put me down if you want, just don't give Ellis a pass cause he is a nice guy. I like him too, I just wish he played like those few games before his injury instead of like he has played most of his career here. What is wrong with wanting the best out of a player or your team?

Can you honestly say, with that stat sheet performance, that Perry was one of our best guys on the floor in Korea? Shooting 36% missing the most shots of anyone by far playing 3/4 of the game? Come back to the real world John. I know it can be unforgiving but that is the way it is. Look at Selfs comments during their time there. He praised as much as questioned his performance. Stop pedaling and watch the games and do a little research.​

Deep down, with the game on the line, do you want Ellis making a play to win the game or someone else on the floor. Deep down John. That's what I thought. Someone else.

If not Perry taking the shots then who because we have seen what happens when he is not aggressive and unsure of himself. There will be good night as well bad ones shooting the ball but its a part of the game

Really happy for the recognition Mason, Selden and Ellis received for a job well done.

However, I'm a bit disappointed we did not get a big man amongst the top players. I suppose if the Mickelson/Lucas stats were rolled up into a single player, that guy would get on one of the list.

Perry worked every bit as hard as anyone else, and he did exactly what Bill Self asked of him to do. He executed the game plan and attacked the opposing bigs. Unfortunately he missed a lot of shots. He also created a lot of our offensive rebound and put-back opportunities.

I won't fault Perry for doing everything that Bill Self asked of him. Hopefully his shooting percentage improves.

They will improve. Perry is fine. He will make as well as miss some shot but as long as the aggression and hustle and effort is high we will be fine

i am concerned with the lack of good post play. that's supposed to be the bread and butter in the Self HI/LO offense. I also know that HCBS is very stubborn in his ways and wont necessarily just trust the guards and let them make plays as all the articles on this site since the WUGs would lead you to believe....I hope Diallo is a quick learner ala Joel Embiid & will be able to make starter contributions by conference play...I was happy with Hunter but he is not a low post, back to the basket scoring threat.

I agree, Diallo's progress will be a major deciding factor in the success of this year's team. I'm hoping they invest in him early and get him opportunities despite the crowded frontcourt rotation.

In defense of Rodney, his comments don't strike me as "spewing venom". He simply stated some statistical facts.

We all know that Perry Ellis is a great player and even a greater human being. He is definitely one we hope to count on the most.

He didn't have a particularly stellar tournament, but his leadership and attitude was always there. The primary honors go to Wayne Selden and Frank Mason, and deservedly so.

Harlan, you're new here, stick around and you'll see why someone might describe Rodney's style as "spewing venom". Stick up for him if you must, but trust me, he does not want you too, nor does he need it. He enjoys being the villain and tailors most of his posts to achieve that notoriety. He'll find facts to substantiate his negativity (which is fine), but he routinely ignores the facts that might debunk his asinine statements. Such as, if Perry is so horrible, how did he make 1st team all-conf last season? If Perry is so horrible, why does Bill Self constantly say that in order for this team to be successful, Perry has to be aggressive and shoot more? I, for one, cuss Perry out every game for his softness and his complete inability to utilize the shot fake, but to ignore his obvious talents and strengths to this team, would be foolish.

You must not be reading very carefully. I've been posting here for over a year or two.

I've followed your feud with Rodney for a long time, and it gets boring. Why is it that you are the only one who has such an ongoing battle with him? Maybe you need to examine yourself to see what your contributions to this situation are.

I've disagreed plenty with Rodney in the past. However, I try not to make it personal, although I am sure that there have been a few times when I have slipped. Nothing compared to you however.

Interestingly enough, most of the times I have disagreed with Rodney have been instances when I have agreed with you. Perhaps that was an error on my part.