Kansas guard Lagerald Vick (2) drives to the basket in a Team USA game against Switzerland Thursday, July 9, at the World University Games in South Korea.

Gwangju, South Korea — With the starters off of the court, Kansas University freshman guard Lagerald Vick made the most of his minutes in USA’s 96-57 victory against Switzerland on Thursday at DongKang College Gymnasium.

Vick drove into the paint, hit a three-pointer and went hard after rebounds. He finished with 11 points in 15 minutes, adding seven rebounds and an assist.

“He’s definitely got a big upside,” said Florida Gulf Coast senior Julian DeBose, who had 18 points in Thursday’s win. “Just being a senior and looking at him as a freshman, he’s got a big upside. He’s got a quick first step. He makes good plays. He’s just a freshman. He’s got so many things to work, though. But he’ll be great.”

In the first four games of the World University Games, Vick averaged 4.3 points and 2.0 rebounds per game.

“Lagerald can be an elite player,” Kansas coach Bill Self said. 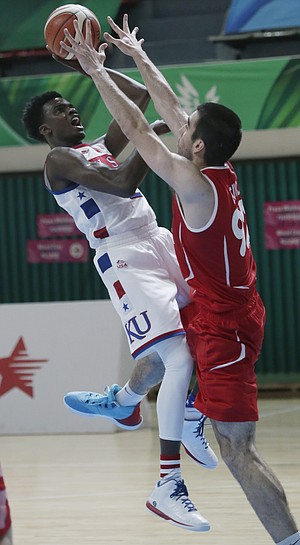 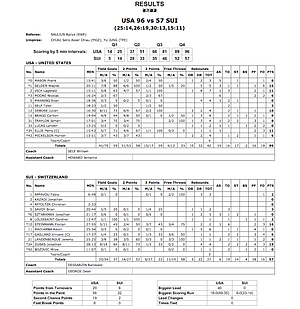 “We don’t (have) three really, really good perimeter players with us. I mean really good — Devonté (Graham), Svi (Mykhailiuk) and Brannen (Greene). It could be fun. It could be fun on the perimeter. We need a big guy to step up. … I’m excited about it. I think Lagerald has a chance. Now, there’s no guarantees, but if he can get to where he can play to his athletic ability and be able to react instead of think, which right now, he’s thinking way too much, I think he could be a terrific player.”

On Thursday, Vick scored five points in the first quarter and hit back-to-back shots in the second quarter.

“Cheick got to campus … I think it may have been like the sixth of July. I’m not sure of the date,” Self said. “But he’s on campus and he’s attending class. I can’t wait to get back and see him because if our fans find out anything about that kid is that some of the hardest playing guys that we’ve ever had, Chieck may play harder than any of them. He’s going to be a fun guy to watch. He’s got an unbelievable motor.”

The 6-foot-9 Diallo couldn’t play in the World University Games because he’s originally from Mali.

Meanwhile, Kansas forward Dwight Coleby, a transfer from Mississippi who will have to sit out next season, has not arrived on campus. He’s still dealing with paperwork after his passport was stolen when a thief broke into his car. The passport was stolen three days before Coleby was to leave for the Caribbean Basketball Confederation Championships, forcing him to miss the tournament and the chance to represent the Bahamas.

“Dwight had an unfortunate incident. He had his passport stolen with his visa in it,” Self said. “He’s been scrambling around and we’ve been trying to help him. But he’s been scrambling around getting all the proper paperwork. … It’s not like you’re coming from Florida, even though the Bahamas isn’t that much further. There’s certainly some things that you have to do in order to make sure that he’s set for a long stay once he gets back.”

Team USA players and Self talk about the 96-57 win over Switzerland by KUsports.com

This Coleby ordeal is getting a little strange. I've traveled and have arranged frazzle for people to from places that include China, Russia, Saudi Arabia and the Bahama's. It's not that difficult and is very routine with even the Russians and Chinese offering expedited services. Perhaps he just wants to stay home a bit longer. Maybe the their will mail his passport back to him and he'll announce a recovery of his passport.

...or he probably requires a student visa from the U.S. and the USG won't issue it until his Bahamian passport is reissued. In other words he's probably dealing with a lot of US and Bahamian bureaucracy. Until then, I'm sure that he's enjoying Bahamian life and conch fritters! Yeah mon!

Suzi you're also American and were only traveling. Big difference. Come on now

Suzi is reading too many poor-quality novels.

Indeed. There's a big advantage to being an American and traveling elsewhere and back, as opposed to being from another country and requiring all kinds of detailed paperwork and student visas for extended stays coming into the U.S. I had a mix up while teaching in Japan once upon a time and it took three weeks to figure out and get my visa renewed and my trip re-sorted out...

Vick has already landed a starting role on my KU "sleek greyhound" team. He joins Graham at point guard and Hunter Fisher Mickelson at Center. Two spots are still open!

Curious if others who can go back this far, think LV's body type and style of play reminds you of the one and only Milton Newton. It hit me watching last nights game. Milton was money in the 88 Final Four. Fond memories of watching him go to work on Duke and OU. RCJH

I was getting my Masters at FIU in Miami and Milton Newton was playing against Boston at the school for NBA scouts. I'm not sure what it was called back then, pretty sure it wasn't anything like today's NBA summer league. But anyways, Milton was about 5 feet away (this was before FIU even had a men's team) and I gave him a quick Rock Chalk shout out and he turned around with his great smile and shook my hand. Okay, not that big a deal but it's a memory that always brings a smile to me.

Lagerald Vick has already shown that he is the real deal. His play is where most freshmen hope to be around the time conference play begins. This guy is going to challenge the rest of the backcourt for playing time. I don't see him getting too much time at the point but he can certainly log minutes at the 2 or 3 position.

Edward isn't Frank Mason "sleek enough"? Obviously that fatty Wayne Selden will start. Bragg is somewhat sleek. Do you have a preoccupation with emaciated athletes? Not sure how to take your post.