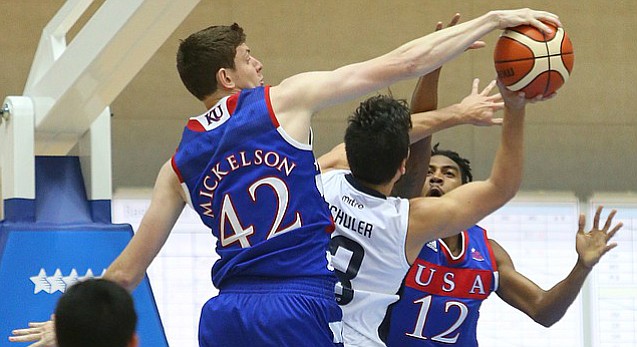 Jeollnamdo, South Korea — With a 55-point lead against Chile on Tuesday and five minutes remaining, the United States men’s basketball team still had four of its starters on the floor.

In most games, the main emphasis would be running out the clock. But the Jayhawks still had some ground to make up in their 106-41 victory over Chile at Muan Indoor Court.

If two teams are tied in the pool-play standings, the head-to-head tiebreaker will be used. If a tie involves more than two teams, the tiebreaker is point differential. The top two teams from each pool advance to the top bracket.

The Jayhawks only had a plus-18 point differential in their first two games and were far behind Serbia and Brazil.

“Unfortunately, by FIBA rules ... you don’t like playing this way, the object is to beat somebody as bad as you can in case there’s a tie,” Kansas coach Bill Self said. “We won the first games by nine, both of them, but they should have been 15, probably. This game we told our guys we had to beat them by 50, and we ended up beating them by 65.” 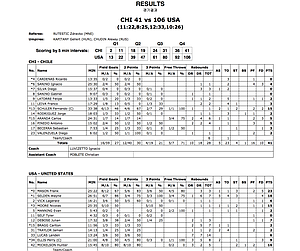 Lucas cleans up the glass

Lucas only played three minutes in Sunday’s game against Brazil and wanted to make the most of his next opportunity.

Along with a game-high 14 rebounds, Lucas scored six points on 3-of-6 shooting.

“I thought he played well,” Self said. “I didn’t think Landen played near as well the other night at all. But I thought he had a good attitude today, and I thought he got in and really went after the ball. If he just plays to who he is, he can be a really good player.”

With Lucas leading the charge to rush the offensive glass, the Jayhawks finished with 31 second-chance points.

“Yeah, it’s always a big emphasis,” Lucas said. “I saw the opportunity to get a couple. I just went after rebounds hard.”

USA switches defense in second half

At the beginning of the third quarter, the Jayhawks went to a run-and-jump defense near mid-court.

The Jayhawks pressured Chile’s guards, forcing them into 13 turnovers in the second half while holding Chile to 27 percent shooting.

“We executed it very well,” KU junior point guard Frank Mason III said. “Coach did a great job bringing it up at halftime, drawing it up, and I think our guys did a great job of executing the run and jump. Then it got us out in transition.”

“We wanted to get out and play fast defensively, and we did that,” Kansas senior forward Perry Ellis said. “It really created offense for us.”

The Jayhawks scored 59 points in the second half, pushing the pace and earning easy baskets in transition. USA finished with 29 points off turnovers and had 12 fast-break points.

“It was against a bad team, so it worked pretty good,” Self said. “But, certainly, I thought we did a pretty good job with it because we never practiced it. But we’re not going to be able to do that against real guys. Tomorrow will be a big-boy game, without question.”

The Jayhawks were led by their guards on Tuesday, but Self would like to see the forwards get more involved.

“We didn’t really throw it inside,” Self said. “That’s the thing. We struggled with it last year. We’re struggling with it right now. A lot of it’s our guards, our guards being able to throw the ball to big guys and our big guys deliver. I think we’ll get better at it, but that’s something that we’ve still got to do a better job.

“Like, Perry scored nine points today,” Self added. “He didn’t play as many minutes because he’s got a sore foot, but he scored nine points, and I think if we threw him the ball more, he could’ve had 15 so easily. So we’ve got to do a better job with that.”

Ellis had nine points on 4-of-8 shooting in 21 minutes.

“They were shooting real well, especially first half we shot real well,” Ellis said of the team's guards. “Nic (Moore) was knocking down a lot of shots in rhythm. They were good shots. That’s always a plus.”

Despite scoring a game-high 23 points on 8-of-12 shooting, Mason still feels soreness in his right wrist.

“Just a little,” he said. “It’s really the same. That last shot before the first half (ended), I fell on it again. So it’s kind of sore still.”

If I'm reading this article right, would it be a correct to conclude that if the US, Serbia and Brazil were to all finish pool play at 4-1, Serbia would likely be the team to not advance due to the PD? For that to happen, Serbia would need to beat the US then lose to Brazil, neither of which would be all that big of an upset. Seems unreal that one of the best teams in the entire tournament, with only one loss, would not make the medal round. I hate playing "run-up-the-score" games but it looks like we needed to do that v. Chile...and possibly in our last game v Switzerland.

It's hard to tell how good the Russian team is with their 3-0 record and 84 PD due to their poor pool. Nevertheless, based on historical performances, its probably safe to assume the USA, Russia, Lithuania, Serbia and Turkey are the 5 best teams in the field, three from our Pool D.

This is indeed a hard way for Coach Self and his team to play. They never run up the score but are forced to by the international rules. As the old saying goes, "we don't make the rules, we just play by them."

I don't advocate running up the score, but maybe the Hawks can carry this mental toughness into the upcoming season. Too often the past few years have Kansas team s run up large leads in the first half of games only to allow opponents to make big runs coming out of the half. KU nplayers eed to keep their foot on the gas until the opposing coach cries "Uncle" and pulls his starters. Then, and only then, should they allow themselves a mental breather. RCJH go USA!

Maybe the team should periodically watch video of the KU - UK game from 1990-ish when Roy indicated to Rick that he should stop pressing so we could stop breaking it for fast, easy baskets on our way to 150 (?). IIRC, there was a 1 fingered response, though it wasn't picked up by TV.

December 9, 1989 Pitino would not quit pressing and was destroyed...

Interesting to see that Canada is currently undefeated as well after we beat them twice (albeit in the friendly confines of the Sprint Center).