Kansas guard Wayne Selden Jr. breaks away from a defender in a Team USA 81-72 win over against Brazil Sunday, July 5, in Gwangju, South Korea.

Selden exploded for 15 of his team-high 23 points in the first half, including eight in the second quarter, lifting the Jayhawks to a 81-72 victory at the World University Games.

“Wayne’s probably played about as well in the first two games as any player in the tournament has played the first two games,” Kansas coach Bill Self said. “I haven’t seen, obviously, other guys, but he was great. Strong. Attacked the rim. Made shots. It’s always nice when Wayne gets his first couple down because it gives him confidence.” 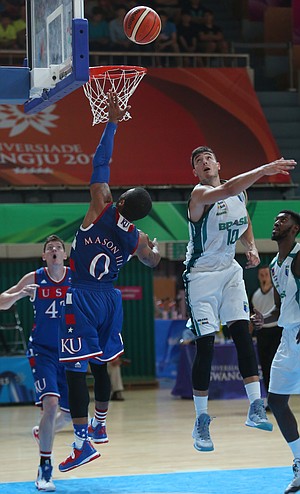 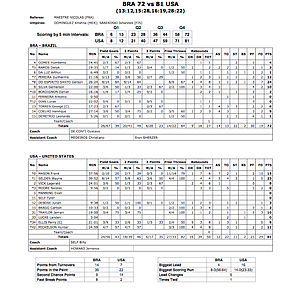 Selden, who sat for just eight seconds in the contest, added three assists, four rebounds, three steals and four turnovers. He made his first two shots and had seven points in the first quarter.

“Just playing basketball,” said Selden, who shot 8-for-14 from the floor, including 3-for-6 from three. “My teammates found me when I was open and I just knocked down shots.”

The Jayhawks struggled in the first quarter, shooting 27 percent from the field (3-of-11) with nine turnovers. Despite the problems on offense, they only trailed by one point, forcing Brazil into tough shots and cleaning up the glass. Team USA won the rebounding battle, 50-27.

“We came back into the huddle and kind of had to change our mindset a little bit, kind of refocus in,” KU senior forward Hunter Mickelson said of the difference after the first quarter. “That first quarter was a little bit shaky, just getting into things. But like I said, once we got back in the huddle, we kind of settled down, refocused, and came out better from there.”

Self added of the first quarter: “It was awful. We had 22 (turnovers) for the game. Perry didn’t have a good game. Our bigs all got off to a terrible start.”

For the second straight game, the Jayhawks defended well. Brazil shot 39 percent from the field (26-of-67), including 6 of 26 from the three-point arc.

“We’re really improving there,” Selden said. “I know we’re Team USA right now, but as Team Kansas, that’s where we struggled at last year and the year before and we’re really trying to improve that.”

Brazil pulled within eight points in the fourth quarter, cutting the margin to 64-56 with 6:30 remaining. But Selden drilled a jump shot, junior point guard Frank Mason III grabbed a steal and dished an assist in the paint to Mickelson for a layup-and-the-foul to start a decisive 9-2 run.

KU senior forward Perry Ellis sat for most of the fourth quarter with what Self said was a “tweaked ankle” and SMU senior guard Nic Moore fouled out, leading to extra minutes for Mickelson (11 points and eight rebounds in 25 minutes) and KU freshman guard Lagerald Vick (eight points and six rebounds in 24 minutes). Senior Jamari Traylor added 10 points and two rebounds in 19 minutes off of the bench.

“We’re not going to have a chance to advance very far if Nic only plays nine minutes and fouls out,” Self said. “But I thought that really our bench carried us to where I thought our starters carried us the other night.”

Mason added four points and four assists in the fourth quarter, helping the Jayhawks pull away.

“Frank did a really good job of getting into the lane,” Selden said of Mason, who had 15 points, eight rebounds and seven assists in 38 minutes. “The bigs really did a good job of spacing out. We found shooters. Lagerald made real big shots down the stretch. He played his best game as a Jayhawk so far and I’m really proud of him.”

But the Jayhawks were sparked by Selden when they had trouble finding an offensive rhythm in the first half. His eight points in the second quarter helped USA go on a 14-0 run over three minutes.

“Wayne looks healthier to me,” Self said. “He’s more bouncy. For a guy his size to play 39 minutes — that’s pretty strong — and then not be tired. His conditioning is off the charts. He’s obviously worked really hard this summer.”

The Jayhawks have an off day on Monday, but will return to the court to face Chile at 2:30 p.m. (12:30 a.m. CDT) Tuesday at Muan Indoor Gymnasium. The game will not be televised.

Replacing 5-9 with 6-11. Seems more common for it to be the other way around. Speaks to the versatility we have on the team - and how well Frank is playing.

I also seem to recall that Turkey and Brazil were supposed to be 2 of the better teams in our pool.

I was surprised to read that too, but I then read the entire para

"KU senior forward Perry Ellis sat for most of the fourth quarter with what Self said was a “tweaked ankle” and SMU senior guard Nic Moore fouled out, leading to extra minutes for Mickelson (11 points and eight rebounds in 25 minutes) and KU freshman guard Lagerald Vick",

and then realized that Micelson->Perry & Vick->Nic... that made more sense... (But the author needed to make it clearer).

Would be nice if we could be updated on the results from the rest of the pool.

Chile seems to be the team to run up the score against.

I agree, Joe. Would be nice to know a little more about those that we are up against. If Turkey and Brazil are indeed two of the better teams in our pool, then we certainly are competitive with just about anyone. However, I don't know what to expect down the road.

US and Serbia are the two best teams, Brazil, Turkey, and Switzerland are the second tier teams, and Chile is the team everyone is going to boost their point differential against.

Also, I noticed that Coach Self used the word "bouncy" to describe Wayne Selden's performance. Someone used that term the other day in one of his/her posts.

I also notice that Bobby is watching this site pretty closely. No sooner does Joe ask for information, and Bobby responds while I am writing this message. Great job!

Thanks! Glad to help.

That was me who said he looked bouncy in the game against Turkey...

I was happy to see Vick make the most of his minutes along with Mickelson. I get the feeling we won't see the real Bragg until he gets his nose fixed and gets to play without the mask. He hustles, which is good, but it is obvious the mask bothers him. Selden looks great by the way!

What is with these guys and the fact that they have terrible first quarters? O.o

The thing that impressed me was the SPEED of play.

Those rims are so tight, it looks like a superball bouncing off, and seems it harder to grab the ball when it is loose, as it is a slightly different size.

Vick really gave us some good minutes today. He's starting to look more comfortable, not looking like the game is moving too fast for him as much now. I loved that he was calling for the ball in the corner when Frank was running down the clock near the end of the game, Frank drove and dished to Vick and he knocked down the three to stop the run they were making. Probably the biggest shot of the night and Vick wanted it in his hands. That's a good sign for the future! DeBose also had some good moments, though he had a few bad turnovers as well. Overall he played better than he has in previous games though. Moore couldn't get anything to go his way so it's a good thing the guys on the bench stepped up.

I can't blame Moore for not having things go his way when he is getting knocked around like a pinball with no fouls called and then picking up fouls on dubious calls but it did allow Vick to get extra minutes which he made the most of.

No doubt that Selden was the best player on the court last night but I also noticed Vick's confidence growing as his play on both ends of the court improved from his first game performance. When you consider that normally, Vick would it be in a real game situation until sometime in November and then see him play so well in July speaks volumes to his potential.

I thought that last night's game was great for the team as other players needed to step up and did so. Having to play through injuries in this tournament will pay off in Maui and other preconference play and maybe more so in the NCAA.

I don't want to get too far ahead with expectations but I believe this Jayhawk team has a different feel (and I'm not just talking about personnel) from the last two years. We played really well last night and that was without three key players.

Nic moore proved that the international refs can be just as bad as all the rest. The intentional foul call ranks up there with the worst calls I've ever seen.

I like letting the rougher play go but the refs lacked consistency.

I expect Frank to have at least one or two triple-doubles by tourney time next year. I really believe he can be that good