Gwangju, South Korea — The United States/Kansas University men’s basketball team fought back from an 11-point deficit in the first quarter against Turkey to win its World University Games debut, 66-57, at DongKang College Gymnasium.

With strong defense in the second half, the Jayhawks pushed the pace and outscored Turkey, 34-21, in the final two quarters. KU junior guard Wayne Selden Jr. led the team with 19 points and nine rebounds, scoring 10 points in the second half.

“Our defense and getting to the boards,” Selden said of the differences between halves. “Getting stops is big for us. Us getting stops … we like to get out and run and get layups.”

Team USA had a 12-2 run to open the third quarter, taking the lead when KU junior guard Frank Mason III hit a free throw with 7:09 left in the third. The Jayhawks never trailed again, though Turkey cut the margin to four points, 61-57, with 3:48 remaining.

“We switched how we guarded the ball screens,” KU coach Bill Self said. “I was pleased with how we defended. I thought we did a pretty good job. 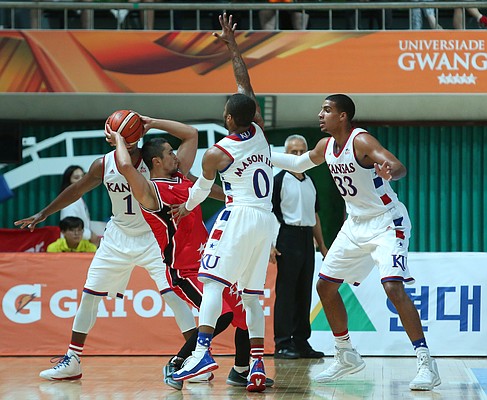 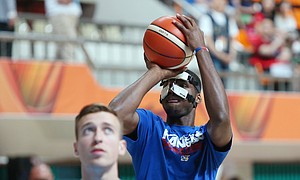 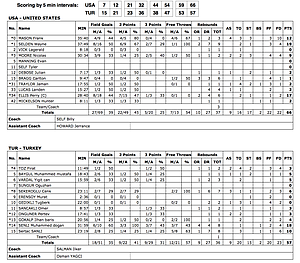 “I think that sparked us. It’s always been my understanding, if you have good players and you play well, you’re going to win. The key to having good teams is, when you don’t play well, you figure out ways to win. That’s what we kind of did today. We didn’t play well.”

In the run to begin the second half, Selden scored five points, driving to the rim for a layup and dropping a three-pointer from the wing. Turkey went 1-for-8 from the floor during the stretch with two turnovers.

“It’s just being aggressive,” said Selden, who shot 8-for-16 and made two three-pointers. “My biggest thing is trying to get to the boards. Just really running the floor and spacing out, letting Frank create, letting (SMU senior guard) Nic (Moore) create, and finding my spots.”

At the end of the third quarter, Moore scored six of his nine points and assisted on an alley-oop from beyond the three-point line to Selden.

“It was a good little run,” Moore said. “Coach said I was being passive in the first half with stuff. I was just trying to be a good teammate and get the ball moving and stuff. When he told me to get my shots up and start looking for opportunities, I took advantage of that.”

KU senior forward Perry Ellis added 17 points and six rebounds, fighting through contact in the paint. The Jayhawks outscored Turkey, 38-18, in the paint.

“They were physical guys, strong guys in the post,” said Ellis, who shot 8-for-18. “I mean, yeah, we know we’re going to have to play against that going forward. That was good experience.

“I felt pretty comfortable out there.”

After taking a 5-0 lead in the first quarter, Turkey went on a 18-2 run over three minutes. Turkish forward MD Senli scored 10 points in the stretch, while Turkey made seven straight shots.

“I think they were just ready to play at first,” Moore said. “New group of guys … we didn’t know their team and who could do what. Second half, we kind of keyed on that and we started worrying about us, playing our game.”

Self added: “We had no scouting report. Even when they warmed up, they kept their jerseys on so you had to look at their shorts to figure out what number they were. We figured out (Senli) was a good shooter after one quarter.”

But the Jayhawks responded with an 11-2 run to open the second quarter with four points from Selden, a three-pointer from Moore, a layup-and-the-foul from Ellis and a putback from KU senior Hunter Mickelson.

It was definitely an ugly game except for a few runs to start quarters but a win is a win and hopefully things will get better as scouting reports become available.

The main thing I was surprised by from a difference of play standpoint was how many fouls Turkey took in the open floor to prevent a fast break, or a layup on offense. They seemed more than willing to foul any time they could if it prevented a basket. You'd think they would get in foul trouble with this method but the officiating was loose enough the rest of the game that it appears to work. Mason go fouled one time and the guy fouling him started putting his arm in the air to say it was him that fouled him before he actually made contact with Mason (who was just dribbling to the wing).

Nice win guys! I would imagine all teams are a little rusty in their first game, and we were no exception. It looked like the other team just ran out of gas, and fortunately we took advantage when we needed to. Nationally televised Jayhawk basketball in July...just plain awesome! Happy Independence Day everyone!

Is there a box score posted on this site?

I love the toughness that you see in Bill Self teams. They don't panic. I hope that this fall, we see this type of very fast play. If they play with a 24 second mind set where they are pushing up the ball fast and are constantly attacking, this next season could be a lot of fun.

It was great to hear RCJH in Korea at the end of the game!

For folks who want a box-score, I saw one in my Twitter feed: http://t.co/Iw3HxY3dXI

Nic Moore had a bad game and Lucas is still soft. If I am Self, when the season starts I put Diallo as the starter and let Mickelson and Lucas figure out who is coming off the bench. Otherwise, Perry and Frank look ready, while Wayne is almost there. Bragg might not look comfortable during this tournament with that mask on and Vick needs to let the game come to him because he is definitely athletic.

Did you see the size of the Turkey inside players? I thought Lucas fought very well. Difference in what you are looking for I guess.

So, every time Lucas plays against a big center we can make excuses? He doesn't attack the basket. He needs to be tenacious.

Go back and look at the game buddy. I wasn't making excuses for him only saying that sometime you are simply overmatched and can happen to everyone. Still think he did some good work. Watched the last quarter and he got a couple of good rebounds which helped keep the game in hand.

I thought Nic Moore played well. Selden was the best player on the court and Ellis still won't dunk.

Agree John, the inside post players from Turkey were huge. nothing fancy about their moves, their moves consisted of backing their butts into Landen or who ever, dipping their should and just shoving Landen back ti;; they were like 2 ft from the basket. Not much a player can do with that, Landen was trying to hold his ground , but on more then one occasion was the one getting ran over like a mack truck. guess that's International ball for you.. they was fairly tall I know they had the 1 6ft 11 player others 6ft 9 and such. feel this is a good start, showing toughness and hanging in there, not east when a team hits you with an 18-2 run in the 1st quarter.Wayne looks a lot better, more aggressive, Perry looks better, we really need Cheik would be nice to help[ out, although his body makeup right now wouldn't match up well with the bulk either. BUT HEY GREAT WIN sweet way to start. ROCK CHALK ALL DAY LONG BABY

Now I'm not sure if it was our size that altered shots or Turkey just not being that good, but there were a lot of layups that were banging off the underside of the rim and even the backboard by Turkey players.

I'm also not too concerned about the score. Turkeys big were hitting 3 after 3 after 3. In the regular season, I believe, we aren't going to see a team that will pull our bigs from the basket consistently like last night.

Finally, and no offense to nick, but how much better will this team be when we have devonte, svi, and greene back? Not only are they better shooters buy are bigger. Plus think about the development Bragg, vick, and Diallo will go through through the course of the season. This season should be Bea fun one.

I loved the leadership from our core KU trio of Mason, Ellis and Selden. Nic did very well in sports but I tend to believe Graham could replicate his contributions. Watching our core and knowing five...repeat FIVE... of our key players are back in Lawrence, reinforces my belief '15-'16 will be an exceptional year.

Who is the 5th guy we're missing? I can only think of 4: graham, svi, greene and diallo. Coles by is back home but he won't be a contributor this year as he'll have to sit out.

Going to be a physically demanding tournament that will be as much about surviving the punishment as much as anything else. Turkey got tired, our youth and talent prevailed.

This was a good showing by the Jayhawks, especially Selden and Perry at times. But a few things still stood out to me: 1.) Jamari is still out of control 2.) Perry still looks too pouty at times and even mentally checked out (for example when Turkey missed a shot and the ball came right into Perry's hands and he just missed it)) 3.) Frank Mason's shooting technique looks off, he holds the ball in the palm of his hands and shoots a knuckleball

As for the freshman, I was really impressed by both Vick and Bragg. Bragg definitely needs to get more physical but he is still growing into his body. This team will be really good with Diallo, Svi, Devonte and Brannen. I hope they continue to play with a 24 second mindset like the Roy Williams teams, bc as we saw it doesn't weaken the defense to play fast.

Lastly, can Nic Moore transfer to KU bc he has great leadership skills and is very thoughtful. Kansas desperately needs smart players, not just physical talents,

So, will some one explain, again, how the shorter clock translates to more points?

It doesn't Steve if your not hitting shots. But if you are, more posessions suggests more points in games. At the end of the day you have to put the ball in the hoop for that to happen. It was fun watching Team USA (Kansas) on TV and sporting your nations colors on national TV. RCJH!!

Big man situation will be a problem again this year. Glad the guards can rebound. Last year for aggressive Perry to show up consistently.

I disagree. The addition of Bragg and Diallo will more than make up the loss of Alexander. Add veterans Lucas, Mickelson, Ellis and Traylor and I think we have a solid frontcourt.

Just like Cheick made our recruiting class rank change dramatically by being on our team, he also effects most, but not all of our big man issues from last year. (he cannot play 40 mins. a game)

When we defend, he will be a handful. Long, Athletic and tough. He comes preset to defend with energy. Much better than we have seen the last couple of years from his position. There will be lots of smiles with how he will play defense.

It is premature to look at our team in Korea and make your observation. Realistically one of the best big men on our roster is not playing but in school right now.

We will look a lot different with him roaming the baseline.