‘Unconditional’: Jayhawks have a ball at clinic

A Special Olympian had a special favor to ask of Kansas University junior basketball power forward Hunter Mickelson on Sunday afternoon at the 31st-annual Wilt Chamberlain Clinic in Allen Fieldhouse.

“Can you help me look for coach Self? I’ve got a surprise bowl I made for him in ceramics,” a young female athlete said, holding a gift for KU basketball coach Bill Self.

About 10 minutes later, after Self was located in a crowded gym, the Olympian indeed was able to present KU’s 12th-year coach a homemade gift during the autograph-signing portion of the 2 1/2-hour event.

“Thank you very much. You made that in ceramics?” Self asked the Olympian. “I took that in school, but I wasn’t very good at it. You’re obviously better than me.”

The Olympian pumped her fist and screeched, “Yes,” after completing her special delivery. 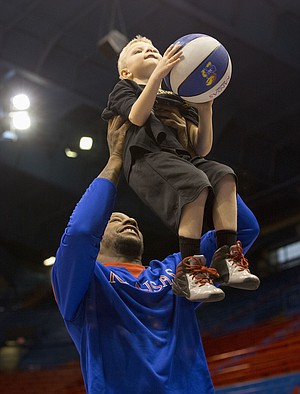 “This is one of the best days of the year for our team,” Self said, assessing the clinic held a day after the Jayhawks’ 75-62 victory over Texas in Austin. “We’ve done this after we’ve lost. We’ve done this after we’ve won. The thing is, regardless of what the outcome was the day before, it’s unconditional. The guys and gals are totally into it the same each and every year. This touches our players, and our players enjoy reaching them.”

Whether it was Jamari Traylor grabbing the microphone and doing play-by-play of the 100 Olympians’ scrimmages, or Kelly Oubre Jr. showing proper dribbling and passing technique in drills, the Jayhawks indeed had a blast on their scheduled “day off.”

“Winning on the road was really big. Of course, everybody is going to be real excited after something like that,” Mickelson said. “Coming back here and being able to do this ... what I’ve seen from everybody is that we’re all in good spirits, having a great time on a good Sunday.

“They are really sweet-hearted,” Mickelson added of the Olympians. “You can tell it means a lot to them, and they’re all out here having a good time.”

Self said the tape of the KU-Texas game indicated the Jayhawks (16-3, 5-1), “did play well. We had two turnovers in the first five minutes, and one the last 35 minutes of the game. Even though we didn’t shoot a great percentage (43.5 percent to Texas’ 40.0), if you don’t turn it over and you get 13 offensive rebounds like we did, you have opportunities over time, which is a huge key.”

Self said he did notice Wayne Selden Jr. cheering wildly on the bench in the closing seconds despite the fact the sophomore wing played just nine minutes the second half after going 18 minutes the first half.

“That was a team win. Nobody could argue the five best players played down the stretch in yesterday’s game. Kelly was good (14 minutes first half, seven second). Wayne was good. They both scored eight points. Jamari (Traylor) made some of the key plays in the game. (But) down the stretch, those five who were out there played very, very well.”

“I thought late-game we definitely needed two little guards in there since I knew they were going to pressure,” Self said of the Mason-Graham duo handling UT’s pressure.

Of the method to his distributing minutes lately, Self, who used just eight players Saturday, said: “I don’t know, I guess what I feel at the time or what the flow is.”

Svi’s doing OK: Self was asked about the frame of mind of 17-year-old Sviatoslav Mykhailiuk, who has not played in three of the last four games.

“You know, I think he’s doing OK,” Self said. “You go from starting early (six of the first eight games) and then to not playing hardly at all here the last few games. I hate that, because he’s too talented not to play, but the reality is, the guys that are playing ahead of him right now are kind of settled in and playing very well.”

“He bailed us out early,” Self said of Greene, who had two threes and eight points in seven first-half minutes vs. the Longhorns (14-5, 3-3). “He would have played more. He bumped his knee and had to come out a stretch in the second half.”

Self said the knee was “fine.” Greene also is battling headaches he has suffered since he ran into an Ellis elbow at practice last week.

Freshman forward Alexander has a bruised sternum he suffered after getting hit in the chest in practice recently.

“This is a fantastic opportunity for our athletes,” Clint Armistead, director of sports for Special Olympics Kansas, said.

“We’ve been doing this for 31 years, which is the longest relationship Special Olympics Kansas has held with any sporting organization. We value so much the opportunity for our athletes to play with these athletes, shake some hands, feel like a star, feel like somebody on a collegiate level. This is anybody’s dream to play at Allen Fieldhouse with the athletes.”

Armistead explained every team across the state wants to participate, and Special Olympics Kansas now has a lottery system and team rotation to allow groups to come to the event once every four years.

It's so easy to be a fan of Coach Self, his staff, and his players. Once more, they remind us of the important things in life.

The players and Olympians love doing this every year and I love reading about it every year. Good job guys!