For much of his coaching life, Clint Bowen has been one of the youngest guys on any coaching staff of which he has been a part.

Although the 42-year-old Bowen remains on the young side relative to most defensive coordinators in the country, the former Jayhawk who served as Kansas University’s interim head coach for the final eight games of the 2014 season actually is one of the oldest coaches on first-year head coach David Beaty’s coaching staff.

Only Beaty (44), co-defensive coordinator Kenny Perry (44), offensive coordinator Rob Likens (47) and running-backs coach Reggie Mitchell (54) are older than Bowen. In fact, the average age of Beaty’s staff, including the head coach, comes in at 38.8 years old, which makes this staff by far the youngest group of coaches that has come through Kansas in years.

Despite being one of the youngest staffs in the country, the new KU coaches do not lack experience. All but four of Beaty’s coaches — 27-year-old Klint Kubiak (4), 31-year-old Calvin Thibodeaux (7), 31-year-old Zach Yenser (8) and 31-year-old Kevin Kane (9) — have at least 14 years of coaching experience. And the average number of years in coaching per staff member sits right at 16. 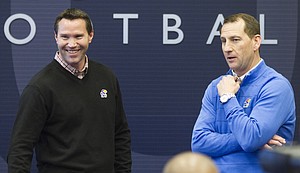 Here’s a look at the Kansas football coaching staff, with name, title, age and years of experience:

“Even though they’re young in age, they’ve earned their stripes,” Bowen said of the new staff, which is rounded out by 37-year-old special-teams coordinator Gary Hyman and 39-year-old strength coach Je’Ney Jackson. “They’ve earned their right to be here, and they’ve worked hard to get here and have accelerated their learning curve to get here. I think it’ll be a group of guys that our players on our roster right now can come in and relate to and feel comfortable around.”

When it comes to the task of turning around Kansas football, regardless of how many years they’ve lived or coached, Bowen said every member of the new staff was considered an equal.

“Any time you bring a new group of guys together, I think it’s a great opportunity to really step back and evaluate everything you do,” Bowen said. “From a recruiting standpoint, to how you handle your players on a day-to-day basis to a schematic standpoint. It’s a chance to let everyone stand up in the room as they do on their interview. It’s interesting when you interview guys. You actually learn a lot about the way they would do it. It’s a chance to reset the whole deck a little bit and find out what everyone really does know and find out where you can make your program better.”

One of the biggest areas that Beaty, Bowen and the rest of the staff hope to make a big splash is on the recruiting trail. Bowen said the energy and enthusiasm of a young staff could help entice more athletes to come join the KU program. Recruiting coordinator Mitchell, who, 32 years into his career, is the most experienced member of Beaty’s staff, said having so many guys who have worked with Beaty in the past at one place or another also could be a big advantage.

With less than three weeks remaining to fill the four open spots in the 2015 recruiting class in time for national signing day (Feb. 4), the now-complete staff has gone all-in in its attempt to find a few more guys to round out the class.

“The transition has been very smooth,” Mitchell said. “Because of coach Beaty’s personality and attitude, he knows sometimes things aren’t going to work out perfectly. With me knowing our roster a little bit and knowing the players and then knowing the guys who we were recruiting on the board, that’s kind of helping the transition.”

I guess we'll find out soon enough just how bad or good a coach Charlie was. Some of those freshman and sopomores should start getting some playing time.

Anyone know how Coach Bowen is actually taking not being named head coach? I mean outside of what he says to the media?

Every pic I see of him he's smiling. I'm sure he was/is disappointed but he is a Jayhawk through and through and he is in fact a football coach at his dream school.

Except he interviewed for a secondary coach position at Michigan within the past week.

Do you have a link with more info?

A traditional 4-3 does not work against the spread offenses that are the norm in the Big 12. A bend but don't break is what's most successful against spread offenses because there will be a lot of yardage given up. Holding teams to field goals in the red zone is how you measure success as a defense in the Big 12.

Brett - I've been wondering the same thing for weeks now. Unfortunately, LJW has me in their mobile mode, so I don't have access to the roster to check who creates the depth that allows us not to recruit a full DL this class.

Alright, found the roster at http://www.kuathletics.com/roster.aspx?path=football

Spent some time geeking on the spreadsheet, made some assumptions about scholarship players (probably omitted a couple players that were given scholies but weren't contributing), and came up with these numbers.

19 Seniors, including Taylor Cox but not Brandon Bourbon. This would mean we could recruit 21 for the class of 2016 and have a full roster again. 18 Juniors returning 8 JC's signed (Hopefully at least 1 of the JC's are of these sophs like Isaiah Johnson or Fish Smithson, or RS like Devon Williams, Damani Mosby, Anthony Olobia?) 26 Juniors for 2015, and hopefully 25 seniors for 2016

As for positionally, there are 11 on the OL + 5 in this class, or just 3 yrs worth (16/5) 2 TE's (Jr & So) + 1 or 2 in this class. I think 1 might be a DE. Generally not a huge position of concern in a spread O. 4 WR's (OUCH!) + 3 in this class. That doesn't seem like nearly enough bodies to play a spread O, and some of the F are likely RS candidates. 4 RB + 2 in this class. Darius Crawley is listed at RB, but would seem likely to move back to WR, especially with Kinner being a JC. 4 QB's + 2 in this class. There are all sorts of things that could happen in this group with player development, RS's, position changes (We could use another TE or WR), transfers? 8 DT/DE + 2 DT's in this class. This doesn't include the 3 Bucks, but still seems light, especially at DE where we only have 1 R-Fr after this year. 3 Buck + 0 in this class tho no one gets listed as a buck in recruiting. When combined with DL, this group seems to need reinforcements just as much as OL (13/4 = 3 yrs worth). It will be interesting to see what the coaching staff's thinking is here. 7 LB's + 0 in this class. There are 3 sophs, but only one RSF, so it is understandable that we would be wanting someone in this class. If we have bucks and play 5 or 6 DB's against the spread, 7 LB's doesn't really seem like that small a group tho we need to keep replenishing for the future. 5 CB's + 4? in this class. It looks like there might be 2 JC and 2 HS CB's the class. That sounds about right (maybe a bit heavy?) relative to defensing all the 4 WR spread attacks. 4 DB's + 1 JC in this class. Somewhat unfortunately, all the DB's will be Jr's & Sr's, which leaves us really exposed for the future. It would be nice to get some HS recruits and build some multi-yr depth at this position. We're going to need to recruit this position hard for the next couple years.

Wow, that's way to long for a blog post.

DM, it may have been long, but I was impressed with your research and post (in general) to read all the way to the end. Nicely done.

Me too. Nice work.

Sorry Dirk, but I think your numbers are simply not accurate. I don't have specifics but I do not believe 21 in '16 will bring us to 85. I think you are a bit high on the current number of scholies in hand before this class.