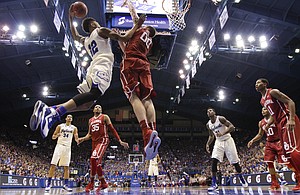 One monster half by each team provided the opportunity for a wild finish and the Kansas University men's basketball team, which dominated in the first half, made more plays than Oklahoma down the stretch and came away with a 85-78 victory at Allen Fieldhouse.

The victory featured 10 KU three-pointers and the Jayhawks coming back from a four-point deficit in the final four minutes after holding a 19-point lead at halftime.

At one point during the later portion of the first half, the Sooners trimmed KU's lead to 13 — 41-28 — and forced KU coach Bill Self to call a timeout. But the Jayhawks responded with a 10-4 run to close the final 4:40 of the first half and led 51-32 at the break.

Not discouraged by KU's hot shooting in the first half, the Sooners came out with a vengeance in the second and displayed some hot shooting of their own, first trimming the KU lead to 4 in just seven minutes and then taking their first lead of the game at 59-58 on a free throw from Buddy Hield.

That set the stage for a wild final 10 minutes, which no one would have expected to see after the way Kansas (15-3 overall, 4-1 Big 12) played in the first half.

Kelly Oubre Jr. led KU with 19 points and 9 rebounds, while Perry Ellis added 16 points and 8 boards and Cliff Alexander, after playing just two minutes in the second half on Saturday at Iowa State, responded to his coach's questions about his “motor” with a monster double-double of 13 points and 13 rebounds in 23 minutes.

• The game turned when: OU opened the second half with a 9-0 run that turned into a 27-7 run, which erased KU's 19-point halftime lead.

• Offensive highlight: It was not just one moment, rather a stretch of eight consecutive made three-pointers to open the game for the home team. Five different Jayhawks got into the act that put KU one made three-pointer shy of tying a school record for most consecutive three-point makes. Brannen Greene, Oubre and Devonte' Graham each made two triples, with Frank Mason III and Ellis chipping in one apiece. Graham's second, the eighth in the sequence, came from the top of the key, bounced off the back of the rim eight feet into the air and then fell through, barely moving the net. Graham was the one who ended the streak with a miss from the left corner, but KU still finished 9-of-12 for the half and 10-of-19 for the game.

• Defensive highlight: KU's toughness down the stretch certainly counts. After going down 69-65 inside the final five minutes, KU forced OU misses on five of seven possessions and built a six-point lead of its own.

• Key stat: Bench scoring. OU got next to nothing from its bench, as the Jayhawks, led by Greene, outscored the Sooners 31-7 in bench points. Greene (12 points, 3-of-4 three-point shooting) had played just eight minutes — combined — in the past two games.

• Up next: The Jayhawks will head back out on the road for a tough test at Texas at 1 p.m. on Saturday. The game will be shown on CBS. 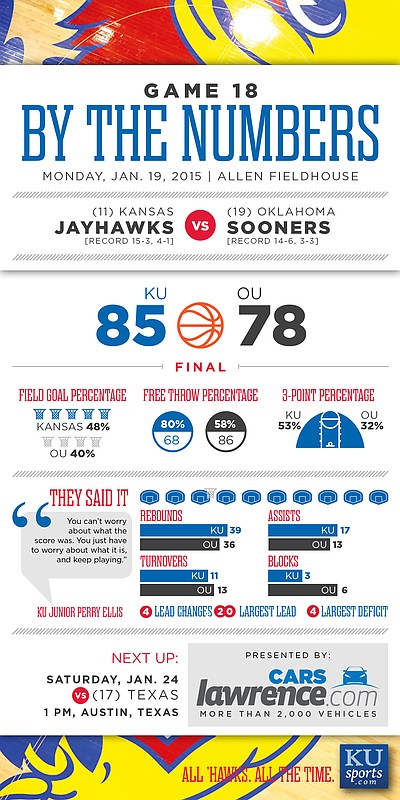 KU basketball is like a box of chocolates, you never know what you going get..... each half, in the same game, in the same arena. at home or on the road...

Its a W, that is the goal. Not sure anyone can be real happy about blowing a 19 point lead and trailing by what 3 or 4? Mercy.

I think coach Self would like to have one practice this season where he can say "alright boys let's have another game like the last one". I bet he wishes he could.

On to Texas, win this next one and we are sitting in a good place for the 2nd half of the conference season.

Disclaimer: Coach Self has the highest winning percentage of all Div I coaches in the last x number of years. He is certainly light years ahead of any of us fans in his basketball knowledge, and that's why he gets paid the money he does at college basketball's most historic basketball program.

I don't understand the result of tonight's game in the context of recent remarks by Coach Self who, when asked in a press conference why scoring is down, explained that it is easier for defenses to stop offenses than for offenses to exert their will upon an opposing team. The tale of two halves tonight seem to belie that observation, as both Kansas and Oklahoma erupted for hugh halves. What's really concerning to me is that Kansas, buoyed by a home crowd, a large halftime cushion, and a practical advantage of needing it's defense more than its offense in the second half (by the above reasoning), somehow managed to roll out the red carpet for OU to get back in the game and take the lead. Does this speak the the character of our team? Im concerned about the Jayhawks' chances in March. The field of teams you will be facing will not allow those kinds of lapses in a game without your being bounced out of the Tournament altogether. Here's hoping we are primed to peak at the right time.

Had to take a look at the record books. Largest lead blown in a loss remains the day in 2003 where we gagged away a 44-24 lead against Arizona and lost 91-74 - a loss we would later avenge...

Tonight, we led 39-19, only to fall behind by 4 in the second half. Happily, we overcome OU's furious surge and won 85-78, but for a long while there we seemed hell-bent on matching that dubious record from 12 years ago.

Game of 2 halves tonight. We looked close to or at our best in many ways in the first half. In the second half, the players looked as if the game was already won. They obviously forgot what this team did to OSU last time out. Glad to see that Alexander took the message Self sent him against Iowa State, as he performed at a higher level. This year is going to be exciting. RCJ

An ugly win is always better than a well played loss and that's all I have on that. This team knows how to win ugly which is important to win games in March and April.

This is a tough team whom I am confident in, in a close game. On the flip side, when they have a lead, they are a nightmare. It happens with big leads, small leads. When we put a run in a team, we are bound and determined to let them run back on us. Very frustrating. However, champions are forged in the heat and and when the game gets hot and tense, this team has the toughness you want to see...

Self is being careful not to push the kids too hard because he knows they're young and it's a long season. You can't be 100% locked in at all times when you're 18 years old. Mentally, most kids just aren't capable of it. We played above average the 1st half and below average the 2nd half. Things evened out and we won the game by 7. We're not more than 7 points better than OU.

A win in Texas puts KU in the driver's seat.

Everyone on target today, especially Rodney and Joe. Clearly, this is an enigmatic team, which raises concerns about the prolonged winning streak you need to be really successful in March. However, with Coach Self and his staff at the helm, I will enjoy the stressful ride as a committed fan.