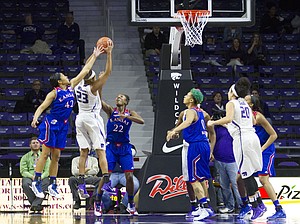 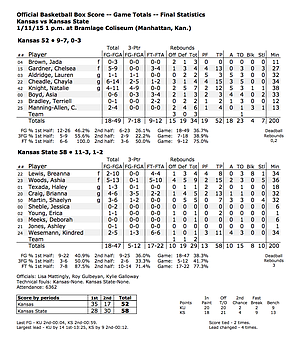 Can we just start the search for a new women's coach now?

No more excuses and second, third and fourth chances. The head coach has to go.

And the beat goes on for Bonnie.

Groundhog day(KUsports will delete this?)

YES it was Zenger- new contract includes $395,000 buyout and her contract was up and we wouldn't have had to pay her a dime. http://www2.kusports.com/news/2014/apr/16/zenger-bonnie-will-be-back-lead-ku-womens-basketba/?womens_basketball

Bonnie was a joke hire when Lew did it(just like Gil) but lets not keep blaming Lew for our current issues. Zenger has fired 2 football coaches(one that he hired) and extended Bonnies contract when we were in the clear!

Btw Mittie had already showed he sucked in the Big 12 when KSU hired him from TCU. So I least figured Bonnie could beat the Kitties like she had when Deb was done. Guess not!

Bonnie was not a bad hire when Lew hired her. She coached for 7 years at Virginia Tech before being hired at Kansas and she took the Hokies to 5 NCAA Tournaments and made the WNIT the other 2 years.

keep believing that. Some of those were in the A-10

56-113 in the league under Bonnie...12-28 vs. ISU/KSU. Angel Goodrich, bless her heart on two bum knees, led us to two straight sweet 16s; she is the only reason why BH has any legacy at all with the Jayhawks.

$400,000 is a pittance compared to the other buyouts we've had to sustain with our footbal program; this better turn around in a big hurry this year, or we should move on. KU can do better...and I would think a lot better.

I think all through this it shows that Doctor Zenger doesn't care about Women's Basketball. I was excited to think when he came things would turn around for our team. I love our girls, but they are missing something. I understand passion for the game, but sometimes they just don't have it. I'm a very sad fan!

Let's think about the timeline of events before saying Zenger doesn't care about women's basketball. Zenger took over in the middle of the 2010-11 season. That season, KU went 21-13 and lost in the second round of the WNIT. That was Bonnie's 7th season and still had not made the NCAA tournament at KU. There was a lot of noise about wanting her gone then because 7 years without making the NCAA tournament is a long time in a major conference. Bonnie was lucky and got a reprieve because the of the change in AD's who basically gave her one more season. KU made the next two NCAA tournaments as one of the last 4 teams in both years despite talent on the roster that should've been a much higher seed. KU reaches the Sweet 16 in each tournament and Bonnie gets herself and extension because of it. I personally wouldn't have given her the extension, but it wasn't unmerited as KU appeared headed in the right direction. Last season, after the extension, KU falls completely flat on their faces and goes 13-19 including a 5-13 and appear headed for a similar record this year and if 2 tournament appearances in 11 seasons after this year including back to back sub .500 seasons isn't enough to convince Zenger that Bonnie needs to go, then I'll agree that Zenger doesn't care about the women's basketball program. Bonnie just got lucky with the timing of Zenger's hire and Angel Goodrich putting the team on her back in the NCAA tournament a couple of times.

Please let me clarify that I think Doctor Zenger is the best for KU. I know Doctor Zenger is at every game that the men are home. I’m very frustrated with BBall! I have been a fan before Coach Washington and I need to vent and it shouldn’t be at him. I know it is his decision not ours, but it’s hard. Plus I would like to know if everyone that has posted this time go to the women’s game. I’m new at this and I don’t mean to offend anyone just sad for our team.