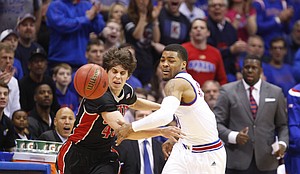 Kansas University sophomore Brannen Greene missed one three-pointer in his eight-minute stint in KU’s 76-61 win over UNLV on Sunday in Allen Fieldhouse.

He’s been slowed by a sore neck.

“It’s been bothering him a while,” coach Bill Self said, noting there is no structural damage. “Sometimes he wakes up and it feels better than other days. There’s nothing structural we can do with it except just rehab. He had his best practice he’s had all year (Saturday). I thought he was going to play great today. Before the game he said, ‘Coach, I don’t even think I can play.’ He wanted to give it a shot. He wasn’t himself moving. We wanted to try it. It didn’t work out very well.”

Also, sophomore Tyler Self didn’t suit up for the game because of a concussion sustained at a recent practice. He’s expected to return to action soon.

“Landen has played great. Hunter (Mickelson) has been good at practice, but those three big guys today played (really well),” Self said of Perry Ellis, Jamari Traylor and Cliff Alexander. “We were up 13-4 in large part because of Jamari. Obviously the second half he changed the whole game from a momentum standpoint with his energy. Perry was solid and good; Cliff solid and good. I didn’t see any reason to go deeper than those guys.”

Of the rotation in league play, Self said: “A lot depends on Devonté (Graham, sprained right big toe). We’ll let you know if he can get on the court moving forward. That would change our team. I’d like to see Svi and Brannen both play well. If we were able to get that done we have five really good perimeter players and five capable bigs. The reality is you will play three bigs with the fourth spot minutes and play four perimeter players with the fifth spot minutes for the most part. I think we are really close to figuring that out.” 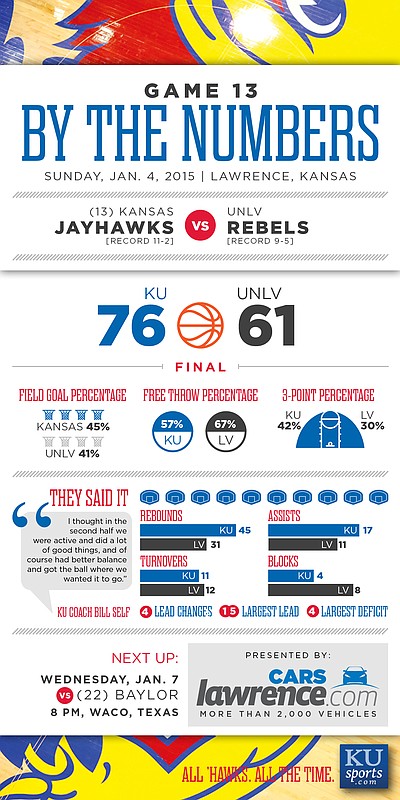 When Self sites Graham's importance and we have 5 perimeter players with 4 to play then goes on to state they are really close to figuring it out does not look good for MyKailiuk, given his PT Sunday. Greene had 8 minutes vs 2 for Mykailiuk, even with a bad neck.

Suzi, you could be exactly right about Svi. However, given his youth, I'm willing to give him a little more time to crack the lineup. The fact is that he is capable of a lot more, so like Kelly Oubre, maybe it is just going to take a little longer. It was just a couple of weeks ago that several posters were predicting that Kelly would transfer due to lack of playing time. In this business, a week can sometimes seem like a year.

"I didn’t see any reason to go deeper than those guys.”

For a coach that is so perceptive about preparing for later in the year (scheduling NCAA tourney caliber, 1st & 2nd weekend teams for the majority of non-con,...), it is peculiar to me that coach doesn't see that the reason goes beyond this game. It would seem to me (non-coach, much less HOF coach that I am) that the reason to go deeper than 3 bigs is getting more game experience as much as it is about morale for the players that have been practicing well not to mention perception of recruits. We will need more than those 3 bigs later in the year. That sounds like a good reason to get more PT to more players early in the season.

I would tend to agree with what has been said here. To me, the way this team wins is with its potential depth. We have seen great moments for 5 big men and 6 perimeter players and I would only call one player consistent (Mason). With a roster showing promise but no consistency, I would say our depth is our biggest asset.

Next is the effort that can be shown when actually in the game. If we start pushing, hard, up in your face defense for 40 minutes a game, utilizing our athleticism/speed instead of relying on height (which we do not have this year) I believe we could really improve our defensive performance. With such depth, we can run and play hard for the full game without risk of having a team full of fatigue.

Another thing is, as Hobbs was saying, some of these guys just need minutes to get into the flow of the game. Hunter, in the one game he played substantial minutes, played fantastic! Svi got pulled yesterday after 2 minutes after he turned the ball over. I saw the travel, and yes it happened. But what happened in those 2 minutes prior? He looked to have more court awareness than anybody else out there, tracking down and saving a ball to his teammate, etc. You just cannot expect somebody to get into any sort of rhythm when they do not get any minutes.