Kansas forward Perry Ellis (34) heads to the bucket against Texas center Cameron Ridley (55) during the first half on Saturday, Feb. 28, 2015 at Allen Fieldhouse.

The Texas Longhorns gave Kansas all the Jayhawks wanted, but KU got tough when it counted most on both ends of the floor and left Allen Fieldhouse with a 69-64 victory Saturday evening.

The win improved KU to 23-6 overall and 12-4 in Big 12 play, and, when combined with Iowa State's loss at Kansas State on Saturday, made Oklahoma the only team that could stand in the way of KU and an 11th consecutive Big 12 title.

KU plays at Oklahoma on March 7. 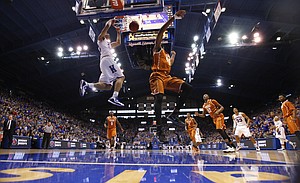 A good portion of Saturday's game against the Longhorns (17-12, 6-10) better resembled a football game or rugby match than a basketball game. Both teams battled and bullied their way to the rim, for loose balls and for whatever points they could muster.

Perry Ellis, this time with a huge chunk of his production coming from the free-throw line, again led the Jayhawks with 28 points. Ellis also added 13 rebounds.

• The game turned when: The Jayhawks responded to Texas building a 6-point lead midway through the second half with a three-minute stretch and 9-2 run that put them back on top with seven minutes to play.

• Offensive highlight: There were a couple of rim-rattling dunks — Wayne Selden Jr., Perry Ellis and Landen Lucas all delivered their versions — but the late alley-oop from Selden to Lucas that put KU up 66-61 proved to be as big as any. Mason also had a huge three-pointer with just under seven minutes left that put Kansas back on top, 56-54, after an Isaiah Taylor bucket had given Texas the lead back.

• Defensive highlight: It was like Oubre set out to get his name in this spot. After two early blocks that helped bring a little toughness, the long-armed KU freshman flipped his hand into the passing lane with just over 7 minutes to play and essentially passed the ball ahead to himself for what turned out to be a breakaway dunk and foul.

• Key stat: Free throw shooting. KU went to the line 14 more times than Texas and made 14 more free throw shots. Such a discrepancy turned out to be huge in a game in which neither team had much luck finding any separation on the scoreboard.

• Up next: The Jayhawks return home Tuesday for a rematch with West Virginia at 8 p.m. at Allen Fieldhouse. KU fell to the Mountaineers 62-61 two weeks ago in Morgantown. Tuesday also will be Senior Night at the Fieldhouse, where Christian Garrett will be honored for his four years with the program. 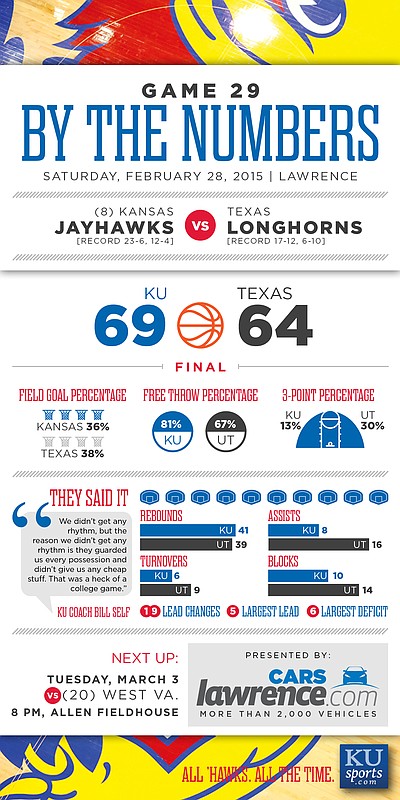 MAAAAAAAAAAAAAAAAAN OUBRE IS SUCH A GAMER!!!!!!!!!!! I love the passion and fire he plays with!!!!!! if he leaves for the NBA I can't even be mad at him he is definitely going to be a good viable piece on any team he and Ellis carried us all game

Dunk you for the lobs, and strong finish by Lucas! And hopefully we won't forget how to shoot & make 3s next games!

HUGE WIN TODAY!!! Our team seemed to get their mojo back when it counted most! This win is undershadowed by the Cliff Alexander news...hoping to hear an update soon. Hopefully just a minor violation, 1-2 games and he's back?? I'm not worried about having him for the WVU game since he only played 6 minutes in the first game, but we definitely need him for the post-season and maybe more importantly, next year!

Staten won't play, another senior went down today; yes, I think we'll be alright against Wv, even without Cliff.

Better off without him!! Not much there to miss

Seriously? Are you a KU fan? No matter what, Cliff is a part of KU family. He will be missed greatly. Against some teams, he might not well suited to play, but there's no doubt his contribution and his loyalty through good and bad times with the team have been a blessing. I'd love to watch him growing as a better person and a player at KU. Let's hope the best out of his situation. Rock Chalk!

In a man’s game, THE man was PERRY Ellis putting 28/13 with 3 blocks! If Ellis leads us to the Big 12 championship with another stellar game v WVa, he has got to be the POY.

Although the team shot terribly from the field (37%) and had 15 of our shots blocked, I thought it was one of our best wins of the season. We never backed down in the paint and blocked 10 of the UT shots. Regardless of their record, UT is really good and can do some serious damage IF they get in the NCAA.

An Hawk win vs WVa coupled with an OU win vs ISU will make us sole champs! Rock Chalk.

I am just throwing this out there: Perry Ellis Big 12 Player of the Year has a nice ring to it. Beat West Virginia and a guaranteed title. We may not be playing pretty, but we are winning. They said this was the year KU was going to lose the streak. They forgot, to be the man, you got to beat the man.

2] Something tells me that todays game wasn't exactly what Doctor Naismith had in mind! If the refs had called the game by the rules, both teams would have been playing their managers at the end!!

3] When was the last time KU had 10 blocks without a natural center out on the court???

4] Texas had so many chances to win this game...I guess that's why they're going to the NIT.

5] Alexander would have destroyed Texas in a game like this where physical contact was not only allowed but almost encouraged by the zebras. Cliff plays, we win by 17.

6] Bill Self, the KU tradition and Allen Fieldhouse are some of the NCAA's Family Jewels.... don't worry. Cliff may be punished but we will sail through in good shape.

7] For who he is and how he is limited, Landon had a damn decent game.

8] Greene may be the greatest shooter/worst defender combination I have seen in almost 50 years of Hawk Ball!!!

So lemme get this straight, Suzi. The same "soft" player with the hangdog look who needed to "play like a man" is suddenly THE man and possible POY in the Big 12?? Just checkin.

Yep. Perry has worked hard to bring out his alpha-Ellis. He's come a long way in the last 7 games but still have a few beta-Ellis lapses. If Ellis goes full alpha the balance of the year....he's in the NBA next year.

Solid play for Perry, that is three games in a row of very solid play.

One more win and we are there. One more!

I hope the "light" has come on to stay for Perry Ellis. Best performance of his career, and at Allen Fieldhouse, best 6th man of any sport anywhere in the world. Kelly Oubre came up a great performance tonight. Landen Lucas had some good minutes when we needed them. Frank Mason had some penetrating drives and some nice kick outs to keep things "honest" and then a few lobs right back in to Perry Ellis in the paint. If Greene can find his shot it would be nice to have it come back now, along with some defense.

I never ever wanna hear anyone doggin on Perry anymore. we don't need it again to the people that had the nads to attack his twitter? REALLY? the kid was a animal- - - again. where would we have been without him this game? suckin buttermilk that's where, the kids playing ball for the school he loves ya may be flashy but who the hell cares? I have noticed though truly he has gotten more aggressive for sure, and for all the pretenders that always holler about how KU pays the refs and such I got a question and even Bilas that people are attacking said before and during the game he says how do you as a team attack a team like Texas? a team with a bunch of shot blockers? you take it right at them that's how be the aggressor force them to make the play that's why you get fouled a lot of the time getting into their body making contact, you sure not gonna win by being passive against a team like that. as far as Texas keeping Barnes pretty sure your going to get that wish UNLESS they buy him out, he just got a contract extension one of their fans was sayin on the ESPN board anyways GO HAWKS

The contract extension will not be a factor in Texas' decision re: Barnes. If the fan base is as upset as they should be given the high expectations, then the money to buy him out will be available. After all, it is Texas. They have money everywhere.

The key is enthusiasm, and by the looks of the crowds I have seen in attendance at the Texas home games, the enthusiasm level is pretty low. If Texas misses the NCAA tournament this year, which seems likely, it wouldn't surprise me at all if Barnes is fired, despite the fact that he is the dean of the Big 12 coaches.