Morgantown, W.Va. — West Virginia, which knocked off Kansas University, 62-61 at home on Big Monday, faces the biggest travel challenge of all teams in the Big 12.

The Mountaineers started the league season Jan. 3 at TCU and Jan. 5 at Texas Tech, with the squad staying in Texas for the two games, both wins.

“You think about it ... we go there (to Morgantown, West Virginia) once, they come here nine times,” Kansas coach Bill Self said of WVU visiting the states of Kansas, Texas, Iowa and Oklahoma. “It’s a lot harder on them than us over time. They’ve tried to set it up to play two games on some road trips.” 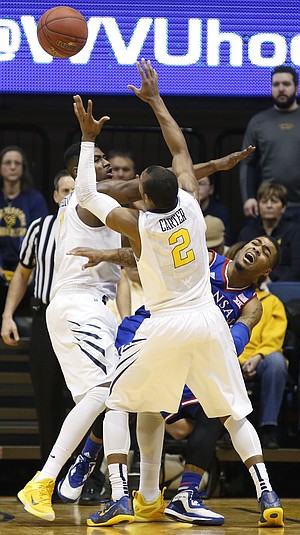 WVU coach Bob Huggins on KU: “As usual, they are very talented. I think they’ve done a great job of adjusting from being a team that I think is more comfortable throwing the ball in close. They’ve really adjusted. They are making a lot of perimeter shots.”

Staten a finalist: WVU’s Juwan Staten, who hit the game-winning shot against Kansas, is one of 10 finalists for the Senior CLASS award, which recognizes four areas of excellence: community, classroom, character and competition.

Self before Monday’s game, on KU’s preparation time for the West Virginia press: “We had to play 40 minutes Saturday against Baylor. Usually our routine between Saturday/Monday games is a 30-40 minute practice. That’s what we did yesterday morning (Sunday) before we took off for West Virginia. It hasn’t been much. We’ve gone over meat and potatoes, how we want to attack pressure and defend them as well. Hopefully we simplified it in a short amount of time where our guys are comfortable.”

A former KU volunteer assistant on Larry Brown’s staff in 1986-87, Popovich at the time was on sabbatical from Pomona-Pitzer, a Div. III program in Claremont, California.

“He is a guy who knows the game very, very well,” Self added. 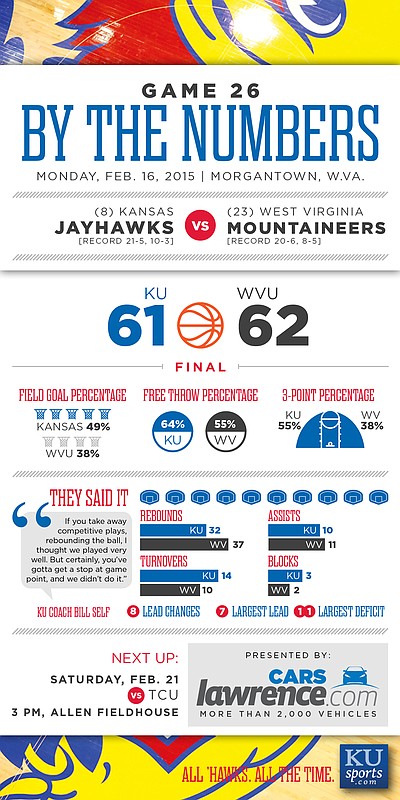 Thanks for the link to the Woodling article about Pop. Pop never did go back to Pomona because the next year was his NBA debut as a San Antonio assistant.

Maybe we can work a trade with the ACC. Louisville for WV.

Funny...since misery left I always thought Arkansas would be a good geographic fit for a replacement...