The Kansas University football team is trying new technology to take a bite out of the sport’s concussion problem.

The Jayhawks will be among the first college football teams in the country to use impact-sensing mouthguards this spring, when they start practicing for the upcoming fall season.

The mouthguards not only let trainers monitor hits taken by individual players in real-time, they also collect data to reveal trends across an entire season for the whole team. 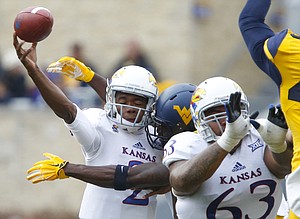 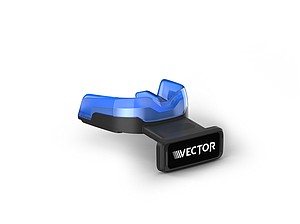 Image courtesy of i1 Biometrics

The Vector MouthGuard measures the linear and rotational accelerations from impacts in football practices and games. Image courtesy of i1 Biometrics. 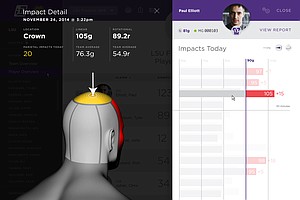 Image courtesy of i1 Biometrics 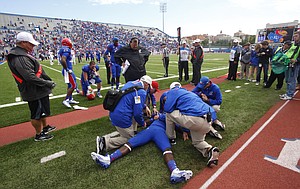 The technology is still relatively uncharted — the mouthguards, tested at high schools and one other college, are being sold commercially for the first time this spring, according to the manufacturer. They sell for $199 apiece. They’re made from a newly licensed durable material that’s supposed to last one year.

Murphy Grant, KU’s assistant athletics director for sports medicine, takes the concussion issue seriously and said he’s excited to have the university’s support for giving the mouthguards a try.

“It’s going to be a very huge undertaking, but for us the safety and healthcare of our student athletes is our number-one priority,” Grant said. “If we can be a part of making the game safer — and keeping the game around — then we want to.”

Grant said KU tentatively plans to order a mouthguard for every football player. He expects about 80 to participate in spring ball.

The spring practice setting will be a good place to try out the technology and see how it goes, Grant said. Assuming well, they’ll keep the mouthguards on the roster for fall.

About 20 to 25 colleges are ordering the Vector MouthGuards to use this spring, and KU will be one of the first shipments, said Jesse Harper, president and CEO of i1 Biometrics, the Kirkland, Wash.,-based company that developed and sells the product. Harper said i1Biometrics is also getting orders from high school and youth teams.

“Concussion management is an area football and other sports programs at all levels are trying to improve in an effort to elevate player safety,” Harper said. “It is our hope that this technology is seen as a very positive move in the right direction.”

To be clear, the mouthguards can’t diagnose concussions — that’s for training and medical staff to do.

What they can do is measure impact to a player’s head and send a digital alert to coaches and trainers when someone’s taken a hit hard enough to cause a concussion.

How does it work?

The mouthguards may be high-tech, but the good news is that football players don’t have to do anything they wouldn’t do with any old mouthguard.

They pop it in and out of their mouth at will, Harper said, and the mouthguard does the rest — even sensing when to turn off and on.

“Think of it like a smartphone in your mouth,” he said. “But a player doesn’t have to worry about any of that. There’s no buttons, no blinky lights, nothing a player needs to do.”

The mouthguards’ “ESP Chip Technology” measures the brain’s linear and rotational accelerations from impacts, according to i1 Biometrics.

The mouthguards use an algorithm to measure, translate and wirelessly transfer data to a handheld mobile device used by trainers on the sidelines. The data can show the magnitude, location and direction of the impact.

Trainers can use the information in real-time to, for example, pull out and physically evaluate a player who took an especially hard hit, Harper said.

After the game, they can take a broader look at data collected for individual athletes — some of whom are affected differently by impacts than others — and for the whole team. Digital 3-D images can show the location and intensity of impacts on individual players’ heads, possibly helping identify trends such as improper hitting or tackling techniques, Harper said.

That broader look is one of the things Harper is most excited about.

When schools purchase the mouthguards from his company, part of the agreement involves sending aggregate data back to i1 Biometrics.

For privacy reasons, schools will keep individual players’ data to themselves, Harper said, but he wants to be able to look at combined data from teams at different levels nationwide and share it with researchers.

“Researchers are really excited,” Harper said. “There’s been no real scalable way to collect this data before.”

He hopes the mouthguard technology and data will lead to improvements in football technique and policies to make it safer at all levels of play.

Harper used to play football and suffered a few concussions himself. His older son, who played at the collegiate level, had two, one of which was particularly bad. So far so good for his younger son, who’s starting high school this year after years of youth ball.

“My wife and I have had multiple conversations about the safety of football and what it means,” Harper said. “Those kind of conversations are playing out in homes across America.”

KU football and other sports have not been immune to concussions. A former KU player has sued the NCAA seeking an undetermined amount of damages for himself and athletes who suffered head trauma during their college careers. Concussions forced star running back Tony Pierson to sit out games in 2013 and limit his time in the position last season. More than one KU basketball player has taken to the sidelines after hits to the head, too.

Grant was a leader in the concussion study that led to the Big 12’s concussion policy and management plan and is known nationally for his work on the issue. He said he wants KU to be a part of finding solutions on a large scale.

He’s also willing to try new things to ensure KU can look out for its own in the process. Like Harper, parents of student athletes have concerns.

“When they come on these recruiting visits, I tell them, ‘I’m going to take care of your son or daughter,’” Grant said. “So I want to make sure that we provide quality care.”

I find the numbers for CTE alarming and what’s worse is, we don’t know how widespread brain injury is. The NFL estimates 28 percent of former players will suffer a debilitating brain injury and this is just the NFL. Doesn’t even take into account high school, college, Arena League or CFL. In spite of footballs enormous popularity it runs the risk of becoming a victim of its own obsolescence. Football coming to an end, at least as we know it is within the realm of possibilities.