Inside the stats: Kansas at Oklahoma State

• Freshman Devonté Graham drew his fourth charge of the season (off Le’Bryan Nash) in the first half. That ties him with Frank Mason III for the team lead.

Graham has 29 assists to four turnovers in nine games since returning from an injury against Georgetown on Dec. 10, 2014. 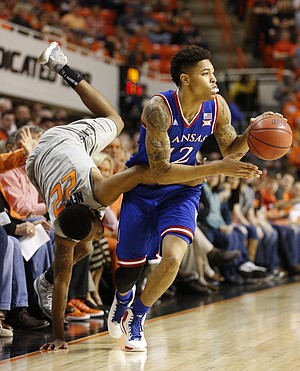 Aside from a trip to TCU where he did not attempt a three, Greene has made multiple threes in five of the last six games. He is 15-of-21 (71.4 percent) during that span. For the season, Greene is shooting 51.6 percent (32-of-62) from three.

• Wayne Selden, Jr., leads the team with 12 games with multiple three-pointers. He hit four in five tries vs. OSU.

• Perry Ellis collected his sixth double-double of the season and 12th of his career with 10 points and 10 rebounds.

• Jamari Traylor had a KU season-high six turnovers, the most since Joel Embiid committed seven against Iowa State (1/13/14). He also tied his career-high with three steals. 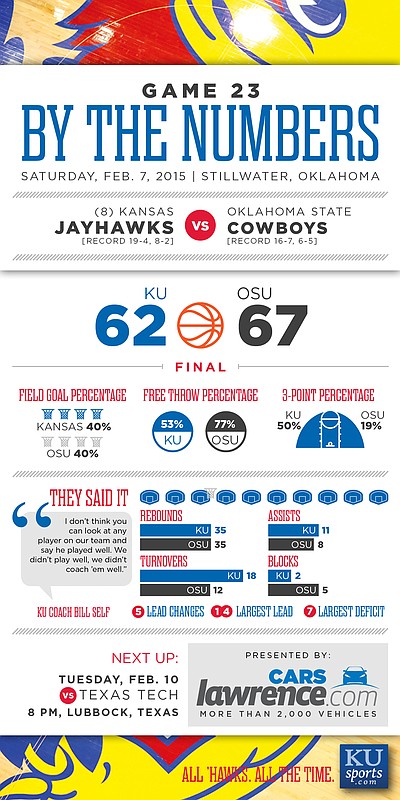 Since you are talking about “inside the stats”, have a look at these numbers

In addition to not having a 5, we really don’t have a true 4. You know you severe problems when we can not take care of the ball, shoot FTs or make layups. As we discussed early in the season, this team has very little margin for error. We can not afford to give away points at the line. We need to be +80 %, if we want to win the Big 12 and have a good tournament.

Apparently nobody told KO we had a game today. I’m on the verge of calling Alexander a bust. He does not have the agility or shot to overcome his lack of size and has a bad tendency to get lazy. I trust Self when he says Alexander is coachable but as things stands now he doe not know how to play team basketball, i.e. screens, positioning (to receive passes or rebound), defensive rotations … He’s

I was hoping we’d have no more Temple type games but it seems apparent this team suffers severely from ADD.

I didn't see today's game as Temple-type at all. It was far from perfect, but we were within one possession in the final minute. We held their best scorer to 13 points. We weren't as dialed in as we should have been, but we didn't lose by 25 to a mediocre team. OSU is a tournament team that has been nationally ranked this year.

"+80%"???...that's a ridiculous #...not realistic for any team...and if that is what you say we need to have to win the Big 12 and have a good tournament, you might as well find yourself a mini-series on HBO and watch it on game nights...

No it was not a Temple-type game, but it was definitely a game we should have won. I can not understand how this team can look like a final four contender for twenty minutes, then look like they are playing their first game of the year the next twenty minutes. But this team does it consistently. Once we are confronted with a little pressure, these guys can not pass, dribble, shoot, or even think straight. What in the world are we going to do against 40 minutes of intense hell? (West Virginia)!!!!.

I do not see OSU as a tournament team either. They may be lucky to finish .500 in the Big 12. And holding a player to 13 points that had the flu with a 103 temp is sure not any thing to brag about. He should not have even been on the floor. I hope to God he did not infect any of our players. This should have been a 15 point win, and the loss may come back to haunt us at the end of the conference. We have four very tough road games left.

This squad does not handle traps and full-court pressure well. This would be a good time to get better at it.

Sorry I did not mention that I agree totally and completely with all of Suzi's comments above, except for the Temple-type comparison. She is right on with everything else. I keep having dreams of us getting Okafor and Jones instead of Alexander and whoever. We would for sure be talking about a NC. But I guess those dreams are just nightmares.

we were +80% early in the year when we won several close games.

Each game the lack of senior leadership is more apparent. The young men are very good, but need the leadership of an upper classman to provide leadership when pressure is applied. At times, the players just appear to not to know what they are to do in given situations.

You are absolutely correct about the team's lack of leadership but I'm not so sure simply being a senior denotes leadership qualities.

I had fully expected that Selden would be the guy providing leadership but....

The last post I will ever make on this site as well as the last time I read posts at the base of these articles. All there ever are are posts whining about trends. Bitch about Selden for 2 games, he has a break out game then everyone is back to praise; and this goes on and on with all the kids. They are kids...the games and AFH atmosphere is incredible...the only consistency in NCAA basketball it the consistent barrage of emotional remarks left on this comments section....you all (and I speak to the repeat authors) are whiny little spoiled brats. We have a 4 loss season (maybe end up with 6-7), and you guys are crying ....I love KU basketball and all that comes with it...except your excerpts....adios!