Ex-KU coordinator Reagan back at Penn 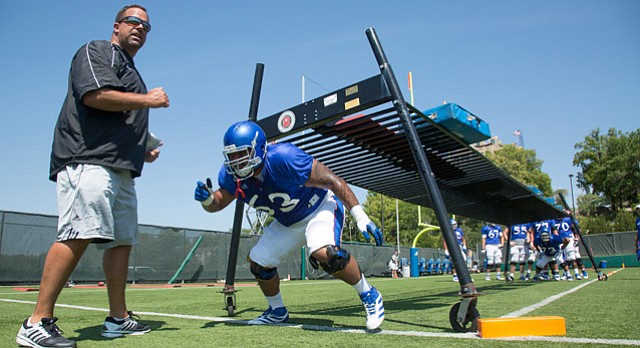 Reagan spent the 1997 season at Penn before bouncing around to jobs at Akron, Air Force, Temple, KU and Rice during the next decade and a half.

Reagan returned to Kansas prior to the 2014 season after serving as the offensive coordinator at Rice but was let go by the KU administration after the end of a season that included the firing of former KU coach Charlie Weis. Interim coach Clint Bowen led the program for the final eight games of the year.

“I am extremely pleased to bring John back to Penn,” Penn coach Ray Priore said in a news release. “I have been able to follow all of his accomplishments since his last tenure at Penn, and he returns with an impressive track record of success. He has an abundance of experience at the highest level, and I could not be more excited to add him to this coaching staff.”

Reagan told the Journal-World earlier this week that he was excited about the chance to continue working as an offensive coordinator and added in the news release that doing it at Penn was icing on the cake.

“Penn football has always had such great support from alums and the university,” Reagan said. “And I’ve always liked the model of the Ivy League. It truly is about the student-athlete and preparing kids to be successful on the field and in life. This was a great opportunity and I can’t wait to get started.”

Good luck with the Quakers!

Can't find the right article to ask a recruiting question so let's try here. Matt, apparently Cam Durley did not sign at his school Friday. Is he still in the process of becoming a Hawk?

Feel bad for Reagan. He should have stayed at Rice….

HE hurt himself badly. Face it, he is not an OC.

My thoughts exactly. When you get fired at Kansas there are not too many opportunties waiting for you.

And takes a huge hit in his pocketbook. I bet the OC at KU makes considerably more than the head coach at Penn.

I'd almost bet he is making more there than a t KU. Pen is a rich Ivy League with BIG BUCKS to back it. But if not its what makes a person happy.

Hope coach Reagan all the success with his old school Pen. I think he would of been a good keep but not so with Beaty. Time will tell. Off on another rant about the Big 12 not wanting to expand to 12 teams because of the GREED FACTOR !!! The Big 12 will again be thrown under the bus by the other POWER HOUSE CONFERENCES because ole JACKA$$ BIG 12 COMISH has his head up his A$$ !!! AGAIN !!! Give this one more year and the BIG 12 will be lucky to get any recruits stronger than a 2 star !!! NO ONE HIGHER WILL WANT TO PLAY FOR A PISSY CONFERENCE !!! Wish the Big 12 would just resolve or get rid of TEXAS & OKLAHOMA along with the BIG 12 COMISH. Then pick up 4 teams to get back to 12 teams. Hell, I'd welcome back MISSOURI & Tex AM if TEXAS & OKLAHOMA would bailout to the PAC 12.

(wow, glad we were able to squeeze it all in between beer swigs...)