It did not take long to recognize the genuine excitement that first-year Kansas University football coach David Beaty carried with him into Wednesday’s signing-day news conference inside Mrkonic Auditorium at the Anderson Family Football Complex.

Sure, part of his wide-eyed adrenaline was the result of a signing day gone smoothly. And the combination of sleep deprivation and any number of caffeinated beverages might have played a role as well. But there was no disputing that the 17 players who signed their national letters of intent Wednesday morning — which brought the total in Beaty’s first recruiting class to 24 — had the first-year KU coach more fired up than ever about the future of Kansas football.

“When I put a smile on my face today, it’s because I’m truly excited about these guys,” Beaty said early during the question-and-answer portion of Wednesday’s media session. “I mean, we have got some really good football players here.” 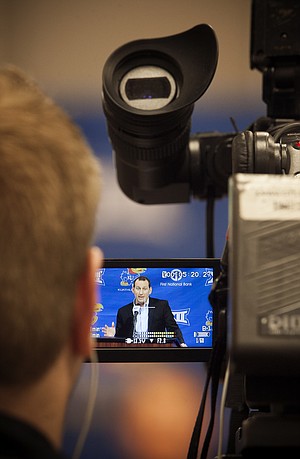 Kansas University football coach David Beaty is seen on the back of an LCD screen as he talks with media members about his committed recruits on signing day, Wednesday, Feb. 4, 2015 in Mrkonic Auditorium.

Just who those players are and how long it will take them to emerge remains to be seen and certainly is not a given. But Beaty, who talked in detail about each athlete in the 2015 class while their highlights rolled on video screens behind him, clearly had his own take on which guys will help the Jayhawks the most quickly.

But there was no escaping that Beaty came away from a wild and crazy six weeks on the recruiting trail feeling pretty good about all of the players he and his coaching staff were able to corral.

Some they got because the player had limited offers. Others they had to fight off higher-profile schools to keep. And still others were diamonds in the rough, whom the KU coaches stumbled upon by chance and went after with intensity.

Regardless of what led them to their seat at the table with a letter of intent to Kansas staring up at them, Beaty said the class had one important thing in common.

“Every one of these kids, before I walked out of their living room, I made sure they wanted to be here as bad as I want to be here,” he said.

Never was the desire to become Jayhawks by the athletes in the current class more clear than early Wednesday morning, when all 17 guys who made their commitments official had their letters signed, sealed and delivered to the KU football offices within an hour of the official starting time of 7 a.m. Such a pace is unprecedented at Kansas, as the coaches in the past typically waited until at least noon and sometimes longer to receive the final letters.

Did the rapid return rate signal a deeper level of commitment from this year’s class compared to previous groups?

“I would love to say that that’s the main reason,” Beaty said. “But I think technology (texting a photo of the letter of intent) has a lot to do with it. That old fax machine, the old paper feed, that would cause a lot of problems on a day like today. We were done (and) looking at each other by 7:45. That’s not normal.”

Twelve hours later, Beaty and his coaching staff were at Abe & Jake’s for a fan-friendly signing-day party. The snow and cold weather took a toll on the head count, but those KU fans who did show up were greeted by a coaching staff that displayed genuine camaraderie and great pride about the class they were able to cobble together.

No matter how much each assistant coach gushed about his excitement over this player or that, each one, like Beaty, made sure to emphasize that, while getting a class you can be proud of is great, it means next to nothing if you don’t follow it up with good, old-fashioned development.

The potential to develop Wednesday’s signees is one thing the coaching staff likes about KU’s 2015 class. And, newcomers or not, they’re all going to get the chance to prove they can play.

“It’s no longer about what anybody says. It’s about what you do,” Beaty said. “We’re gonna go by who’s the best. And that’s easy to see. Everybody on our football team is gonna have an opportunity. Everybody. And they’re only as good as their next day, their next practice, their next rep, and that’s how we’re gonna get this deal done.”

Are we sweeping Cameron Durley under the rug?

Cam is signing today or tomorrow. His school wanted to have a celebration for him and there wasn't time to put it together for yesterday.

Matt, deprivation. Without looking it up I believe deprAvation is a form of depraved (or is that what you intended?)

Nope. Just mixed those up. Thanks for pointing it out. Definitely meant deprived. It's fixed now. Appreciate it!

Looks like we went oh-for in Kansas and went long on Texas leftovers (again).

Obviously, I grew up in Kansas at a 6A high school and saw all that competition, but after 15 years of living here in Texas and watching some of these games, let me tell you something. You could take these Texas leftovers, put them together, and they would smash a Kansas all-star team.

Football is a different animal down here, I remember the first time I saw a high school game down here thinking that the game was so much more explosive and hard hitting than what I was used to seeing in Kansas.

Ryan Willis and Will Smith. The talent pool in Kansas is small enough that coaches have to start now in recruiting them otherwise they will be too far behind in recruiting to land them.

There was a big group of recruits - over half dozen, from KS/KC that got away this year that would have provided a significant improvement (11%) to this recruiting class.

There are not enough quality players to form an entire team, but enough to provide a home grown foundation.

pretty late this yr for Beaty to get really involved with Kansas kids, but has indicated that all 9 recruiters will be working Kansas kids this upcoming yr on top of their own regions, and quote unquote Texas leftovers isn't necessarily a bad thing we will see how well players develops there are some players in this class that's got talent. only one way to go that's up. new year, new coach, new hope lets not be doom and gloom ALREADY. its not going to be an instant fix, you looking for immediate success then go look elsewhere it takes TIME. I hope your not one of these idiots that after 2 yrs I know lets fire the coach - - - - AGAIN. decent class for as late in the game he came in. GO HAWKS

Spot on about Kansas. Plus, Will Smith is from Butler County which obviously counts. Beatty could've padded the numbers in Kansas by just offering schollies to average players (like Terry Allen used to). I'm happy the staff put a priority on players that want to turn the ship around. Again, I agree with your Texas leftover point... Todd Reesing worked out pretty well.

It will also be interesting to see what happens with the walk-on program. That should provide loads of in-state players an opportunity to compete/earn schollies. Guessing next year there will be quite a few more. Sounds like Wrench is doing well and still ready to come back to the Hill for starters.

pretty late this yr for Beaty to get really involved with Kansas kids, but has indicated that all 9 recruiters will be working Kansas kids this upcoming yr on top of their own regions, and quote unquote Texas leftovers isn't necessarily a bad thing we will see how well players develops there are some players in this class that's got talent. only one way to go that's up. new year, new coach, new hope lets not be doom and gloom ALREADY. its not going to be an instant fix, you looking for immediate success then go look elsewhere it takes TIME. I hope your not one of these idiots that after 2 yrs I know lets fire the coach - - - - AGAIN. decent class for as late in the game he came in. GO HAWKS

Gerry, Could you say that again? I didn't catch it the first two times. (this is totally tongue in cheek, please take it as a joke)

lol John, I know bud. not sure why it posted twice sorry. just saw it myself GO HAWKS

Because it was profound! it had to be heard and registered?

I've heard that we are getting 15 walk-on football players this year. Has anyone heard about this number being correct? What are we usually bringing in for walk-on athletes? I think having a good walk-on program would be good for us

It will be interesting to see how many there are and how well they progress in the coming month's, etc.........

This is the kid that I was referring to in my earlier reply.

Jacob. yes that's true I heard that on signing day at least 15 walk on players John Kirby said that during an interview on radio. I know coach beaty is wanting to build the program. coach Beaty was asked about the walk on program during his press conference and he said he could not comment on any players they had not signed, so I guess that also includes walk ons someone said beaty likes to build that way too players that might be JUST UNDER a level where not a lot of offers or someone who is willing to walk on and take time to develop work and grow into possible scholarship. says its not to say these players aren't talented but just takes a little longer takes some sweat and determination on the kids part. I will not lie my friends. I wanted Clint as our coach, but I am getting on board more and more all the time with Coach Beaty. just love his enthusiasm ya I know its his 1st yr and believe me I'm not looking for miracles going to be ugly for a bit, but can't get much worse thanks to the 2 previous coaches. I think given some time he may just ge this turned around. got really good connections, got good assistants that have good connections hoping for the best guys . I'm a JAYHAWK FOR LIFE. and you know and I know true hawk fans stick with the guys good and bad and there has been LOTS OF BAD right guys? but it can be done. I think with coach Beaty and Clint both on board I think things looker some brighter lets get this done guys. looing forward to the open offense the quote air attack GO HAWKS

I remember a coach saying "we may not out talent anybody, but we will out play anybody" Kinda what KU football has to be it seems. Unlike the last 2 coaches, Beaty actually wants to put in the work! Bright future!.