Kansas guard Brannen Greene slaps hands with the students seated above the scoreboard showing the Jayhawks' 89-76 victory over Iowa State on Monday, Feb. 2, 2015 at Allen Fieldhouse.

Everything about the night screamed big game in Allen Fieldhouse.

Long lines snaked from the entrances, waiting for the doors to swing open 90 minutes before tipoff.

George Brett, the greatest third baseman in baseball history, sat in the second row behind the home bench.

Big atmospheres bring out the best in big-time teams. Kansas University left no doubt that it fits that description in rolling Iowa State, 89-76, on a Big Monday night party. 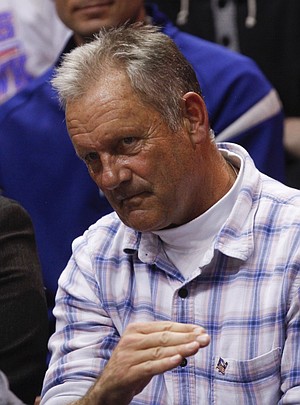 Kansas City Royals great George Brett watches from the seats behind the Kansas bench during the second half on Monday, Feb. 2, 2015 at Allen Fieldhouse.

Bill Self on budding rivalry with ISU and KU's 'eight starters'

Kansas basketball coach Bill Self discusses the excitement of facing and beating Iowa State on Big Monday, and the depth of his KU team, adding he considers KU's rotations players as a group of "eight starters."

Brett was not like so many NBA celebrities, not there in any way to be seen. He was there to see the two best college basketball teams from the region of the country that cheers for his Kansas City Royals. And he was there to support the home team. The Jayhawks gave him plenty of reason to do that.

Brett popped out of his seat clapping a mile a minute after Wayne Selden Jr. hit a three-pointer to cap a personal eight-point run that spanned 71 seconds and gave KU a 46-32 lead early in the second half.

The bench behind which Brett sat always had at least one of KU’s three big wings sitting down, getting refreshed, before checking back in to bury three-pointers.

Selden, Kelly Oubre Jr. and Brannen Greene combined for 47 points in 73 minutes and made a combined nine of 16 three-pointers.

Other nights, small guards Frank Mason III and Devonté Graham play together for long stretches. Options are a nice thing to have, and Kansas coach Bill Self has them and knows how to use them.

All eight had the proper motivation for Monday night’s game. They sought revenge and remembered clearly why they lost to Iowa State in Ames. They lost because they didn’t get back on defense. So, naturally, Iowa State didn’t have a fast-break bucket the entire first half.

“They scored, what, 30 points in transition in Ames?” Oubre said. “Coach kept drilling that in our heads, so we made sure to get back.”

KU had an early drought that didn’t matter because it defended so well, and Greene again came off the bench to close the gap. Nobody played better than Selden, which had not been the case much this season.

“He needed that because he’s been such a great teammate this year, and he hasn’t even performed to the level that can yet,” Oubre said of Selden’s 20-point night. “That wasn’t even the highest tonight because he has another gear. Tonight was a stepping stone that will help him continue to move forward and be a great player like I know he can be.”

If Selden’s season-long shooting woes frustrated him, Oubre said he didn’t see it.

“Never, never,” Oubre said. “I look up to Wayne so much because he has such a great attitude.”

Kansas showed how potent it can be from the perimeter, starting with Greene, who made two of three threes, making him 12-of-16 from long range in the past five games. In the second half, Selden went off from long distance.

Midway through the Big 12 season, Kansas is shooting .396 overall from three and .401 in conference games.

“They’re shooting it a lot better than they have,” said Iowa State coach Fred Hoiberg, a voice of authority on long-range shooting. 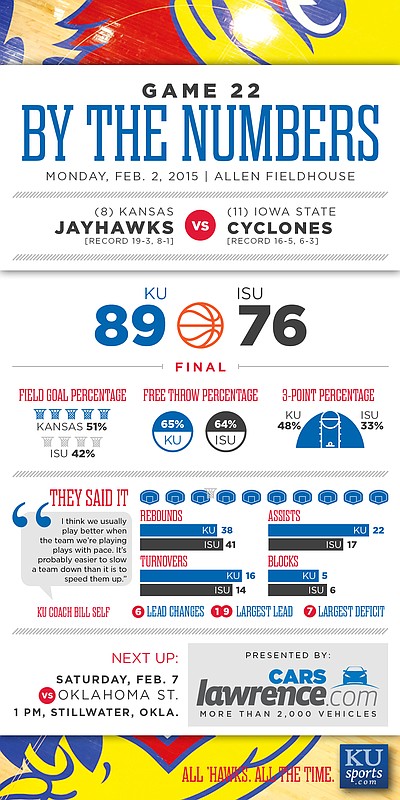 “They’re shooting it a lot better than they have,” said Iowa State coach Fred Hoiberg, a voice of authority on long-range shooting.

Indeed, Fred. In fact, they're shooting 3pt% better than your team now.

No offense to Brett, but I'll take Brooks Robinson!

Trying to be totally unbiased, that's a tough call. Robinson was the defensive ace and adequate with the bat where as Brett the exact opposite. I think it is impossible to make the call, making it acceptable for each team's fan base to be homers.

Brett is my call.

Mike Schmidt might be in the conversation. Eddie Matthews too.

George Brett is my favorite baseball player of all time, but to use hyperbole like the greatest ever is ridiculous. I suppose it is an opinion piece but it's difficult to take the opinion serious when you can't just get a qualified statement like "George Brett is arguably the best third baseman in baseball history". I asked my co-worker who he thought was the greatest and he named Brooks Robinson. And the statement was made three sentences into the column. I started reading and once I got there I thought, "I bet Tom Keegan wrote this".

Tom's next column - Frat boys seem to really like partying.

Don't forget Pie Traynor, who is in the Hall of Fame. How's that for an old-timer!

Good one Harlan. Great player (I assume) and an even better name!

I wonder if Cornbread Maxwell could play 3rd base.

Work on getting the ball inbounds against the press. West Virginia is looming.

I don't want to damper the spirits of a great win, but we must keep focused on the task ahead. Halfway through the conference season 8-1 and getting better. All good things, BUT.....We've got two tricky road games and a baylor rematch(who we beat by one point) before WVU is on the docket.

1) Oklahoma State is gonna be revved up for us, and forte can light it up. Gotta keep him and Nash in check to get a victory. We've improved since we first played them, but this game is not easy at all. They will be fired up and motivated to beat us since they basically have nothing to lose at this point.

2) Texas Tech appears as an easier game on paper, but they did just beat Iowa State at home, so I dunno. We need to get the ball inside in this game and Ellis and Alexander need to dominate. If we can do that, I think we should be able to win this game by a decent margin.

3) Baylor is very jekyll and Hyde, much like OU. When Chery is on, they are a formidable squad. I think this game is the biggest trap game since it's home against a team we already beat and it's the game before we play at WVU. Since we're at home, I give us the edge but we're not that much better than these teams. If we lose focus at all, we're in trouble.

I know Coach Self will instruct them well,but they need to put it upon themselves to continue to play with hustle, energy and intensity. When we put those 3 things together we are very tough to beat. RCJH!!!!

I'm watching West Virginia at Oklahoma, and they don't look good in this game. They're losing by 20 to Oklahoma with 4 minutes left. Now, OSU is going to be tough on the road.

I don't think we'll have a problem with Texas Tech, but Baylor could be a trap game. It is at the Phog. The two toughest games we have left is at Oklahoma and at Morgantown. That doesn't mean there aren't other tough games coming, but Self has made some adjustments that have put KU in the position that it is and I expect the players to keep listening to his wisdom.

The second half of the conference season will be tougher than the first: At OSU At OU At K-State At WVU Texas at home All potentially tough games. If we can get through this gauntlet with only three losses, we'll be doing well.

Your're right, Titus. Four losses wins the conference outright, and 5 gets us a tie in my opinion. Will go a long way towards that if we can sneak one out at Stillwater Saturday.

Tickets are still available for Saturday's game in Stillwater. OSU is formidable, but beatable at home.

KU fans come fill the remaining seats and help the Jayhawks ride herd on the Cowboys!