He forgot one. Close.

Despite getting down by 16 points midway through the first half and trailing by nine at halftime, the Crimson (2-6) used a strong second-half spurt and big-time advantage in the rebounding department to tie the game with 7:35 to play but could not finish the job and fell, 75-69.

“We felt if we could attack those ‘C’ words we would feel good,” Amaker said after the loss. “I thought we gave great effort in those areas. Composure was gonna be big for us. And we talked about that, being down, during the timeouts. We knew we were gonna have to rely on it and I thought they did (the) best they could do.” 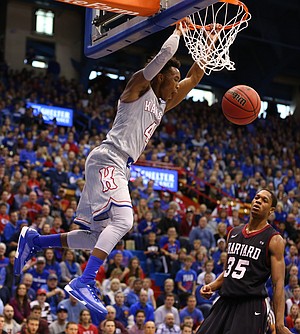 Harvard out-rebounded Kansas 21-12 in the first half and 39-31 for the game. Most of that work was done early, when, at one point, Harvard's rebounding edge read 9-1 on the stat sheet.

“Every game, I think a big part of our identity is to box out and fight for the rebounds,” said Harvard big man Zena Edosomwan, who finished with 10 points and 11 boards. “Obviously, Kansas is a very big, athletic team, so, for us, we had to be scrappy. I didn't know we out-rebounded them, but we were just trying to attack the glass and battle because we knew it was going to be a tough environment against a great team.”

Four Harvard players finished with four rebounds or more. And all but two Crimson players who entered the game grabbed at least one rebound. That included 6-foot-1 point guard Tommy McCarthy, who grabbed four boards and hit three of seven three-point attempts for 11 points to go with five assists.

“I've always had a knack for playing in the moment,” said McCarthy, a freshman from Rancho Santa Fe, California. “I never back down from anyone. I'm confident in myself and my abilities. When it was time to step up, I tried to do my best.”

That attitude was the mindset of the entire Harvard team that entered Allen Fieldhouse knowing that pulling off an upset would be tough but began to believe it could happen more and more with each second that ticked off the clock. 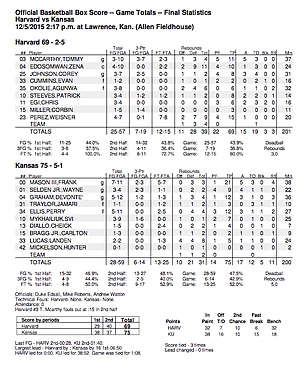 “I don't think we were really paying attention to the score,” Edosomwan said. “We were just playing and trying to compete, controlling what we can control and playing hard on defense, getting stops and rebounding. We were playing our game, playing composed. When that happened, guys were more relaxed and good to go. Better things started happening as the game went on, our confidence built.”

Added Amaker, who said he was pleased with everything but the final result: “I just thought our kids were really locked in on trying to manage the game.” 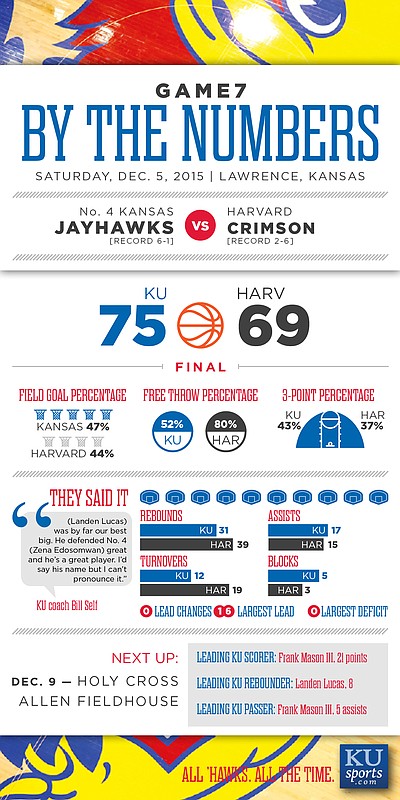 Nice try, Harvard. But just stick to what you do best - not that what you do is very good anyway - namely, cranking out more Marxist politicians who want to strip us of our liberties, bankrupt the economy, and turn us into the United Soviet States of America.

Harvard will definitely win their league once again. Their bigs play well. They are disciplined and coached well. Defense is very good. They will easily beat anybody.