Woodard to be recognized this weekend

Four-time Kodak All-American Lynette Woodard will be recognized for her achievements in women’s basketball during the first timeout of the Kansas men’s basketball game against Harvard on Saturday.

She will also be recognized during the first quarter break of the women’s basketball game against St. John’s on Sunday.

In May, Kansas women’s basketball legend Lynette Woodard was selected as the 2015 Naismith Outstanding Contributor to Women’s Basketball Award delivered by UPS and the Atlanta Tipoff Club. 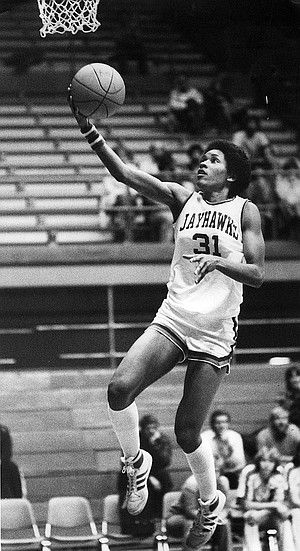 “I am very honored and excited to receive this prestigious award,” Woodard told the Atlanta Tipoff Club. “Thank you to the Atlanta Tipoff Club for recognizing me as the 2015 Naismith Outstanding Contributor to Women’s Basketball Award. I am very proud to be included with such an elite group. I have been blessed in so many ways by the game I love. I will cherish this award and always be grateful for this recognition!”

“We are so excited that Lynette will receive this honor on the court where she did so many wonderful things,” said KU athletic director Sheahon Zenger.

“Lynette is not only the greatest player in KU women’s basketball history, she is also one of the greatest players in the history of the women’s game. This is a great opportunity for KU fans to welcome her back to James Naismith Court.”

She became the first female to play for the Harlem Globetrotters (1985-87). Woodard played professionally in Italy, Japan and two seasons in the Women’s National Basketball Association.

In 2004, Woodard was inducted into the Naismith Hall of Fame and in 2005 into the Women’s Basketball Hall of Fame.

“Since I was hired in April, it’s been a big goal of mine to try to tie our current players to alumni,” said head coach Brandon Schneider. “There’s no greater alum of Kansas women’s basketball than Lynette Woodard. We are so fortunate that the athletic department is honoring her and that she can be around to interact with our current players.”

Along with Woodard, Bill Raftery, who called his first NCAA Men’s Final Four earlier this year, was named the 2015 Naismith Outstanding Contributor to Men’s Basketball.

“These are two legendary figures in basketball who have been tremendous ambassadors of the sport for decades,” Atlanta Tipoff Club executive director Eric Oberman said in a press release. “Their contributions are vast and prestigious and are still held in high esteem today. We are proud to recognize both Lynette and Bill as Naismith Award winners.”

Following her permanent retirement in 1999, Woodard returned to the University of Kansas as an assistant coach for the women’s basketball team. In 2004, she filled in as the team’s interim head coach, after her predecessor was forced to step down for health reasons. Since 2005, Woodard has worked as an investment adviser for Cornerstone Securities.

Arguably the best women's player of all time. A truly great Jayhawk.