Although the Jayhawks (4-2) only led by two in the opening minutes of the second half, back-to-back three-pointers from freshman Kylee Kopatich and sophomore Lauren Aldridge got the offense rolling. KU went on to shoot 9-for-15 in the quarter, outscore Creighton 26-14 in the third and take a 15-point lead into the fourth.

Kopatich, a first-year guard from Olathe, set a new career high with 15 points, and shot 3-for-3 from three-point range and grabbed a game-high seven rebounds — sharing that distinction with junior KU forward Caelynn Manning-Allen. 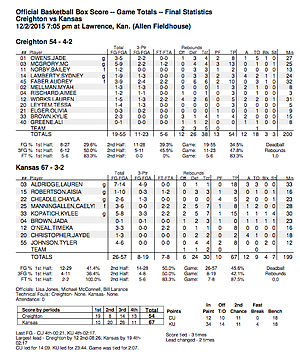 In the game’s opening minutes, Creighton (4-3) seemed on its way to a road win. Five different Bluejays made threes in the first quarter, and KU trailed 19-10 entering the second.

However, Kansas countered with a three-point-powered response. Sophomore guard Chayla Cheadle made a left-corner three, KU’s first of the game, to cut the KU deficit to nine. The next trip down the floor, Cheadle set up Aldridge for another three. When Kopatich cashed a three off an Aldridge assist, KU had gone on an 11-1 run.

Kopatich buried her second three on a pass from junior forward Jada Brown late in the second, and KU led for the first time since the opening minute, taking a 30-27 lead into halftime.

— Check back in later at KUsports.com for more on the game.

Nice going, ladies. You're getting better and better. RCJHKU.

Bonnie Henrickson's team is off to a 1-8 start at U.C. Santa Barbara. Glad KU has a new women's head coach.