It’s time to share a few stories about Bob Timmons, the Kansas University track coach from 1966 to ’88 who died on Tuesday at the age of 91.

Some of these and more — stories galore — likely will be told by folks who attend “Timmie’s” visitation from 6 p.m. until 8 p.m. Monday at Mustard Seed Church (700 Wakarusa Drive) and funeral service at 2 p.m. Tuesday again at Mustard Seed.

U.S. Olympic (1996) pole vaulter Scott Huffman, who is a sales professional with Sanofi pharmaceutical company, remembers Timmons gathering the team on the Memorial Stadium track in 1984.

“He said, ‘This is what we used to do in the service (Marines)’ and got in a pushup position, arm straight,” Huffman related. “He locked his arm 90 degrees and said, ‘We can see who can hold it (position) the longest.’ Here’s this older man (60 at the time). Everybody was laughing. Coach Timmons nailed that thing and beat every one of us. He said, ‘Until you can do that, you are not in good enough shape.’’’ 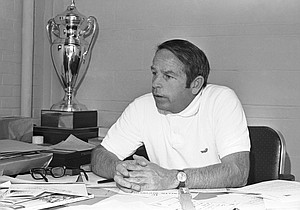 Huffman was just getting started with his Timmie tales.

“One day, it was probably 1988, he wandered to the vault pit we had in Anschutz (Pavilion),” Huffman said. “We said, ‘Coach, you want to learn to pole vault?’ He said, ‘I never tried it before, what the heck.’ He grabbed a pole and got off the ground. The next day he said, ‘I think I pulled a stomach muscle.’ We said, ‘Coach, you’ve got the technique down.’’’

And this final offering from Huffman ...

“As vaulters, we figured a way we could climb up the walls of Anschutz. Thirty feet in the air we’d jump off a beam into the (vault) pit. Anschutz was pretty new at the time. We were leaving black footprints on the wall. Coach Timmons was a little agitated,” Huffman said.

“One day, he said, ‘Come here vaulters. ... I don’t like being called into Floyd Temple’s (assistant AD) office and have him saying, ‘Look at that wall.’

“Coach Timmons had never gotten angry at us before. He turned and walked away. You could see he was mad. Five minutes later, he was chuckling. He said, ‘You are actually a pretty good group of guys.’ He said (jokingly), ‘I’ve got to keep in mind you are not guys I had in the ’60s and ’70s. They’d burn down the Union.’ He said it was not that bad an offense. Don’t do it anymore.”

Jerry Waugh, a Beta Theta Pi fraternity brother of Timmons at KU, remembers a major event in Timmons’ life in the spring of Timmons’ senior year at KU (1949-50).

“He was to go back and run a family business (his grandfather’s bank) in Pittsburg. It was what he was supposed to do as elder of three children,” Waugh said. “He didn’t want to do that. He wanted to coach. He went to Pittsburg to tell his mom and dad he wasn’t going to run the business, which had to be a tough thing to do.

“He came back (to KU) the next weekend and started to become a coach. He began to buy books and studied to be a coach. He made himself a coach. I always admired him for that.

“He started at the bottom in Caldwell, Kansas, as basketball and track coach (in 1950). When he was there, I was at Emporia coaching basketball and track — my first job. I knew real quick I needed to find a track coach, and Timmie was the guy. I talked him into coming to Emporia and taking over as track coach. Then he went to East High (in Wichita) and had so many state champions in track and swimming. He started the Wichita swim club. It’s always been a great AAU swim club.

“He and I talked at that time about going to Arizona. I was selling rings. I didn’t have a job. I stopped by East High and said, ‘Timmie, let’s go to Arizona.’ He said, ‘I can’t leave now. There’s a runner at East. He’s going to be a real good one.’ That was Jim Ryun (future Olympian),” Waugh added.

Don Steffens, public-address announcer at the Kansas Relays every year since 1975, has known Timmons 54 years. Timmons named one of the gates at his famed Rim Rock CC course after Steffens.

“I saw coach Timmons at the state cross country meet two years ago. The year prior to that, I went to his house. He had stuff that was old — books he wrote, thoughts he had. He said, ‘Don, if you want this stuff, take it.’ I said, ‘No, coach. I can’t do that.’ This is some important stuff that probably should be in the library.

“He was so into detail, planning. He’d have three to four color-coded sheets where he’d ‘prognosticate’ the scores (of the meet coming up),” Steffens added. “He was nutty about it. He’d have different colors representing different things that could happen.”

Another Steffens story: “There was a guy, Tyke Peacock, who played basketball and was a high jumper at KU. One Saturday (in February, 1982), he was in a basketball game (against K-State). Timmie flew him into Lincoln after the game for the Big Eight (Indoor) championship. In those days, coaches could say, ‘He’s here’ (before start of events), and he’d be signed in.

“Tyke walked in (late) with the bar 7-3 and won it at 7-5. He was probably the most natural high jumper I’ve seen. He gave the quote, ‘I would trade a gold medal in the Olympic Games for one basket in the NBA.’ Shortly after that he got booted off the (track) team for not coming to practice,” Steffens added.

Steffens, in relating one final story, said Timmons did not like discussing the circumstances of getting the job at KU. Legendary coach Bill Easton, a good friend and mentor of Timmons’, was fired by AD Wade Stinson in 1965 for purchasing a pole vaulting box without Stinson’s knowledge. Timmons in the spring of ’65 had accepted the head-coaching job at Oregon State but got out of that agreement to become Easton’s replacement at KU.

“A lot of Texas schools stayed away from the Kansas Relays in protest after coach Easton got fired. They created the Baylor Invitational in 1966, done as a direct slap to that (Stinson’s) decision. Coach never talked about it. I tried to bring it up a time or two to learn about it. He wouldn’t talk about it,” Steffens said.

Now my story: I was a student-reporter for the University Daily Kansan conducting business in Allen Fieldhouse during the Timmons era when Timmie passed by in the hall with a high school track recruit.

I said hello to Timmons, who knew me (just barely) from covering a few of the Jayhawks’ meets.

Timmons introduced me to the recruit who, I was told, was interested in journalism. I discussed KU’s journalism school with the prospect for a few minutes before we all went on our merry ways.

Imagine my surprise a few days later to get a letter from Timmons, delivered to my residence at AKL fraternity, 2021 Stewart Avenue.

“Dear Gary, Thank you for your help with the recruiting of Mike Fowler. We appreciate your taking valuable time to explain facts and figures related to Journalism. Best wishes, Bob.”

I saved that letter and still have it in my possession today. Suffice it to say I was impressed/touched that a famous college coach like Timmons would go out of his way to thank a lowly student (me) for such a small deed.

Little acts of kindness are the things we remember about people and that little act is one I’ve chosen not to ever forget.

I have "Timmie" stories I tell regularly. But I was at a church meeting the other night and said this to the crowd: "Bob Timmons was the most Christ-like man I ever knew - and that was BEFORE he committed his life to Him." He was just extraordinary. He was a blessing.

My favorite story - I was a discus thrower for him in the late seventies/early eighties...I was having a rather miserable meet at the Big Eight championships at K-State and was all tense and tight because of it. In the back of the ring and getting ready to throw I heard a voice and looked up. There he was about ten yards away grinning, and saying "Matt, smile." I was appalled. Here I was getting ready to throw in a weight event at the championship meet and he was telling me to...smile? So, I did. And relaxed because of it. And that throw won the meet.

Great story, Matt. Timmons was one of my favorites, just like Bob Frederick. A very very decent gentleman. You never forget the true gentlemen you meet in life. Rest in peace, Bob Timmons.

I worked for Timmie at Rim Rock laying sod in the early 2000's. He worked just as hard as any of us high school kids, and was as humble as could be. He was on his knees in the sweltering heat, sweating along with the rest of us.

After one especially hot day, I'd done something stupid--I think I overwatered the sod--and felt awful about it. Instead of getting upset, Timmie smiled and told me of the multiple times he'd accidentally driven the tractor into one of the ponds on the property while mowing. If he could laugh about driving expensive machinery into the pond, surely I could laugh at myself for putting a little too much water on the new sod.

I learned many things about life working with Timmie, and I'm grateful for the time I had with him.