“To have six in a row over them, you gotta build on that with the rivalries you have, and I’m pleased that we extended the streak to six,” KU coach Ritch Price said. “It just shows the progress that we’ve made. We are a Big 12 Conference member, and we expect to play at a high level.”

The Jayhawks (17-24) used a combination of big swings, clutch pitches and timely breaks to take the season series from the Shockers, two games to none.

Two of the biggest blows came from the bats of senior Dakota Smith and freshman Matt McLaughlin, who each ripped home runs to help the Jayhawks power their way past WSU.

Smith’s homer, his sixth of the season, was a three-run shot to left-center field that gave Kansas a lead it would never relinquish.

McLaughlin’s bomb, the first of his career, came in the bottom of the fourth and was closer to a fluke than a pure display of power.

With senior Connor McKay running on the 3-1 pitch at first base, McLaughlin noticed that McKay did not get a great jump. The pitch, a fastball, was what McLaughlin called “a borderline pitch,” but with McKay running he knew he had to swing at it. 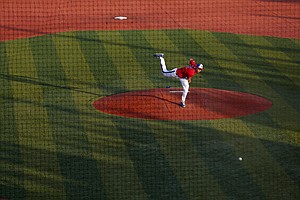 Images from the Jayhawks' game Tuesday night against Wichita State

Not only was the homer the first of McLaughlin’s career, it also was his first of any variety at Hoglund Ballpark.

“He’s gonna be a really good player,” Price said of McLaughlin. “But he’s never hit a home run in (batting practice), just so you know. Right now, though, he does a really good job of using the whole field and having quality at-bats.”

Wichita State (14-26) scored three in the sixth and added another on a throwing error in the top of the eighth to cut KU’s lead to 9-6. But doubles from Owen Taylor and Tommy Mirabelli in the bottom of the eighth gave KU and closer Stephen Villines all the cushion they needed for the final inning.

“It just feels good to get back on track and swing the bats well,” Smith said. “It was a good start to get everything rolling again for (the weekend series at) West Virginia.”

Well, at least we can beat Wichita State in something.

We can beat them at plenty of things. Including basketball blowouts the last 5 times we played them prior to this year. They are probably better than us in bowling.

as Ryan Robertson said "why wasn't WSU asking to play us in the 90s?"