Kansas sophomore Michael Tinsley races towards home in front of the Texas dugout during the Jayhawks' game against Texas Saturday evening at Hoglund Ballpark.

Less than 24 hours after walking off the Hoglund Ballpark field with their heads hanging after a devastating 14-inning loss to Texas, Kansas University’s baseball team left Saturday’s 5-4 victory like over-caffeinated teenagers leaving a rock concert.

Senior left fielder Connor McKay was the man to blame.

Clutch pitching from Sam Gilbert and a big-time catch from McKay (who else?) kept Texas from taking the lead in the top of the ninth despite a leadoff double. 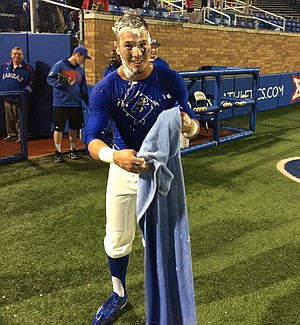 Kansas University's Connor McKay towels off after his postgame treat of shaving cream and Gatorade. McKay hit a walk-off home run that sent KU to a 5-4 victory over Texas on Saturday, April 18, 2015, at Hoglund Ballpark.

KU’s Justin Protacio and Tommy Mirabelli opened the bottom of the ninth with hard-hit fly outs.

Then McKay, a senior from Parker, Colorado, sent his first pitch on a screaming trajectory that ended three-quarters of the way up the light pole in left to give the Jayhawks a dramatic victory.

“The guys in front of me both hit it hard,” McKay said. “And I looked down to (third-base coach) Ritchie (Price), and he gave me the green light, so I decided if I got a pitch I was gonna swing at it.”

As McKay made his way around the bases — which, unlike a lot of home-run trots, looked more like a sprint — the KU dugout emptied and formed a wall of white uniforms around home plate. As soon as McKay reached his final destination, he was mauled and not seen again until the scrum wound up near the pitcher’s mound, and a fired-up and roaring McKay emerged from the pile without his jersey.

“It was an experience I’ll remember the rest of my life,” McKay said.

And it didn’t stop there. As the Jayhawks (16-23 overall, 4-7 Big 12) ran to right field for a quick, postgame meeting with coach Ritch Price, several players barked at the UT dugout. The words went the other way Friday night, and the high intensity displayed in Games 1 and 2 should make today’s 1 p.m. series finale quite dramatic. 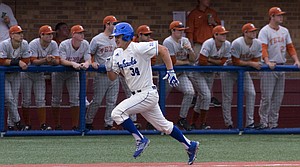 Kansas sophomore Michael Tinsley races towards home in front of the Texas dugout during the Jayhawks' game against Texas Saturday evening at Hoglund Ballpark.

“You know what? I actually liked it tonight,” Price said of the fire from his dugout. “When you bring that much emotion into the ballpark, my guys aren’t backing down. I was so proud of them. We could’ve been flat as a door nail after that devastating loss (Friday) night.”

The Jayhawks weren’t. And they proved it by giving McKay a faceful of shaving cream and a Gatorade bucket over the head as he talked with reporters about his game-winning blast.

Added Price: “That’s what makes college baseball special. To see the players’ reaction and the euphoria was a special moment.”

It was an absolute no doubter. If the light pole didn't get in the way, it may have uprooted a tree. That ball was absolutely jacked.

Way to go fellas. Keep it up McKay! Rock Chalk!!

It has gone too far, Matt. We need a moratorium on "fires up" or any variation of the phrase.

It's just too much to deal with right now.