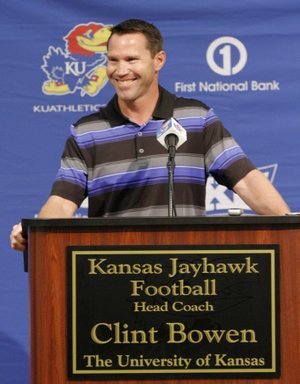 It was the final act of a whirlwind day for Bowen, who officially took over for the fired Charlie Weis on Sunday morning. And, as far as first days go, it could not have gone much better.

“Clint Bowen represents the best of what KU football has been over the years,” KU athletic director Sheahon Zenger, unable to find a seat at “Hawk Talk,” told the Journal-World. “And it’s been incredible to watch the response by players, coaches, staff and alumni.”

Maybe it was just the familiar faces in the crowd or the lingering joy of all that had just happened to him, but Bowen certainly looked comfortable throughout the day Monday. First was an introductory news conference at 9 a.m. By 9:30, dozens within the athletic department were buzzing about the impression Bowen made. After that was a 10 a.m. Big 12 coaches conference call, when Bowen answered questions about everything from his new job to recruiting to West Virginia. By Monday evening, after another spirited practice, Bowen was there at Salty Iguana with a headset and a smile.

Asked by Davis where the radio show ranked in the scheme of the day’s events, Bowen smiled and said, “This was the highlight of my day.” It wasn’t the first time he said that.

And so the Bowen era had begun. Interim coach or not, Bowen’s energy seemsto have reenergized an entire town, many of whom just may start supporting the football program a little more.

“It feels like we’re a family again,” one fan in the “Hawk Talk” crowd said.

Bowen to bring it

Asked about his normally spirited game-day antics on the sideline, Bowen said KU fans should expect to see more of that in the next several weeks.

The day after Bowen will make his KU head-coaching debut — 3 p.m. Saturday at West Virginia — Bowen’s high school coach, former Lawrence High leader Bill Freeman, will be inducted into the Kansas Hall of Fame in Wichita.

“You’re right, that is this weekend, isn’t it,” said Bowen, the emotion building in his voice. “Bill Freeman … you’ve got to love him. What a great honor.”

Bowen said some things would change as the Jayhawks move forward. One of the biggest changes sounds like it will be where offensive coordinator John Reagan works on game days. Bowen said Reagan likely would move from the field to the booth to call the games. Another change is the way the Jayhawks practice.

“We have a philosophy of where we believe that these are college kids that need developed on a daily basis,” Bowen said.

Later, he summed up the switches during his radio show.

“We’ve made a lot of changes,” Bowen said. “But they’re small in nature. We can’t upset the whole apple cart.”

Bowen said several former teammates and coaches reached out to him throughout the past 48 hours. He noted a couple of them before thanking his wife, Kristie, for her sacrifices through the years.

Michigan State coach Mark D’Antonio, Bowen’s position coach at KU, Dan McCarney, who hired Bowen at North Texas, and Glen Mason, who both coached and hired Bowen at KU, all reached out shortly after the news broke.

“I got off that practice field, and there were well over 100 text messages from people just saying congratulations,” Bowen said. “And it truly means a lot. The Jayhawk family is so awesome. It has been forever and it always will be.”

Bowen thanked former KU boss Charlie Weis for bringing him back to Lawrence and helping him learn and said he exchanged texts with the former KU coach in the hours after his firing. As for student-manager Charlie Weis Jr., Bowen said the details of his future with the program were still being worked out.

“We haven’t completely, 100-percent established what that role is yet,” Bowen said. “He’s a great young man, a hard, tireless worker, a good kid. ... We’ll have some type of role provided if he wants to be a part of that.”

I'm also up to looking further at Ed Orgeron, after reading http://www.usatoday.com/story/sports/ncaaf/2014/09/29/college-football-coach-ed-orgeron/16445989/

I'm hoping this proves to be the beginning of a long and very successful head coaching career for Clint Bowen. Not only does he deserve this opportunity, if it works out we have a good head coach for the next 25 years. The smile on his face in the picture with these articles says it all.

I find myself rooting for Clint Bowen. You always want someone who wants to be here and he clearly does.