By no means an expert swimmer, 6-foot-81⁄2, 240-pound Kansas University basketball freshman Cliff Alexander was told to tread water with his teammates early Friday morning in the 12-foot deep end of Robinson Pool. 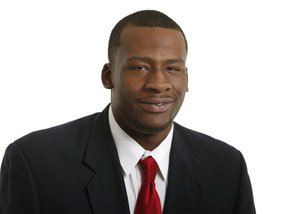 Seeing the future NBA power forward could use some help during part of “The Program” — a grueling two-day regimen put on by Marine Eric Kapitulik — freshman Devonté Graham and sophomore Tyler Self took turns monitoring Alexander’s position underwater and from the side.

“You’ve got to trust your teammates. Cliff had the trust in us we wouldn’t let him drown,” Graham said after the conclusion of The Program, which had 16 Jayhawks in the pool at 5 a.m. Friday, following five hours of mentally and physically taxing drills Thursday afternoon and evening.

“The main thing is, it’s not about yourself. You shouldn’t be worried about what you are doing. It’s all about your teammates. All the selfishness we had going on, people wanting to be about me, me, me, me, me, we just turned it around. Now it’s about, ‘We’ve got to do it together,’’’ added 6-foot-2 point guard Graham, the one Jayhawk presented a T-shirt (with The Program logo) by the Marines, signifying top leadership skills of all participants.

“You really see who will help you when you are surviving for your life,” noted sophomore guard Wayne Selden Jr., who was in charge of a “mission” in the water in which players had to remove their soaked sweatshirts and pass them to a teammate, who put the shirt on following Selden’s command.

“I could say it wasn’t the most tiring thing I’ve done, it was the hardest thing I’ve done because we all were out of our comfort zone,” Selden added. “We’re basketball players, not swimmers, so being in the water really threw us off.”

The activities by no means were confined to the pool.

The Jayhawks on Thursday performed a “Fireman’s Carry.”

“I was the (command) leader of that (drill),” Graham explained. “I was encouraging them like, ‘Keep ’em up; keep ’em up. You are almost there.’ They had to drop ’em (teammates) down on my call.”

The Program was not some hokey two-day exercise that ended with the Marines presenting each Jayhawk player a diploma.

In fact, it ended with the players receiving a stern talking-to.

“He (Program leader) sat us down on the bleachers and told us how bad our first day was and how we wasted our first day because we weren’t buying in, but today we had a good day compared to yesterday,” Graham said Friday afternoon. “We were better teammates today, and that’s what he said. We have to be leaders. Not one of us, but all of us have to do our job.”

Stated Selden: “They kept it real with us. Our first day wasn’t good, so it wasn’t ‘congratulations’ on our first day. The start to something on the second day was a good start for us. They gave us a debriefing and let us know where we have to keep going, what we need to do to stay consistent as far as leading.”

Selden definitely believes the just completed two-week Boot Camp (compared to one week a year ago) plus the two-day Program will greatly benefit the 2014-15 Jayhawks, who open practice next Friday and will debut publicly at the Oct. 10 Late Night in the Phog.

“Two weeks of Boot Camp ... it’s the standard. It’s what we are about here at Kansas,” Selden said. “And I felt those last two days of The Program really helped us. It really built continuity and togetherness that we didn’t have last year. We were never tested like that last year off the court. It was a different element. We had to stay together after being in our own heads in the beginning.

“We began a start to something we want to continue doing.”

To see The Program in action, go to http://ljw.bz/1xkNrl9

Really interesting comments, especially Selden's take about not being together last season.

Brilliant HCBS! In this era of one-and-done players, it's vital to build team chemistry before taking the court. Has this been tradition, or is this just the first I've heard of it?

You cant have FOE without "Family"...something that felt missing last year.

This is the first year for The Program, but I'm guessing it won't be the last. It sounds like a huge benefit.

This sounds like it went really well. They could probably use a couple more days of it. Devonte being called out for especially good leadership is a great sign. I think all the fanfare last year around Wiggins at the beginning, and then the crazy JoJo hoopla that spun out of control mid-season must have been terribly distracting. And when your two best players have guaranteed rides to the next level, a sense of complacency becomes contagious. And the rest of the team spent a lot of time watching those two and deferring to one another. There was a lack of cohesion last year that was very unlike most of Self's teams. Wiggins may be a phenomenal player, but he was not a great leader. He's one of those humble kids that are almost embarrassed by the incredible athletic gifts they've been blessed with. B-Mac was similar, in my opinion. This year's collection of players may be just 'under-the-radar' enough to set egos aside and play as a real unit. Here's hoping...

EXCELLENT POINTS ON THIS POST, BY ALL OF YOU. Suzi, I could see, early on last year, that we were lacking, being together as a team, because when you go to 'one player', as much as we did, as Eliott says, people we left standing around, just watching. Craig, you are right, that bringing in 'The Program', was a brilliant move, by HCBS, and from all accounts, it does seem to have worked. Now let's see if it translates to the court. Also, 'The Program' is not new, but it is new to K.U. Rock Chalk, all of us Hawks.

PS: Is anyone going to the 'Champions Classic', or to the Tournament in Florida. I'm going to both. I'm driving to Indianapolis, and flying to Florida. If so, we should get together. I love trips like these. I also go to most of the NCAA Tournament games, and will be doing so, again, this season.

We might go down and the away games, especially through Texas since the tickets are so affordable. The Alumni Association meeting sites for the pre/post game parties are a big hit.

oh, and, one other thing. I really liked what I saw, in the videos I have seen, of DG, and now, to have him be the only Jayhawk, to get a 'Leadership T-Shirt', was very interesting (especially as a freshman). Not FM or CF? I also like a point Guard, with a little more size, which DG has. But I still love CF and FM! What do you guys think about DG getting that accolade?

Although i am not buying into the Devonte hype before i see him play i am excited to see his development long term in the program. I agree Suzi, the comments about last year were very telling.

Ian, I understand your apprehension. But I don't judge on hype! I saw his videos, of live action, against good competition! Now, like every other player, he still has to translate that, to the major college level, but I really believe, from what I have seen of him, that he can do that, and help us be a much better team, just as I believe our other guards will do.

I lifeguarded for this and the guys were amazing! Close to half couldn't swim at all and the trust they had to form with their teammates will definitely make a difference on the court!

I was wondering what kind of safety precautions were employed and assumed there were lifeguards on duty.

Wow Erika! I bet that was cool. Maybe you could get these guys to do the football team!

GOOD JOB ERIKA. Thanks for being there for them. Also, Suzi, I can tell you that all of the Marines are probably at a higher rate, than just being expert swimmers. They sometimes have missions that I would not even think about trying. I'm skeeeeered! LOL

Suzi, Cool. I agree, the pep rallies are incredible! I have only been to 2 away games (outside of the NCAA Tourney games). I have been to O.U. several times. I got a chant going around the site: Allen field House South. Even the O.U. fans were telling me it seems that is true. It may be a little harder for so many K.U. fans, to get tickets there, going forward, but some will be available. I also went to TT last year. Dang that is a long drive. LOL Let me know what you figure out about the Tournaments.