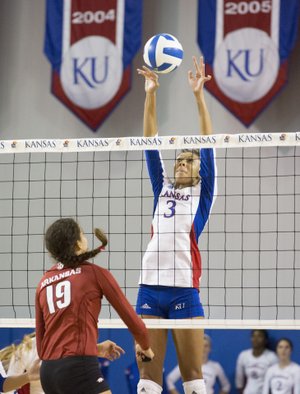 Kansas freshman middle blocker Kayla Cheadle (3) gets up to block a spike attempt by Arkansas' Ana Sofia Jusino (19) during their volleyball match Saturday evening at the Horejsi Center.

“Actually, yesterday my friend happened to re-tweet something that ‘KU volleyball’ tweeted about diving in a row of chairs. My response to that was, ‘It’s not a sport if you are not breaking something.’ So I think I can live by that motto,” Wait said after recording 26 digs with four assists in KU’s 3-1 victory over Arkansas in Horejsi Center.

Wait, a 5-foot-8 sophomore from Gardner, earned MVP honors of the weekend Jayhawk Classic and was joined on the all-tournament team by freshman setter Ainise Havili.

“It’s been a little shaky,” Wait said of her health as an ultra-active libero during her still-young KU career. “We are on the up now. We are looking to just stay as healthy as possible and keep fighting until the end.”

“I mean, at times I think everybody on our team deserves it. Without them, I wouldn’t have an opportunity to do anything,” Wait said. “They funnel the ball to me. They give me the opportunities to dig.”

Havili, a 5-10 freshman from Fort Worth, Texas, made the all-tournament team in three of KU’s four preseason tournaments. She had 51 assists and 12 digs against Arkansas for her sixth double-double.

“I think it helped that we won three of the four tournaments. It was definitely a team thing,” Havili said.

Of MVP Wait, Havili said: “She is a rock star. She is in back picking up everything. It’s great to know that balls are going to be picked up for me. Even if I am out there, if I’m cheating or something, she’ll cover me.”