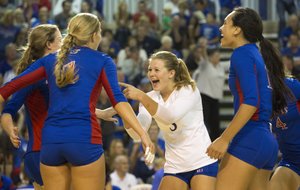 About a dozen members of Kansas University volleyball coach Ray Bechard’s family held up poster boards that spelled out the message “1000 wins, Rock Chalk Coach B” after the Jayhawks’ 3-1 victory over Cleveland State on Friday night in Horejsi Center.

Bechard received a commemorative game ball from KU associate AD Jim Marchiony, then went into the stands to hand the ball to his wife, Pam.

“If you are lucky to grow up in a household where athletics are important and get around some good coaches in your high school and college days, and they influence you enough to be a coach, and then you get administrators that give you a chance and surround yourself with enough good players and coaches and stay in it a long time, you are going to run into some number sometime,” Bechard said after improving his 17-year mark at KU to 284-219.

“It’s been kind of cool to hear from a lot of players who were a part of that and coaches and obviously share it with this year’s team.”

The No. 24-ranked Jayhawks (11-2 heading into today’s 6:30 p.m. match versus 6-6 Arkansas) were paced by Kayla Cheadle, who had 14 kills. Chelsea Albers contributed 13 kills, while Sara McClinton and Madison Ridgon had 11 apiece. Kelsie Payne had eight kills and six blocks, ruling the net in the final two sets.

“Before the game, we talked about getting this not only for us but, ‘This one is for coach,’’’ senior outside hitter Albers said. “I think you saw that in our start. We were pretty energetic. We did this one for coach. For us to be able to put him on the map in that aspect is a really cool thing, especially to do it in our home gym. It’s awesome to be playing for him when he got that milestone.”

Bechard, who went 716-60 in 13 years at Barton County, always longed to be Jayhawk coach.

“To be able to coach at your dream school and bring some pride to your athletic department ... I think that’s what our volleyball program has done, and we do it the right way. The kids represent themselves very well. They work hard. I think they are easy to follow and get behind. Hopefully we can play well tomorrow and get ready for a competitive Big 12 conference season,” Bechard said.