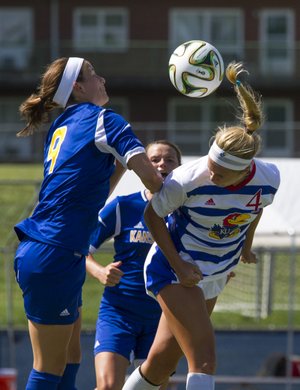 Kansas extended its school record start to 8-0 following a 1-0 victory over UMKC on Sunday, Sept. 14, 2014 at the Jayhawk Soccer Complex.

Kansas University soccer peppered UMKC with 22 shots before KU junior Ashley Williams lifted the 23rd past goalkeeper Nina Tzianos in the 82nd minute to give KU a 1-0 victory Sunday at the Jayhawk Soccer Complex and extend the Jayhawks’ record-setting start to the season.

Kansas moved to 8-0 and set the school record for longest unbeaten streak. UMKC fell to 3-3-2.

The Jayhawks dominated Sunday’s match in every category except scoring.

On the attack 81:49 into the match, Williams received a pass from sophomore Jackie Georgoulis five yards outside the top-right corner of the Kangaroo penalty box. Williams gained possession and dribbled to her left toward the top of the box. She left-footed a shot from 18 yards out that went just under the crossbar.

It was her third goal this season, second in two games and 13th of her career.

The Jayhawks’ 27 shots were also the most by a KU team since they tallied 29 shots against Arkansas at the beginning of the 2011 season.

Six Kansas players had three shots or more, including junior Liana Salazar, who tallied a career-high six shots on the day.

Goalkeeper Kaitlyn Stroud helped the Jayhawks to their third-straight shutout and also notched a pair of saves.

Stroud has now amassed 229 saves during her KU career, which moved her up to third on Kansas’ all-time saves chart.

Kansas has kept its opponents scoreless for almost 280 minutes and has still yet to trail in a game this season, boasting 732 minutes of play without falling behind.

The Jayhawks will hit the road to face Marquette on Friday in Milwaukee. Match time is 7 p.m. at Valley Fields.

This is a fun team to watch. We got to catch their game against SMU, and are coming back for the Texas Tech game on 10/17! Psyched to see them play under the lights at the Rock Chalk Park.