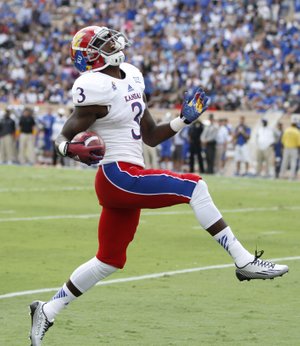 Images from Saturday's game between the Jayhawks and Blue Devils in Durham, North Carolina.

— CB Shepherd stands out for KU

Durham, N.C. — Following his team's 41-3 loss to Duke at Wallace Wade Stadium on Saturday — the eighth loss of 34 points or more in his two-plus seasons — Kansas University coach Charlie Weis fielded questions from the media for just over 15 minutes and gave logical, well thought-out, honest answers to anything thrown his way.

The tone with which he provided his thoughts was not one of rage or anger, rather that of a man calmly searching for answers.

According to Weis, it was not the same scene in the locker room during the moments leading up to his meeting with the media.

“I wasn't calm about 15 minutes ago,” he said. “I'm calm because I've already said to them, 'What's it gonna be, fellas? I'm glad to go in front of the media and take the hits. I've got no problem doing that. But if you don't see your role in a game like that, then you're missing the beat.' And I think that we have enough guys that care.”

Weis has been known for “taking the bullets” for his team and Saturday was no different. Although there were a couple of times when he referenced needing to watch film before answering, Weis shouldered the bulk of the blame for KU's latest gut punch.

“After a game like that, I tell them that I'm gonna come in here and say that we weren't ready to go at the start of the game and, ultimately, the one responsible for that is me,” he said. “That being said, I'm sure when we look at the tape, there'll be plenty of blame to spread around.”

It was Shepherd on the all-ACC product Jamison Crowder and McDonald charged with guarding 6-foot-6 monster Issac Blakeney. After an initial adjustment period that led to the Blue Devils' first touchdown, the two KU corners did a solid job of shutting the dynamic duo down the rest of the day. Crowder and Blakeney combined for just six catches for 52 yards and no touchdowns.

“(Blakeney) was who I prepared for the most,” said Shepherd, who finished with three tackles and one pass break-up. “The difference was their quickness and speed, but we go against guys like that all the time in the Big 12. When I saw (Crowder), I just lined up and said, 'Let's go. Me and you.'”

KU linebacker Ben Heeney tied a career-high with 15 tackles in the loss, marking the 13th double-digit tackle game of his career. Heeney recorded five solo tackles and 10 assists and also added one of the team's two tackles for loss.

“Ben's a trooper,” Weis said of his middle linebacker. “Even when things aren't going well, Ben wants to be out there. He's a leader, he's a tough guy, it's important to him.”

KU freshman and Free State High grad Joe Dineen played his first snaps as a Jayhawk against Duke. Dineen, who converted from safety to running back during camp after the injuries to Brandon Bourbon and Taylor Cox, ran six times for 28 yards, with a long carry of seven yards.

“I'm glad I put him in there to run the ball,” said Weis of Dineen, who spelled Corey Avery (16-87) and De'Andre Mann (12-65) in the game's final minutes. “He got his feet wet here today. He ran the ball hard and ran inside and ran outside and this was a good opportunity for him.”

I feel so bad for this football team. 10 more games left and none of them will want to play anymore. All there fight is gone. I wish the football players would let the front office the people who scheduled these games years in advance play the football games instead. They don't seem to care about our football team at all. I wish they all would get fired. That's how it works in the real world.

When this game was supposed to have been played, they were a 3 to 5 win team. The difference has been our game of rotating coaches. That's really not the scheduler's fault, though we could have forced them to honor their original commitment. I wonder what they would have said last year if we had told them that we weren't ready to play them and requested the game be deferred 3 more yrs?

Will still root for KU, always. But I am staying with my thoughts that it is talent more than coaching.

However, there is DEFINITELY a coaching problem. This team makes way too many mistakes, and STILL doesn't seem disciplined enough to not create ridiculous penalties.

Weis and Co do not focus on the details that gives this team the best shot at winning. He's better at politicking in front of the media than focusing on preparing his team to compete.

Definitely agree with the first 2 paragraphs, but don't see how anyone can make the definitive statements of the 3rd without being at practice.

This is absolutely a coaching issue. Mangino took a 2-10 team from his first season to 6-wins and a bowl game in his second season.

This team is mentally weak and does not understand how to bring it for 60 minutes. That is a total failure of coaching. These guys have talent; they completely lack desire.

The bottom fell out of the program during the Gill regime. It would take a comprehensive and enormous effort to straighten out KU football. I don't think that the KU administrators, the small football fan base, or the few donors really give a flip. As a result, the next coach will be a failure, too.

60minutes? They couldn't even bring it for the first snap.

To me it all came down to QB play. Cozart still overthrows everyone when throwing for more than 10 yards, takes too long in deciding to run, and bolts from the pocket way to early. When Cummings comes in, every knows that he will keep the ball 90% of the time and miss every throw too.

I wish we still had Heaps. Yes he would have been sacked more than Cozart, but at least now we have receivers that can catch his passes. He was definitely quicker at picking a receiver and throwing.

Agree that neither Cozart or Cummings are the answer. We need a guy who can throw because we have the receivers.

Sad thing is we have never seen Cummings run the spread offense without these handcuffs. Let the guy do what he came to ku to do run the spread.

Agree - but we don't have the O-line either.

I could jump on Cozart but this is so something we have seen for 3 strait years. I think it's a scheme issue. We don't adjust at the line and plays take too long to devolpe. Duke was 2 steps ahead the whole game. Cozart was under pressure to much. Many time it was a shown blitz and nothing was adjusted. Because it was on TV, couldn't see if our wideouts were open. But it seemed they knew every play we were going to run.

We don't use the whole field, we haven't used the field. We replaced the nations worse defense under Gill with the nations worse offense under Weis. It would be nice to get an article with a video segment showing our plays and how much space we use. For 3 years, scoring has been terrible. We have talent, just need to get better schemes and better spacing. Defense played decent, just got gassed. Changes are needed. Hopefully we can turn it around but not likely

What we need is the right play calls and for better decisions to be made. On almost every stretch-option play, Cozart made the wrong decision like he was afraid of getting hit. When he had green in front of him, he didn't take it. You have to make the other team defend that or get burned for it if they don't just like all the other teams do. If you can get 7 or 8 yards, then slide to avoid the big hits do it. It would force them to have a couple of guys that aren't up in the box which will open up the middle passing game(if the plays are called). They weren't. It was a day to forget for the fans, but the coaches and players better remember it. Duke isn't nearly as good as people thought they were, but Kansas was certainly worse than they should have been by far. There is not anything positive that can be taken from this game. Don't replicate any of it. Don't do it this way again.

Yikes, that game really got out of hand. How the team responds in the next few games will probably decide if Weis is our coach this year. Just a few thoughts I had on this game:

1) Our offensive game seems so shallow. Our RBs seems extremely talented (5.0+ ypc is great!) but if we can't stretch the field by executing successful passing plays we just won't get off the ground. It's on the coaches to fix that for next game.

2) I was really proud of how our defense really shut them down in a few of the drives. Unfortunately, they lost all the wind in their sails as the game went on. Our offense needs to help them out by getting them off the field more, but the big plays are what doomed us. 4 long TDs is high school ball. There are some assignment issues that need to be fixed.

3) Even though CMU isn't a chump team, I will throw my support behind these Jayhawks as we go into this game because it's the best shot we have at a win the rest of this season. We should be able to get some fundamental offense and defense practice before we go into conference play. I'm not saying we will or won't win anymore games, but CMU has to be a step in the right direction or this season will feel a lot like Gill's last one.

Mostly bad line play on both sides of the ball. It doesn't matter what kind of secondary and linebackers you have when the QB can sit back there and go to his 5th and 6th option because there is no pressure from the line. Offensive line gets shuffled around too much to gain cohesiveness. No enough depth along either line either. If that Bragg kid was close to winning the job, we should have started him and let him get a year under his belt if we can't do any better than this. I've been saying all along that Cozart is not the answer and he keeps proving me right. He missed throws all over the field. He just doesn't seem to have a knack for passing unless the guy is open by 30 yards. Even then, it's iffy. I warned all of you before the season started to temper your expectations. Are you going to listen to me now? We're a long ways from the bowl game some of you were so sure we would get to this year.

Everyone on here was telling me i was full of sht an not supporting ku when i said that our players was not any good, an now it seems our coaching is on the same level...right now a 5-7 season would be great, o wait we fire people around here when they go 5-7 an uses a few choice words. Well jayhawk nation you wanted a cupcake for a coach an now you got one. We should just stop playing football until we are serious with the program about what it takes to play at this level...If we run off coaches because they are not the nicest person around, we will never do sht...Football is tough an nasty an not Sunday school..SO BUCK UP KU AN GET A REAL DAMM GENERAL TO LEAD THIS PROGRAM.