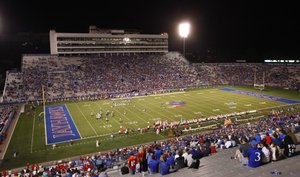 Saturday evening at Memorial Stadium, the anonymous donor who picked up the $500,000 tab that coincided with Kansas University officials’ decision to remove the track and replace it with turf, got a first look at what that money did for the KU football experience.

“I’d seen pictures,” the donor told the Journal-World on Sunday afternoon. “But I hadn’t been there to see it, and I was very pleased with how it looked, pleased with what they did, and I think it’s a definite step in the right direction.”

Like many within the athletic department, the donor said the best parts about Memorial Stadium’s mini-makeover was that removing the track and replacing it with turf made the place a little more pleasing to the eye and also safer for the players who play there. Like many fans, the donor expressed a desire to see more upgrades to KU’s football stadium in the near future.

“Hopefully, this is just a temporary situation,” the donor said. “I want to see ’em take it back out, lower the field and do some things to that stadium that really put us where we need to be.”

The reason behind the anonymity?

“The way I look at it, this is such a small part of what they need to do up there, and, frankly, just a small part of what’s going on with the entire university,” said the donor, who enjoyed Saturday’s 34-28 victory over Southeast Missouri State with a dozen or so family members. “I didn’t think it was a big enough deal to justify any publicity and, hopefully, it’s not gonna be there very long. I’m pleased. I’m glad we did it, and if we can play four quarters of football, I’d be glad about that, too. I was on Cloud 9 after that first quarter.”

It was not quite the performance he had hoped for, but sophomore quarterback Montell Cozart gave himself high marks for his opening-night effort.

“I had a couple of mental errors, and I went the wrong way on one play-action play,” he said. “Other than that, a great start to my career. I couldn’t have done it without the guys up front, the backs and the receivers.”

After the victory, KU coach Charlie Weis pinpointed the one area where Cozart’s presence under center helped the Jayhawks more than anything.

Asked if he would’ve liked to see Cozart run more, Weis said his young QB’s decision-making on when to take off was just fine.

“I’d rather he sit in the pocket and have protection,” he said.

After missing most of the second half of the 2013 season because of a head injury, KU senior Tony Pierson jumped back into action with a monster game, finishing with 95 receiving yards on four catches, 44 rushing yards on three carries and a 67-yard highlight-reel touchdown catch in the third quarter.

“It was good for Tony,” Weis said. “Guys like Tony, you like to see if you can’t get the ball in his hands about 10 times a game. But it’s not always going to go exactly as you dial it up unless you put him in the backfield and make him a running back and hand it off to him.”

Weis said what happened Saturday was pretty close to the formula for getting Pierson involved in the game plan but reemphasized that the senior’s health remained a priority.

The 2-0 Duke Blue Devils opened as 20-point favorites over the visiting Jayhawks, according to the oddsmakers in Las Vegas. By Sunday night, the spread had dropped to 16.

Duke, a high-double-digit favorite in each of its first two games, knocked off Elon and Troy by an average score of 43-15.

Let's hope steps are now taken to improve the stadium following this season even if it's in phases.

Contributions by donors are indispensable to the vitality of The University. This guy is a class act and a true Jayhawk. It's easy for us non-donors to talk about what needs to be done, while these guys are the ones actually reaching into their pockets. Having said that, the campus and its facilities need upgrades to continue to be attractive to students and athletes. With regard to the latter, it's nice that progress is being made on housing Naismith's original rules. But to remain at a high level athletically, a new housing facility for the basketball players needs to be built. Like it or not, basketball is the bread and butter brand for Kansas. Attracting top-notch recruits is necessary to keeping it that way, and therefore any money donated is an investment in the viability of the athletics program. In addition, the football stadium needs renovating. Initially something with fewer seats (to save cost in the short term, which also recognizes the low public attendance at football games) with architecture that would be condusive to future additions, concourses with more amenities, entertainment venues akin to Royals stadium to draw the public, and something more aesthetically pleasing than the current edifice of Memorial. I like the idea of keeping the view open from the Hill. But the housing and the stadium are obviously the next big projects for the University.

With fewer seats? It doesn't cost them anything to keep the seating the same. Some of the other things you said may be true, such as more amenities, larger concourses for more vendors, and some other forms of entertainment in the stadium that can be enjoyed outside of football season. The new Cowboys stadium includes an Art Museum, for example. I'm not sure if there is an American Art Museum in Lawrence. That might be a good start.

The Ballpark in Arlington has permanent office space leased to outside businesses built into the stadium. There is also the home run deck bar and grill open every day except for Christmas Day.

Fewer seats make room for wider concourses. This is exactly what the Royals did with their stadium (of course the layout of a baseball and football stadium are a little different, but even so). Yes. Fewer seats. It's not as if fans are filling 50,000 now, or would fill 60,000 of them with an expansion. Make the slope steeper so fans are on top of the action, and use folding seats rather than bleachers. A first phase of construction could reduce capacity (to say 45,000) while making room for other amenities (pressboxes and special skybox seating for donors), and when there is more money and greater fan attendance, a second phase could expand to accomodate the fans.

Okay, I'm the first to admit that we didn't look good opening night but Duke as a 20 point favorite? 20 POINTS? That is a big spread. The problem with trying to blowout a team that has a mobile quarterback like Cozart is that you need to limit their time of possession and Cozart will at the very least be able to steal us some first downs here and there. It's hard to quantify what it gives you but I would say having a quarterback that can run increases your time of possession, number of first downs and therefore your field position. None of that means you will score more points or even be a better team but it does make you a little harder to blowout in my opinion.

I think it is awesome that donor are willing to fix the stadium and have high hopes for the future. I love the game day atmosphere from the hill just as much as anyone but here are some things I think should be done that could fix attendance or get more people in/stay.

1) Do not allow people to re-enter the stadium once they have come in, that forces people to stay or just not come. If people have tickets they will either sell them to people who want to come or they will stay the whole game to get money worth or to actually support the team. (hopefully)

2) Sell alcohol at the stadium. I have a feeling that the NCAA prohibits this but it is something that should be looked into.

3) Stadium renovations- Yes we all know the stadium needs a face lift. I would really like to see some stand put in on the south end and at least come up to the score board. Why would people pay when they can watch from the hill. Close it up a little so you can still see the hill but people have to come in to watch. And yes drop the field, bring the stands in a little closer on the north bowl and close that off.

Those are just 4 things I think can be and should be done soon.

Selling alcohol at college venues is trending up. It’s not banned by the NCAA and some schools are opening up to the idea for added revenue.

Personally I think they should sell it at Memorial Stadium. It would definitely keep the fans there for the second half.

A key upgrade would be for the fans to go the games and make noise. I mean 120 to 130 decibel noise when the opponent's office is on the field. No way SEMO scores any more than their first TD, if any at all if that happens. When the stadium is that loud, they beat Kansas State, they beat Missouri when it was that loud, they beat Nebraska when it was that loud. Fill that stadium up and show some pride. That players feed off that. Kansas really doesn't have a home field advantage because the fans don't make noise, and they don't fill up the stadium.

I cannot agree with you more Micky. As an ex football player, the adrenaline you get from the crowd being loud and cheering you on can give you the boost and belief that you are better than the other team. I still feel like if fans show this team the support they deserve we will see more wins.

Give us a coach that knows how to recruit talent, develop talent, prepare for game day, build a program for long term success, and make in-game decisions that gives us the best chance to win, and I'll drive from Springfield every home game to be there.

I refuse to spend that kind of money based on the product we have before us. Ashamed at our University for making the decisions to foolishly tear down a football program that historically has rarely been there.

If the program ever comes back, I'll start buying season tickets again.

The university didn't create the 7 game losing streak that was the beginning of the end, though it is easier to forget the conference games in 2009.

actually Doug do us all a favor and just stay away.