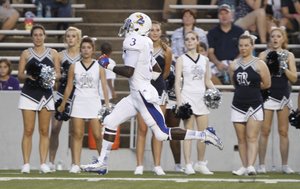 Charlie Weis said he knew what his first play-call as head football coach of Kansas University would be months ahead of time. A flea-flicker from Dayne Crist to Kale Pick, it worked to perfection for a 43-yard gain. Second play: Tony Pierson rushed for 13 yards.

Two plays into his KU career, Weis’ offense averaged 28 yards a snap. Two seasons in, it was among the worst handful of offenses in the Football Bowl Subdivision.

So, really, John Reagan’s call on his first play from scrimmage as KU’s offensive coordinator won’t mean much. Still, it’s fun to try to guess what it might be.

Montell Cozart, the Jayhawks’ sixth different Week 1 starting quarterback in six seasons, said Wednesday he had no idea yet as to the nature of the first play.

Here’s hoping it will carry symbolism and represent the change from a stale offense weighed down by too many slow-developing plays. Here’s hoping it’s a bubble screen from Cozart to Pierson, the fastest, most exciting player to watch with the ball in his hands.

“I love screen passes,” Pierson said. “I’ve got the big boys in front of me, blocking for me. I love that.”

“Justin loves blocking, and I love him for that,” Pierson said.

A native of East St. Louis, Illinois, the likeable Pierson came to KU as a shy, 150-pound running back. He now weighs 177 pounds, which is the equivalent of a 200-pound athlete beefing up to 236 pounds in four years. He’s far more comfortable doing interviews and has no trouble talking about how raw he was as a receiver a year ago, his first.

“I was just out there running around, using my speed,” he said. “Now I can actually run a route.”

Fifth-year senior transfer Nick Harwell, a three-year starter at Miami of Ohio, practiced with Pierson last season but was not eligible to play in games because of transfer rules. Asked to grade Pierson as a receiver on a scale of 1 to 10 last season and this season, Harwell cooperated.

“A year ago, athletically it was easy for him to transition from running back to a receiver,” Harwell said. “As far as him being a receiver a year ago, I’d give him a 4 or a 5. He could always catch the ball, it was just his route-running. Right now he runs great routes and pushes me. We run routes together. I feel like he’s just as good a receiver as I am.”

Pierson undoubtedly has grown into the receiver position, but as good as Harwell? Never discount the possibility that Harwell, a smart, sly guy, was talking directly to opposing defensive coordinators, letting them know they would be wiser to double-cover Pierson and not pay any extra attention to him. It won’t work, but it was worth a try.

It’s no secret Pierson can fly. If he can avoid concussion problems that have dogged him in the past, and if he is even close to as good as Harwell maintains, he could be primed for a loud senior season.

I think that play to Pick was a big sign of things to come. If I remember correctly, Pick had about half the field to himself and Crist still under threw him badly. Any accuracy whatsoever and it would’ve been a walk-in touchdown.

Then after the nice run by Pierson, he got stuffed twice and we missed a short field goal. Blech! I just want to forget that whole season.

That was one of a handful of awful throws by Crist. I watched every single minute of every game. Crist showed good accuracy plenty of times only to see the ball bounce off his receivers hands. Coach Weis should have known better. A pocket passer will never work with a still developing offensive line. We needed improvisation, we needed Todd Reesing. Same with Heaps, horrible choice of skill set for what our current offense was. Both Crist and Heaps are very talented and pretty darn good kids by all accounts. If anything, they should be mad they came to KU and wasted their final year(s) here in a system they never belonged in.

At least Heaps still might have a chance at Miami. The freshman QB looked terrible in his debut. Heaps may end up getting a shot if that continues.

"If anything, they should be mad they came to KU and wasted their final year(s) here in a system they never belonged in. "

I understand there is a tendency to bash Weis for any and all reasons at times, but this statement doesn't really make sense. First, Heaps (and Crist) were pocket passers and Weis attempted to run a pro style offense developed specifically for their perceived strengths. We would all agree that didn't work out, but the QB doesn't get a free pass.
Second, if Heaps was so good why didn't he beat out the freshman QB (who did not appear ready against Louisville) at Miami?

Don't get me wrong...I do think both Crist and Heaps appear to be stellar people and I wish them both the best in whatever they do. But we still need to have some perspective when determining why the offense didn't work the last couple of years.

I'm a little confused. Are you disagreeing with me? Yes, Weis did his best to implement a pro style offense with a pro style quarterback. What we didn't have was pro style protection for them.

No reason to be mad. It wasn't like they were giving up PT @ ND/BYU, or in Dayne's case even had a chance to return. Maybe there was a Wisc or someone ready to pick them up, but it didn't look like they had many opt. In Dayne's case, I'm guessing he got shots at the NFL because he came back to play for CW. It will be interesting to see if the same benefit is extended to Jake after transferring. I wonder how amicable that decision was.

I'd also mention to anyone who questioned Crist's arm that he did spend some time with the Ravens before being cut. I promise you, you don't get that opportunity if you can't spin a ball.

Agree with Kellerman. Crist and Heaps are talented dudes, but were at the wrong place at the wrong time. No O-line and no receivers that could catch.

Thought Crist was a little skiddish in the pocket though.

In light of my prior statement, I should point out that I do agree that KU lacked linemen and receivers that contributed to Crist's and Heaps' struggles. That said, I think there was something to Keegan's recent analysis of Heaps.

I hope great things for Pierson.

A healthy, electrifying year, with a draft selection to boot.

Is it Saturday yet?