Kansas senior forward Ali Kimura (12) is all smiles as she celebrates a her goal with teammates that broke a 0-0 first half tie during their game against Wake Forest at the Jayhawk Soccer Complex on Sunday afternoon.

Kansas Soccer vs. No. 24 Wake Forest 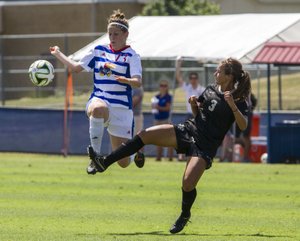 Kansas University soccer coach Mark Francis, soaked from the neck down, spat some water out Sunday afternoon at Jayhawk Soccer Complex and smiled as he addressed his team after a 4-1 victory over No. 24 Wake Forest.

“I knew you guys were up to something,” the 16th-year KU coach said, “because you were acting really weird.”

The Jayhawks, as a way to celebrate Francis’s 200th career victory, had just doused their coach with a sneak-attack cooler shower. Senior midfielder Jamie Fletcher told him the milestone meant either he’s a good coach or really old.

Francis couldn’t mind the good-natured jab, though. Not after the way KU played to reach 4-0 for the first time in five years.

“It’s one of the best games we’ve had on this field, I think, in a long time,” Francis said.

Kansas wasted little time in the second half putting Wake Forest (1-2) away. Mayr won a 50-50 ball from a defender in the 48th minute and pushed an attack into the box before drawing a foul. Then junior midfielder Liana Salazar easily rolled a penalty kick into the right side of the net.

Twenty-nine seconds after extending the lead to 2-0, KU sophomore defender Aurelie Gagnet sent a cross in to Kimura, who re-directed it into the back of the net.

“We got that momentum going,” Kimura said after scoring her third goal of the season, “and we just fed off that. It was great.”

The senior from Overland Park could’ve scored a third time in the final minute, when she broke free for a one-on-one with Preston, but she chose to feed Salazar on the left side, giving the Colombian junior her fifth goal of the season.

Kimura said it would’ve been awesome to net a hat trick, modestly adding that Salazar had an easier shot.

“It’s more important the team scores, rather than me scoring,” Kimura said. “We just look for each other, play off each other and get the job done.”

Wake finally got a shot past senior KU goalkeeper Kaitlyn Stroud (four saves) in the 82nd minute, when Riley Ridgik scored on a free kick from more than 30 yards out.

Stroud returned to action after a one-game suspension for violating team rules, as did senior defender Caroline Van Slambrouck. Both started and played all 90 minutes.

Kansas plays its first road games of the season next weekend, beginning with a 5:30 p.m. Friday meeting with Colorado.