Clark Talley, Lawrence resident, 70, first had his Bible signed by Phog Allen in the mid-50s. Since then, he has managed to add signatures from Bill Self, and most recently, Ted Owens, Larry Brown and Roy Williams last Monday at the 60 years of Allen Fieldhouse celebration. 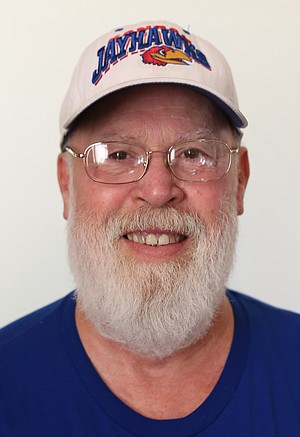 Last Monday’s 60 years of Allen Fieldhouse celebration was supposed to be all about the old Kansas University basketball arena that has served as the stage for some of the most memorable moments in the program’s storied history.

But for one Jayhawk fan and Kansas native who recently moved to Lawrence, it was about making a life-long dream come true.

Clark Talley, 70, grew up in Wetmore, 30 minutes outside of Hiawatha. When he was around 10 years old, sometime in the mid-1950s, he met legendary KU men’s basketball coach Phog Allen when he spoke at a church camp Talley attended. Already a huge Jayhawks fan by that point — “Clyde Lovellette was my hero,” Talley says. “And the team of ’52. I patterned my hook shot after his.” — Talley was in awe of Allen the entire time. After the man for whom Allen Fieldhouse is named finished addressing the campers, Talley approached him and asked him to sign his Bible. Allen obliged and in red ink on one of the first few inside pages signed his name, “Forrest C. Allen, Phog.”

Always a treasured possession, the book became even more precious in 2008, when Talley had current KU coach Bill Self sign it on the same page in black marker, just above Allen’s signature. According to Talley, Self was very interested in the history of the book when he signed it at an event in Concordia shortly after KU won the 2008 national title and did not hesitate to add his name to it.

With two of KU’s eight legendary head coaches now represented, Talley began to brainstorm ways he could add to his collection.

“That’s basically been a life-long ambition of mine to get the others to sign it,” he said.

And when he heard about last Monday’s event, which included featured guests Ted Owens, Larry Brown, Roy Williams and Self, Talley knew he had to get there to make it happen.

He arrived just after 7 p.m. for the event that began promptly at 7:30. Not knowing his angle or how he could possibly make this happen, Talley lingered near the tunnel that the players and coaches run out of prior to the start of each game to see what he could do. Bingo. Just before 7:30, Talley caught Brown walking onto the Fieldhouse floor and approached him about signing the Bible.

“After I told him what it was and asked him if he wanted to sign it, coach Brown signed it and said, ‘You just made my day,’” Talley recalled.

One down, two to go.

With Owens and Williams already seated on the floor and Talley’s seats in the bleachers at the north end, the retired high school journalism teacher waited patiently and soaked up all of the sights and sounds, laughs and smiles of the night. When the event wrapped, he and a neighbor made a break for the floor and the final two coaches in the project.

“We just kind of bulled our way down there afterwards and got it done,” Talley said. “Coach Williams was signing a basketball and that’s when I got him to sign my Bible.”

After that, Talley went over to Owens, who was still seated at his table, and got him to sign the Bible, as well. From left to right, the signatures of Brown, Williams and Owens now surround Self’s in black ink and Allen’s in red in the form of an arc over the top.

“As soon as they heard Phog Allen was involved they all were very interested and excited,” Talley recalled. “They all have such great respect for him.”

It’s hard to say if another piece of KU memorabilia signed by all five coaches exists, but the mere thought that he now owns one overwhelmed Talley.

“I was pretty tongue-tied and shaken up there,” he said. “But I’m so appreciative that they all signed it.”

In an ironic twist, as a twenty-something young adult I used to party in the Wetmore bar. There is NOTHING in the town to speak of, but every Friday night that sleepy town hosted one heckuva shindig. Never saw Clark Talley, though. Not hard to imagine why not.

I have always been proud of Forrest C, "Phog" Allen's autograph from the 1950-51 Russell, KS HS 'Bronco' Athletic Banquet, at which he was the Guest Speaker. Jack Gardner, the Kansas State Basketball Coach spoke at the 1951-52 Banquet; A.C."Dutch" Lonborg, KU Director of Athletics was Guest Speaker for the 1952-53 Banquet; and Bill Meek, Kansas State Head Football Coach, spoke at the 1953-54 Banquet. Looking back ~ it's kind of an amazing lineup for a HS of 350-400 students, and a community of 6,000 population. Russell HS did have some state championship basketball teams during that period of time, as well as two players ~ Blaine Hollinger and Bob Billings ~ who played for KU with Wilt. I also became a Jayhawk during the Lovelette, B.H. Born era.

It all makes me wonder if there is actually any news on this year's team, given the first exhibition is just a few days away ...

Was wondering the same exact thing....

What a wonderful story. As for news on this year's team, I think we can take a break for a couple of days and relish the past. Be patient, the season starts in just 3 days, and I am sure that it will be another memorable one.

You do not want any news stories about the team until games start. Off season news stories are usually about injuries or someone getting in trouble. Starting Monday let the stories begin!

or a recruitment/commit update, or things to look for, or season/conference predictions, or how the freshman are adjusting to campus, or teams that will be challenges this season, or will there be any adjustments this year with the players skill set we have, what to expect when we play KY and how that will differ when we start conference play, to name a few things.

There were two stories on Coach picking up the tab for lunch, Two! Nice to hear but this is our basketball team, this is a preseason Top 5 team. A little effort would be nice.

What in the world does that have to do with ANYTHING?

I am with you Nathan!