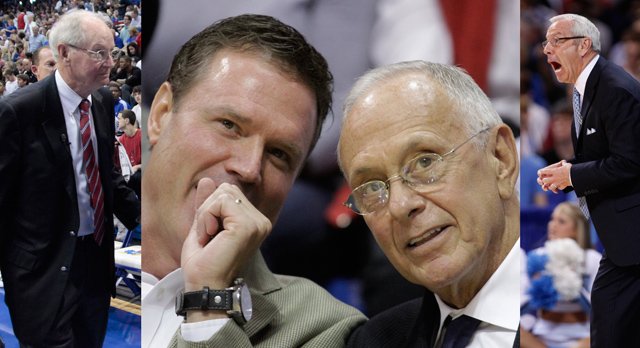 Referencing a LJW article a couple of days ago, apparently 7,000 is all Self has targeted for this fundraiser.

Abby Hoffman drew more (8,000) when he spoke in AFH on April 8, 1970 (http://kuhistory.com/articles/hoffmans-huff/), which followed up by burning the Student Union on April 20th (Hitler's B-Day).

Wow, who thought Frank Mason would be starting at point? Uh wait a minute, a few people did. Not naming names though.

LOL, I was one of them that thought he'd be starting at the beginning of the season. Given the growth we saw from him last season, my only concern all along has been (and remains) his vocal skills....and perhaps his outside shot.

Self's been very clear he wants a PG to push the action so there has never been much doubt but we shall see how Graham and Selden (on occasion) perform.

Might see you tonight. We are going to the 23rd Street Brewer before for dinner.

Suzi as you recall, there were more than a few, who this summer thought Frankamp, or Graham would start at the point and some like you think Selden will occasionally play the point and this might occur for limited minutes depending on the opponent. Frank, as I've said repeatedly is extremely quick, strong, athletic, and tough. His outside shot has improved significantly and I think he will be a strong on ball defender. Hopefully we can all give him the support he needs to lead what could be a very strong 2014-2015 KU basketball team.

I agree with your assessment of Mason. My only negative comment is that he doesn't create for others as well as I would like. I think this is why Devonte may give him a run for his money as a starter.

Frank Mason is the logical starter for the beginning of the season. Devonte Swing will give him a run for his money as the season goes on. Connor will be used as a sharpshooter off the bench. He will be played at the 1 and the 2.

Frank at this point of time, makes sense (I still think Graham is the best choice for PG but might not be ready), but to be honest Self has been all over the place on his preseason remarks. I think he is ready to start the season like all of us are.

Black made the cut for the Houston Rockets! It could not have happened to a better more worthy guy.

Great News he has worked for it, this has to make him feel vindicated in his choices and how he prepared himself.