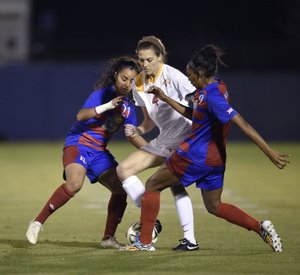 While the Kansas University women’s soccer team has split its home games this season between Rock Chalk Park and Jayhawk Soccer Complex, KU has had no trouble winning at both places.

The No. 15-ranked Jayhawks set a school record for home wins with their 10th when they defeated Iowa State, 2-1, Friday at Rock Chalk Park.

Junior Liana Salazar scored both Kansas goals, capitalizing on a penalty kick in the sixth minute and recording what turned out to be the game-winner in the 86th.

The penalty kick was set up by Jamie Fletcher, who was fouled in the 18-yard box. Salazar and KU coach Mark Francis credited Fletcher’s aggressiveness on offense and defense for playing a big role in the Jayhawks’ victory.

“Fletcher was really good today,” Francis said. “Defensively, slide tackling, winning balls in the air, I mean she kind of did everything. She was involved in the attack.”

The Jayhawks registered the first 12 shots of the match, but could not build off of Salazar’s goal, taking a 1-0 lead into the break. The shots and corners continued to mount for the Jayhawks in the second half until Salazar gave Kansas an insurance goal.

Salazar redshirted her freshman season, or she would have been honored Friday for Senior Night with six of her teammates. Winning Friday’s game meant a lot to Salazar so she could help send the six seniors out in style at Rock Chalk Park.

“It’s sad to see them, like, go pretty much because I came (in) with them,” Salazar said. “They deserve the win. They’ve been a huge part of this program.”

Salazar’s Big 12-leading 11th goal proved to be a big one for the Jayhawks as the Cyclones scored less than two minutes later when ISU’s Koree Willer cut KU’s lead to 2-1.

The goal was Iowa State’s first in Big 12 play, but that was as close as the Cyclones would get.

Francis was pleased with Friday’s outcome, but he thought the Jayhawks should have had a little bit more breathing room late. KU outshot Iowa State, 35-10, and had an 9-1 edge in corners, but Cyclones’ goalkeeper Andrea Swanson made 13 saves to keep ISU within striking distance.

“I’m a little bit disappointed that we didn’t score more goals,” Francis said. “We had obviously some good opportunities. Iowa State defended really well. Once we got in there, their keeper made some good saves so you got to give them credit for that.”

The Jayhawks will end the regular season Friday at Oklahoma before heading into the Big 12 Championship tournament Nov. 5-9 in Kansas City, Missouri.

“It’s nice that we only have one game this weekend,” Francis said. “It allows us to rest up a little bit.”