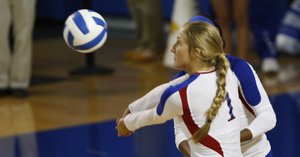 A popular senior starter and returning All-Big 12 volleyball player, Chelsea Albers was mobbed by adoring grade school fans in the interview line after blasting a match-high 10 kills in Kansas University’s 3-0 rout of Texas Tech on Saturday in Horejsi Center.

“I know some little girls. They love her long hair. I’m like, ‘I guess you can be the favorite player, but it’s (because of) your hair,” fellow senior Sara McClinton theorized recently regarding the popularity of Albers, a 6-1 hitter from Papillion, Nebraska.

“Chelsea is super competitive. She wants to win,” McClinton, a human biology major from Omaha, Nebraska, said of Albers, an exercise science major who ranks in the top 10 in the Big 12 in kills and points per set. Albers is also third on KU’s team in digs and fourth in blocks.

“That is something I’ve focused on awhile,” Albers said of her blocking after helping hold Breeann David to eight kills. “It gets frustrating if it (blocking game) is not on. Once it’s on, it gets the ball rolling. I do enjoy that,” Albers added.

“I love volleyball, so every part of it I take pride in. I work hard to make my game more well-rounded. I hope to give more to my teammates than I take.”

KU has won four of its last five matches and is two games behind Kansas State and Oklahoma (6-2). Texas is 7-1.

“That’s not a terrible start. I think we can have a better (second) half of the conference,” Albers said. “I think that’s what we’re planning on doing, but as of now we’re in a good position to still do well in the conference and that’s what we are focused on.”

proud of our lady hawks. keep up the good work ladies and you'll be fine just take of businesss and it will all work out hope you have a great 2nd half of the season and then march on to the tourney. you have represented the university of KANSAS with a great deal of success and this is one life time Jayhawk fan who is not afraid to say how proud I am our the lady hawks. I think you get over looked by fans because of our men's basketball a lot and I'm guilty of that also to a certain degree and for that I apologize but that's not to say that I'm not proud of the good job your doing and you should be proud also but yet still hungy never ever let this happen and that is complacency sorry not sure if that's how its spelled or not but again good luck I for one am backing you .GO LADY JAYHAWKS